It Is Time To Take Far-Right Extremism Seriously

For the record, some are, but many aren’t. How do I know? I spent nearly 20 years involved in the far-right and, today, having left, I now run a charity called Exit Hate UK which seeks to help people leave extremism and supports families with a loved one involved.

My journey into the far-right

My journey into the far-right started as a young 15-year-old in Birmingham who was handed just one leaflet outside the school gates. So powerful was the message on it, a door opened for me into a world of extremism, hatred, violence and massive remorse and regret.

I joined the far-right as a youngster because I hated terrorism. The leaflet I was given told an horrific account of a young mum who walked into an Irish Republican Army (IRA) bombing and how she never went back home to her husband or children. I heard the call to action – “If you think this is wrong, join us!” – and that is exactly what I did.

Joining a local group against terrorism, I thought I was becoming part of something constructive that would make the world safer. But, over time, I succumbed to a message of hate and violence. Slowly but surely, extremists groom, listening to people’s stories, looking for a way in. For me, it was my hatred for the IRA and violence, but also because my mom at the time was dying of cancer and, on finding this out, the far-right offered me a lifeline. They told me that, if they got into power, they would ban all overseas aid and invest in the NHS, so people like my mom could get the drugs she needed. That simple message gradually helped me become racist, seeing people from other countries taking money that I thought at the time should be invested here in Britain.

Over time, I went from one group to another, each one more extreme than the last, as my hatred and anger grew. With my mom passing away when I was just 18, my dad killed in a vehicle accident when I was 23, and with no brothers or sisters, the far-right became the family I needed.

I joined the National Front, for whom I was a foot-soldier, attending demos and meetings and even setting up a number of Rock Against Communism bands, like Buzzard Bait. Eventually though, tiring of trying to bring about electoral change, I wanted more. So, I became an organiser in the West Midlands for British Movement, an openly Nazi group, where I also developed a publication called Europe Awake. Later, I became a recruiter and organiser for Combat 18. Along the way, I also joined the Ulster Defence Association, as well as the racialist Church of the Creator, which advocated racial holy war (RAHOWA). My journey should be one that not only shocks people but should also act as a warning in terms of how easy it is to become a far-right extremist and how damaging it can be – to the individual involved, their family, the community they live in and the country they say they love.

Eventually, sickened by the violence and the holes I started to see in an ideology that gave me everything, I decided to leave. Unsupported at school and then in the community, it was a lonely journey, never trusting anyone and having to hide and lie about a past I regret every day. Leaving the far-right was horrendous and rebuilding a life away from hate as a ‘former’ is one of the most difficult things anyone can do. But it can and must be done.

Turning a negative into a positive

Today, I run a charity called Exit Hate UK which seeks to reduce extremism through education, compassion and understanding. Engaging with people one-to-one, we look to challenge people’s beliefs, highlighting the reality of extremism and slowly bring people away from hate.

Having difficult conversations is challenging, but if we really want to break the cycle of hate then we need to understand all extremism is wrong, that extremism solves nothing and that it only makes things worse. Looking for answers to the issues which extremists feed on, we need to look at why people join these groups, provide a safe space to talk and support people over the long term. This is exactly what Exit Hate UK seeks to do.

As a young man, I had no support, teachers ignored me and friends walked away, tired of arguing with someone who wouldn’t listen. But people have to hang in there, take the emotion out of what is being said and look beyond labels such as extremist or Nazi to see the individual.

Having worked with hundreds of people involved in the far-right, no-one has ever said their involvement was positive. Many join not because they hate, but because they fear something or care and want to make things better.

We need to fill the gap

What we, as a society, need to do is fill that gap, step forward and challenge extremist narratives so we don’t lose our sons, daughters, parents and loved ones to extremists who simply use people.

Instead, we need to invest in supporting people to leave and then, afterwards, support them long-term to deal with what we call ‘Involvement Trauma’. The heartache, memories of violence and the activities people took part in never go away and people need support to come to terms with that, take ownership of what they have done and said, and then look to create a positive way forward.

Supporting people to exit the far-right is not straightforward. Many walk away, seeing the task as too difficult or scared of what some might think about them talking to racists or Nazis. We don’t, and we are there every step of the way, 365 days a year, offering free support to anyone who needs it, as we believe no-one should be alone.

As a small charity with a big heart, we know we are not the only path out of extremism and, alongside programmes like Prevent, we seek to offer safe spaces to reflect and get people away from danger. That way, there is always hope that, together, we can beat extremism.

Exit Hate UK is a charity made up of former far-right activists who have spent many years involved in the far-right and have now left to live fulfilling lives. We help people leave far-right extremism and we support families with a loved one involved.

We reduce far-right extremism through education, compassion and understanding. We believe we can create positive change by showing people how all extremism is wrong and achieves nothing, but we need a little help to pay staff wages. 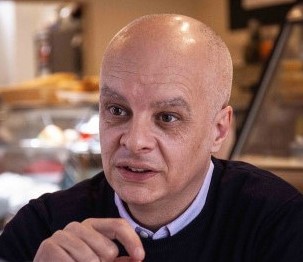 Born and raised in Birmingham, Nigel spent nearly twenty years in the Far-Right. Joining at a young age, he went on to become involved with several Far-Right organisations, before leaving and rejecting his Nazi past. Using his unique personal experience, understanding and knowledge, Nigel is the founder of Small Steps, a specialist counter Far-Right education company that provides training across the UK. In addition to this, Nigel set up Exit Hate UK, a nationwide charity dedicated to supporting people through mentoring to leave the Far-Right and helping families with a loved one involved.

Born and raised in Birmingham, Nigel spent nearly twenty years in the Far-Right. Joining at a young age, he went on to become involved with several Far-Right organisations, before leaving and rejecting his Nazi past. Using his unique personal experience, understanding and knowledge, Nigel is the founder of Small Steps, a specialist counter Far-Right education company that provides training across the UK. In addition to this, Nigel set up Exit Hate UK, a nationwide charity dedicated to supporting people through mentoring to leave the Far-Right and helping families with a loved one involved.