Refugee Week: How Can You Get Involved Online? From Theatre To Cooking

To mark Refugee Week, theatre and arts groups across the UK are hosting a variety of online events exploring the experiences of refugees.

Held annually since 1998, Refugee Week is a festival that celebrates the resilience, contributions and creativity of people who have fled their countries.

While the coronavirus pandemic has limited social gatherings this year, there are still plenty of ways to get involved online, including film screenings, cookery classes, live performances and panel discussions.

We take a look at some of the theatre groups and arts collectives that work with refugees and people seeking asylum, alongside some of the events that you can still catch this week. 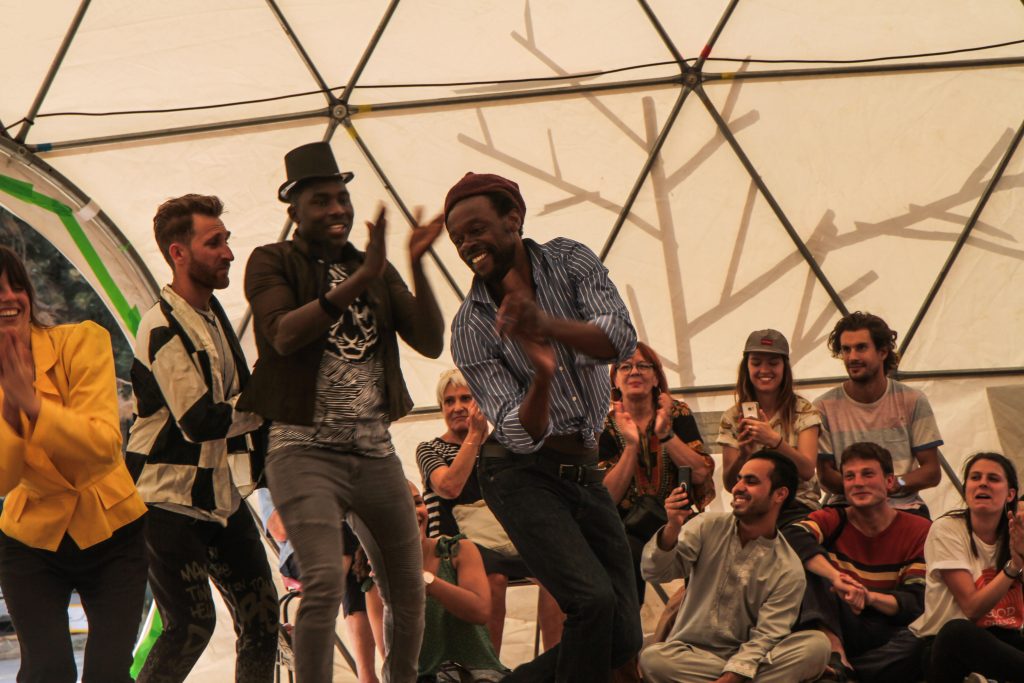 Born out of “the Jungle” refugee camp in Calais in 2015, Good Chance works with artists around the world, supporting them so that they can share their stories. The charity also stages professional theatre productions, such as its critically-acclaimed 2018 play the Jungle, and builds temporary, geodesic dome theatres, with the aim of creating a place where immigrant and local communities can interact through the arts.

“I began working with Good Chance because, as a migrant I can relate to the feeling of arriving in a new country that has a different culture and language,” explained Dina Mousawi, creative producer at Good Chance. “Not long after arriving in the UK at a young age, I joined a performing arts school, which played a huge role in helping me integrate, but also to develop my creative skills, which has formed a large part of my career to date.”

For Refugee Week, the group is putting on various activities, including broadcasting live performances on Instagram with the recently-formed The World From My Window, a project that is collating stories of lockdown from all over the world. Good Chance’s poetry collective, called Change the Word, is also performing in a poetry show at the online Migration Matters Festival on Wednesday night (17 June), where there will be artists from DRC, Ethiopia, Guyana, Ivory Coast, Kenya, Pakistan, Sudan and UK.

Mousawi said that the group aims to bring the stories of refugees to mainstream attention in an accessible way. “By exploring the intricacies, commonalties and complications of the refugee experience, we hope to expose an audience worldwide to untold stories of global and national relevance, urging them to take action and promote change,” explained Mousawi.

Find out more about Good Chance by visiting its website: www.goodchance.org.uk 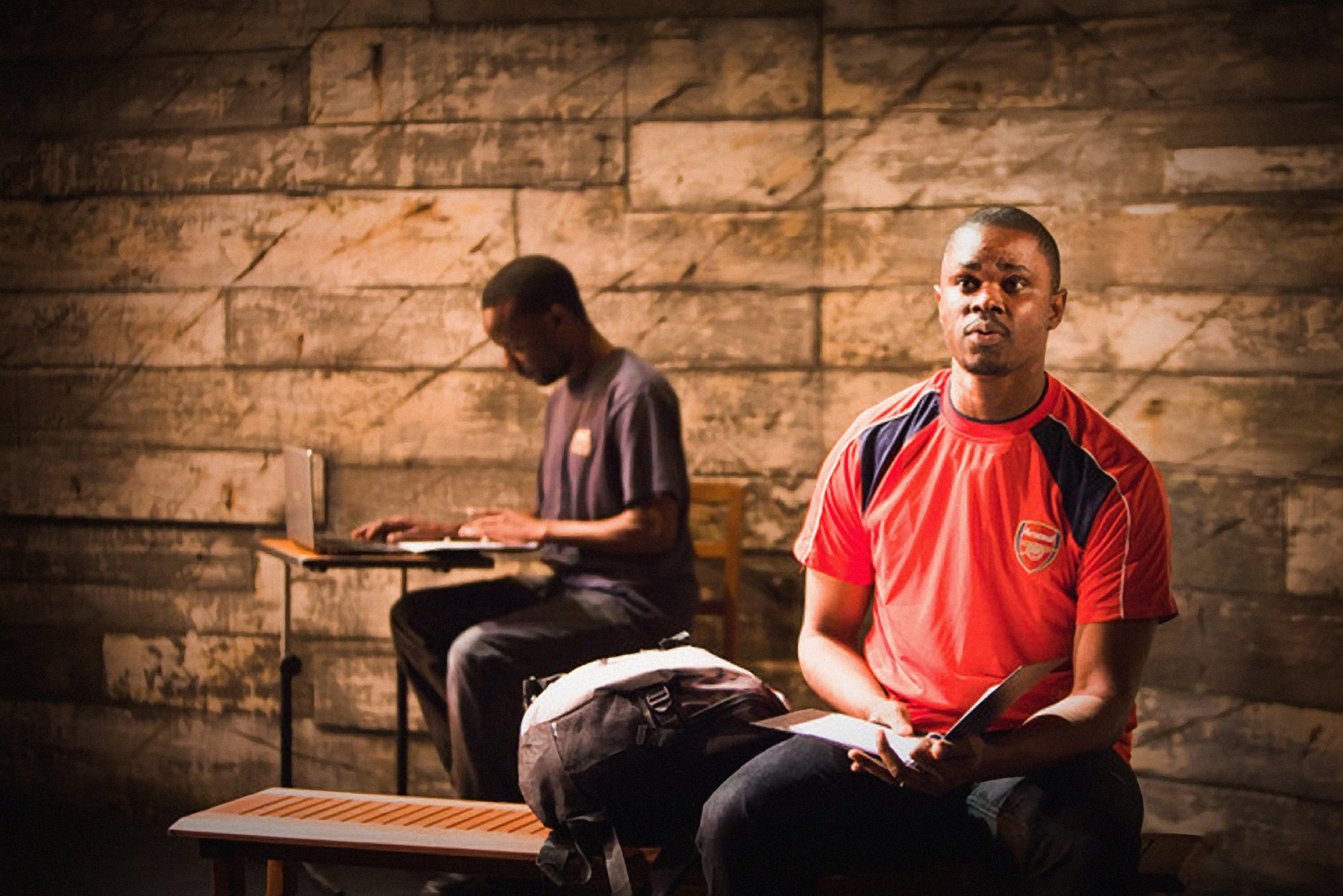 Performance of Souvenirs for ice&fire, April 2013. Credit: Courtesy of ice&fire

Founded in 2003, theatre company ice&fire was established by playwright Sonja Linden. While volunteering as a writer-in-residence for the charity Freedom from Torture, Linden was particularly moved by the story of one woman from Rwanda. She decided to use the woman’s story as the basis for a play, but found that no theatre companies were willing to take on the idea. So, Linden formed ice&fire to stage her show – I Have Before Me a Remarkable Document Given to Me by a Young Lady from Rwanda –  which was a sell-out in London and went on a nationwide tour.

After five years at the helm, Linden passed the reins on to her long-standing colleague Christine Bacon, who is now artistic director. Bacon explained that the theatre company focuses on human rights struggles because these are “one of the richest seams of human drama” and can be found in all societies across the world. “We try to tell human rights stories in compelling and dynamic ways, employing techniques theatre-makers have relied upon for millennia,” she explained. “We do this by appealing to our shared humanity and curiosity about the lives of others, and ultimately lead audiences to make connections between their lives, the lives of those whose stories we tell, and crucially, the systems of power that are ultimately responsible and need to be reformed or dismantled.”

Although ice&fire’s physical performances have had to be put on hold due to the coronavirus pandemic, the group is hosting a free and interactive online performance on the evening of 17 June, alongside its Asylum Monologues on 18 June, in collaboration with Ben and Jerry’s.

Find out more about ice&fire by visiting its website: www.iceandfire.co.uk 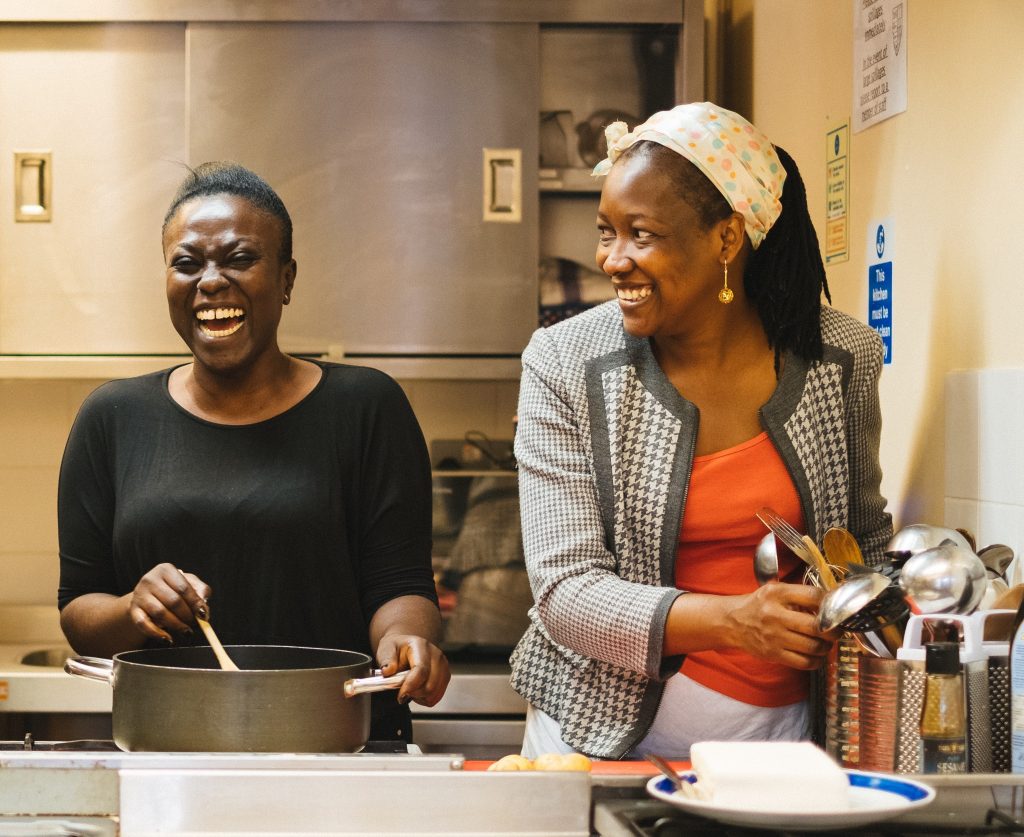 Set up in 2017, Migrateful is a charity that runs cookery classes led by refugees, people seeking asylum and migrants who are struggling to access employment. The group was founded by Jess Thompson, who had previously worked in refugee camps in Morocco and Dunkirk. In London, Thompson had also worked with a group of refugee women who were all unemployed, despite being highly skilled.

“I realised that cookery classes could be a means of employment which would allow refugees and asylum seekers to integrate while improving English skills,” she explained. “By sharing the food they love with others, there is a tangible application of their skills and this cultural exchange enhances the wider society.” Since being set up, Migrateful has supported 45 chefs and run 650 classes for 6,500 people. 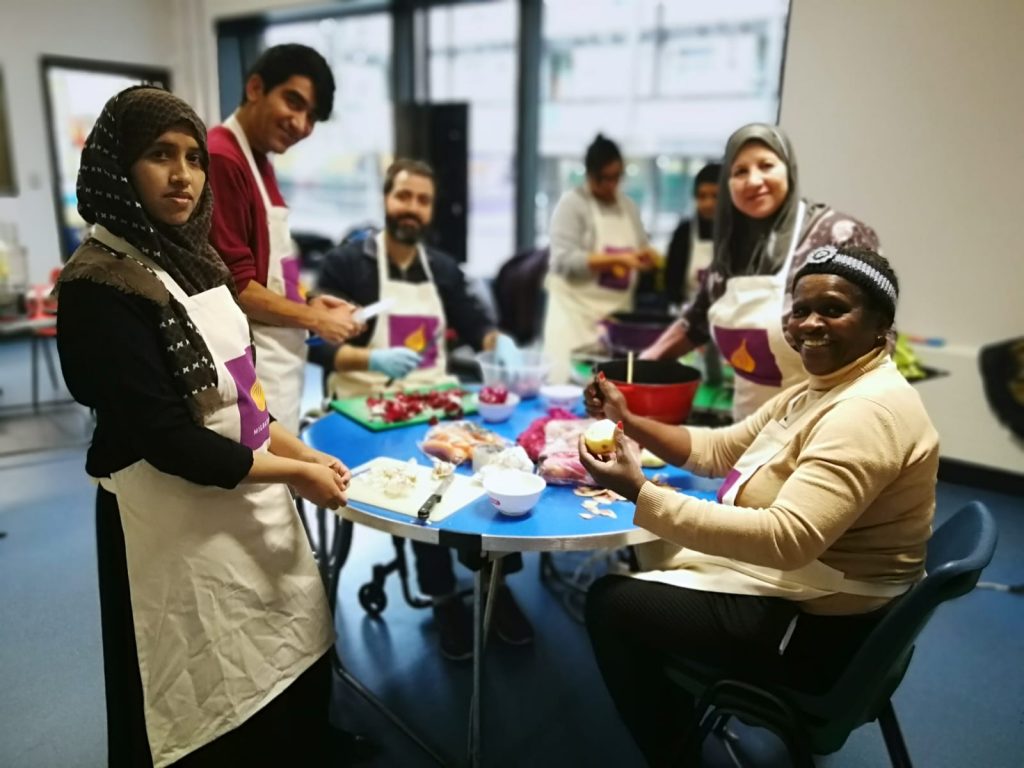 Although the coronavirus pandemic has created many challenges for Migrateful’s cooks, the charity is running a series of online classes run by its refugee and migrant chefs throughout Refugee Week. “The classes provide the ideal conditions for promoting contact with the general public,” explained Thompson. “To challenge stereotypes and inspire meaningful conversations around immigration.”

For Thompson, the main obstacle facing refugees and those seeking asylum is the lack of a support network, alongside legal, linguistic and social barriers that make it harder for them to obtain work in the UK. “Migrateful helps our chefs meet people, form a community and offers employment opportunities,” she explained. “Migrateful shows these chefs that they have a lot to offer and are really valued members of the community.”

Find out more about Migrateful by visiting its website: www.migrateful.org 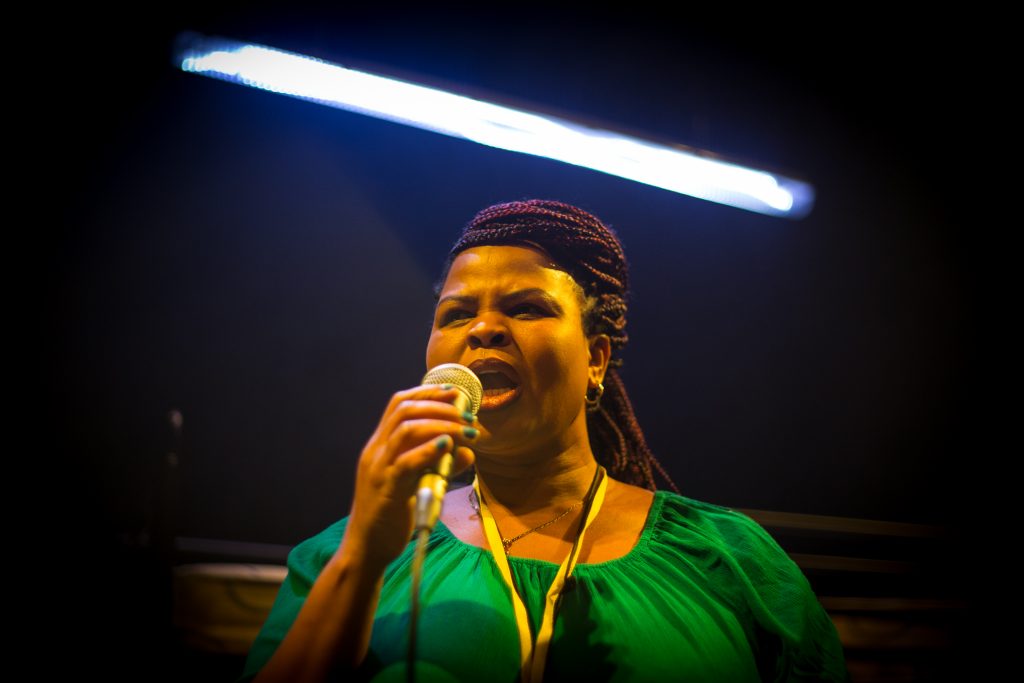 Theatre company Stand & Be Counted (SBC) puts on shows that promote social change and hold the powerful to account, including the stories of migrants and people seeking asylum. The company also holds educational programmes and creative workshops throughout the year for refugees and asylum seekers.

“There is an incredible amount of misinformation and misunderstanding surrounding the experiences of asylum seekers and refugees and what we see happening a lot is that these conversations happen without the people who are living it,” explained Rosie MacPherson, artistic director at SBC. “Theatre is such an important tool to platform the people we desperately need to hear from, on their own terms.”

SBC is running a host of events throughout Refugee Week, including performances, talks and films. These include a multilingual performance of its show Where We Began on Tuesday 16 June and a film screening of its production Tales of Love and Loss on Saturday 20 June, both of which are part of the Migration Matters Festival. The company is also part of a performance in collaboration with Artworks and Northern Broadsides as part of Refugee Week on the afternoon of Saturday 20 June, and is running a series of shows for the Coventry Welcomes Festival.

Find out more about SBC Theatre by visiting its website: www.sbctheatre.co.uk

Citizens of the World Choir 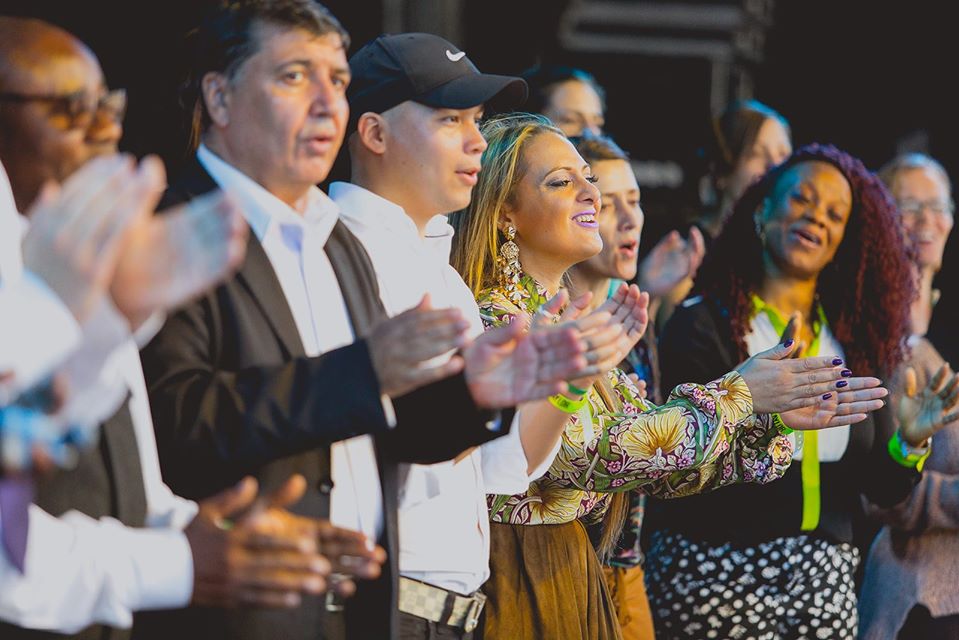 Credit: Courtesy of Citizens of the World Choir

Formed in 2017, Citizens of the World Choir is a choir of refugees and friends who sing together every Wednesday. Previously, the choir has collaborated with big names including Imogen Heap and Felix Buxton from Basement Jaxx. Due to the coronavirus pandemic, the group has moved online.

“Lockdown can trigger a lot of trauma for people who have experienced forced exile and detention so we’re very mindful that everyone will experience lockdown restrictions differently,” explained Berry-Hart. “We’re hoping that by reaching out and offering different and interactive singing rehearsals for refugees that we can help alleviate loneliness and isolation, and help everyone feel together even though we are apart.”

If you are a refugee who would like to join Citizens of the World Choir’s online singing community, you can email rachel@cotwchoir.com. 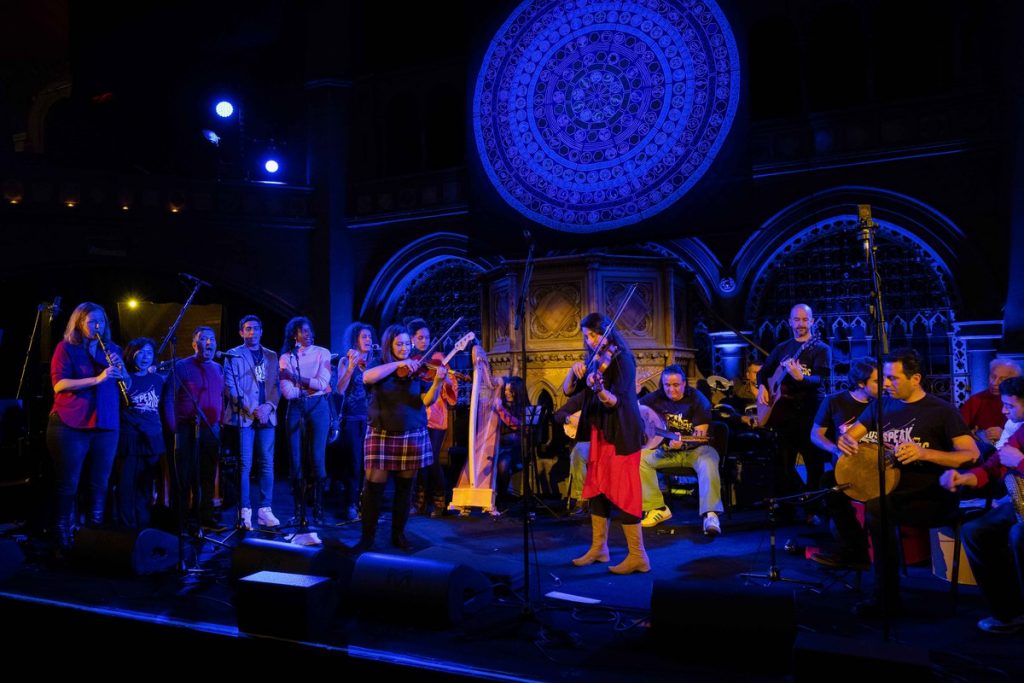 Established in 1951, International Organization for Migration (IOM) is a leading inter-governmental organisation working in the field of migration. For Refugee Week, IOM has partnered with with Together Productions for the fourth year running to create a music video for a song composed by  the I Speak Music Community Orchestra. The aim of the music video is to “unite people from different backgrounds” and “send a powerful message of solidarity to those in refugee camps around the world”.

Members of the public are invited to join the virtual ensemble and can register their interest online by visiting: www.imagineimagine.org

A charity that supports artists across the world and stages theatre productions.

A theatre company working with refugees and those seeking asylum.