The Legal Aid Funding Gap Could ‘Push Millions Into Poverty’. What Can We Do?

“There is no way on heaven and earth that I would have been able to [fight my case] in the state I was, I would have just fallen through,” says Michael, whose wife Pauline tragically passed away from a progressive degenerative condition in July 2017.

After his wife’s death, Michael O’Donnell, 47, who lives in Fermanagh in Northern Ireland, applied for the government’s Bereavement Support Payment, which he was subsequently denied. In the months afterwards, Michael got in touch with his local Law Centre, which has since been helping him to fight his ongoing case to get bereavement benefits. He describes the network’s support as “impeccable”. Without this help, his case would have fallen by the wayside. “I wasn’t actually in the right state of mind to fight it myself,” he says. “I had enough battles going on trying to keep the house going”.

Michael is one of the millions of people in the UK who fall through a so-called “justice gap”. This gap, developed and calculated by Loughborough University’s Professor Donald Hirsch, refers to the difference between the government’s threshold for how little a person must earn to qualify for legal aid and the amount required for them to cover their own legal costs through income without falling into poverty.

In a new report titled Law For All, the Law Centres Network has laid bare the “impossible choice” facing millions of people in Britain today, with some foregoing essentials such as food and heating to fund legal costs. The report comes as the network marks its 50th anniversary, with the first centre set up in North Kensington in July 1970. Law Centres, of which there are 41 across the UK, were established to defend the legal rights of local people, specialising in social welfare law – this includes helping people with housing, their immigration status, or access to benefits. 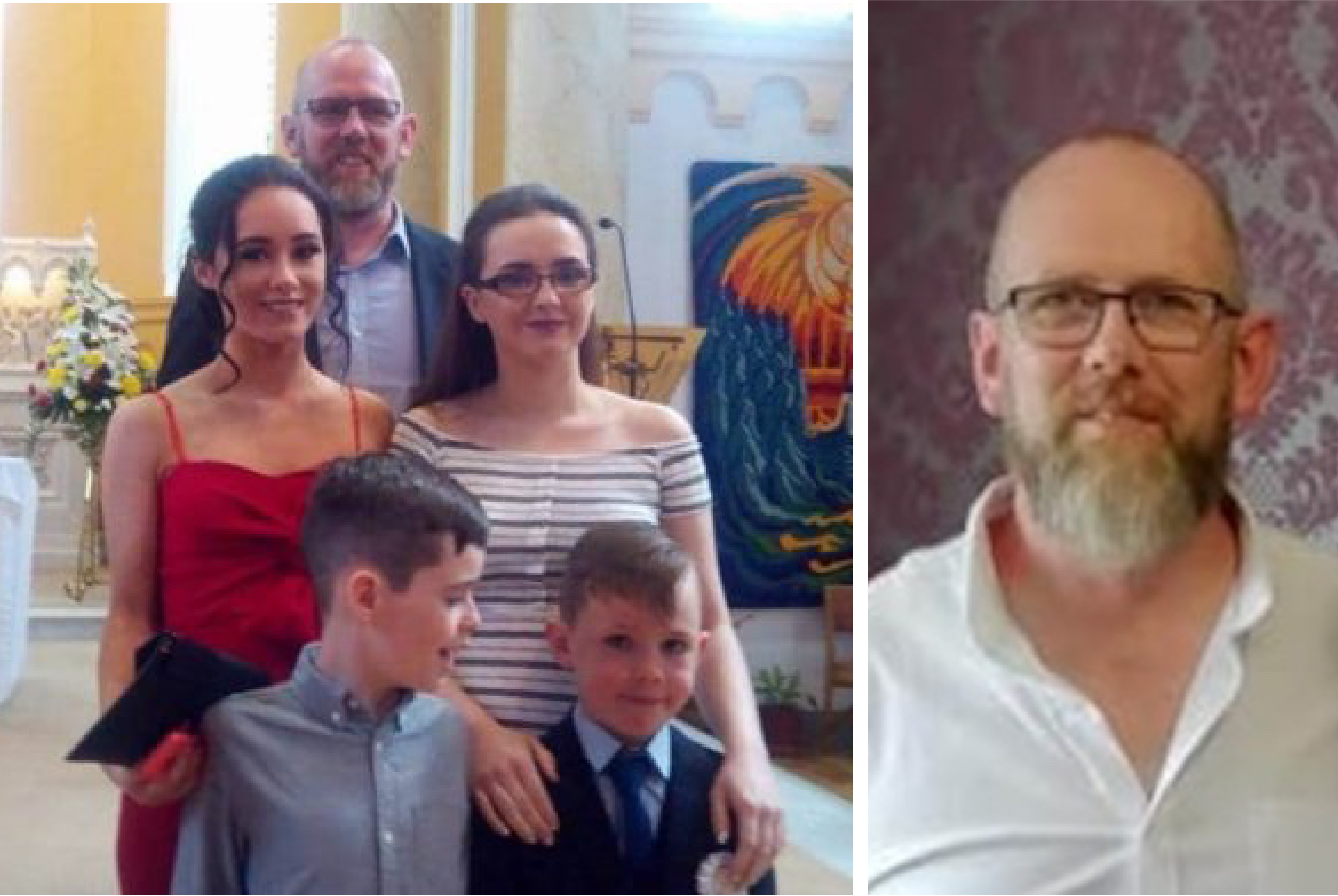 The Law Centre in Northern Ireland is assisting Michael in his case, arguing that the refusal of his benefits could amount to discrimination on the grounds of disability.

Michael was denied bereavement benefits on the grounds that Pauline had not paid the necessary contributions to the state – but Pauline was severely disabled, used a wheelchair and was unable to work, having been diagnosed with the rare genetic disease Friedreich’s Ataxia at the age of 12. Under the Bereavement Support Payment scheme, the deceased partner must have paid National Insurance contributions for at least 25 weeks in one tax year.

The Court of Appeal recently considered, and is set to issue a decision on, whether this refusal was in breach of various parts of the European Convention on Human Rights (ECHR). Article 14 of the ECHR prohibits discrimination on the grounds of disability, among other characteristics. Meanwhile, Article 8 protects our right to respect for private life. The ECHR is enshrined in UK law under the 1998 Human Rights Act.

With four kids to support, the death of Michael’s wife put a huge financial strain on the family. Having been a full-time carer for Pauline since 2001, Michael struggled to find work after she passed away. He describes the whole process of applying for bereavement benefits as something “you don’t want to be doing when you’re trying to mourn, you want to be there for your kids”. In the years since 2017, he has battled to keep the family afloat. He still needs to pay off his wife’s funeral costs and recalls winters where he “wouldn’t have the fuel in the house to keep it warm.”

The Law Centres Network’s report has also revealed that the Covid-19 crisis has worsened matters for millions living in the UK, with centres nationwide seeing a spike in people seeking legal support – from employment discrimination to those at risk of becoming homeless.

Even before the pandemic, in 2019, legal aid funding cuts meant that help could not be provided in half a million cases, according to the network. The report reveals a 90% increase in enquiries at a specialist equality and employment law centre in Liverpool since the start of lockdown until 2 June, while Suffolk’s law centre has seen a five-fold increase in employment and work discrimination between 6 April and 6 June. Meanwhile, Tower Hamlets Law Centre has seen a surge in calls from renters who are “anticipating tension with their landlords” will escalate as the ban on evictions comes to an end on 23 August.

North Kensington Law Centre, set up in July 1970, was the first Law Centre in the UK. Credit: Courtesy of Freuds/Law Centres Network

Legal aid funding: ‘We must build back better’

As the impacts of Covid-19 continue to be felt, the kinds of people who may fall into this “justice gap” are vast and wide-ranging, explains Julie Bishop, director of the Law Centres Network. She says: “Lawyers have a bad reputation, people think ‘oh lawyers’. But in fact, the most common triggers of a legal problem and the need for a lawyer are long-term illness, bereavement, loss of a job, family breakdown – they are things that can happen to anyone, any day.”

The most common triggers of a legal problem and the need for a lawyer are long-term illness, bereavement, loss of a job, family breakdown– they are things that can happen to anyone, any day.

EachOther spoke to two other people who fall into this “justice gap”, both in completely different circumstances to Michael. Luly, 65, came to the UK to escape from violence and economic turmoil in her home country – Venezuela. Ealing Law Centre helped her to secure a visa to stay in the UK in 2018. After her husband tragically died from cancer, Luly says she was threatened with deportation, and with her daughter being taken away from her. Luly contacted Ealing Law Centre, who helped secure Luly and her daughter’s right to remain in Britain indefinitely.

Luly describes the legal help she received from Ealing Law Centre as “so valuable”, adding: “I don’t have words to tell you how professional they are.”

Gary, a pub manager in Bristol, is fully aware that he may need support from his local law centre in the future. Although he hasn’t needed help yet, Gary is concerned about the precarious nature of running a business in the hospitality industry during Covid-19.

“In terms of access to legal support, I don’t think I have any currently, or it would be difficult for me to get legal support if I found myself in a situation where I needed legal support,” he explains. “The whole industry is on the edge, not just ours – a lot of industries are on the edge at the moment with what’s going on.”

The Law Centres Network has launched a new fund – the Justice Fund – in a bid to secure the futures of Law Centres across the country. The network is hoping to raise a £500,000 cash reserve which can be accessed by its centres to help those in need, including people not covered by legal aid. Many law centres are currently in a precarious financial position, with 42% of them recording a deficit in the year ending 2019. On average 26% of all law centre income is from legal aid, but there are fears that this revenue stream could be slashed further – the Ministry of Justice has seen cuts to its overall budget of 25% since 2010, the most severe of any government department.

“Our data shows a funding sinkhole: many working families are not covered by legal aid and do not know it,” says Bishop. “If they are personally affected by the pandemic’s economic impact, they are unlikely to afford legal fees for protecting their home and loved ones.”

She adds: “As the country begins recovering from the pandemic, we must ‘build back better’ and create long-term sustainable funding that can meet the changing needs of the communities we serve.”

A Ministry of Justice spokesperson said: “We’ve allocated millions in extra funding for law centres and legal advice charities to support those most in need during the pandemic, including victims of domestic abuse.

“We are separately carrying out a review of the legal aid means tests which will report in Spring 2021.”

Michael hopes winning his years-long case may help others in a similar position to him in the future. “It always seems to be on my mind at night, whether it’s ever going to finish,” he says. “Even if it didn’t benefit me, whether it would eventually benefit someone else in the near future or in a situation like me.”

The national network of Law Centres, which defend the rights of people who can't afford a lawyer.

Make law for all

The Law Centres Network has set up a justice fund to help its centres provide vital legal advice.