Why The Human Rights Act Matters To Journalists

The Justice Secretary, Dominic Raab, recently took to the Mail Online to justify his plans to introduce a Bill of Rights replacing the Human Rights Act (HRA), the UK law that obliges the government to ensure our rights as citizens are upheld.

Mr Raab is on record as saying that he has three priorities for reforming the Human Rights Act. He wants to:

Let me start with the easy ones.

There’s nothing to stop the government making human rights law subject to democratic oversight. The European Convention on Human Rights, which the Human Rights Act introduces into UK law, contains a number of caveats to various rights to allow for exactly that.

Article 5, the right to liberty and security, for instance, is limited by “procedure prescribed by law” including jailing by a competent court and lawful arrest. Article 10, the right to free expression, is curtailed by “such formalities, conditions, restrictions or penalties are as prescribed by law and are necessary in a democratic society.” These include broadcast licences, the interests of national security, public safety, prevention of crime, protection of health or morals and protections of the rights of others.

Few human rights are absolute, they are limited by other rights or democratically decided law introduced in the interests of all citizens.

The abuses that Raab talks about so glibly are few and detailed examination of them all easily explain (errors apart) why the courts took the decision they did. The usual explanation is that courts were rightly concerned not to send those accused of crimes to places where the accused would receive significantly worse treatment than they would in this country both in terms of fair trial and any potential subsequent punishment.

Strengthening the right to free speech

Mr Raab’s main concerns about human rights, as identified in the Mail Online, seem to surround freedom of expression. He told the the Mail,

“I feel very strongly that the parameters of free speech and democratic debate are being whittled away, whether by the privacy issue or whether it’s wokery and political correctness.”

He went on to say that he sought to reverse the “corrosion of long held freedoms by cancel culture, political correctness and creeping moves towards European-style privacy”.

Raab does not define his terms so we are all left at a loss to know what he means. Wokery, political correctness and cancel culture are all terms that are well-known right-wing dog whistles designed to gaslight the issues, mislead the public and muddy the water of proper debate.

Whilst his view on what he means by European-style privacy must be left to his imagination, the definition of being woke is to be alert to injustice and discrimination in society, especially racism. Political correctness is a similar term that can be defined as the avoidance of forms of expression or action that are perceived to exclude, marginalize, or insult groups of people who are socially disadvantaged or discriminated against. Cancel culture is defined as a social environment in which publicly boycotting or withdrawing support for people, organizations, etc. regarded as promoting socially unacceptable beliefs is widespread practice.

Our law is largely founded on the concepts of justice and equality. I’ve been alert to injustice and discrimination and have attempted to minimize both, when I find them, my whole life. I think most Britons are the same. I certainly find it difficult to believe that my attempts to do that are somehow stopping the freedom of expression of others.

That does lead us on to cancel culture. I’m certainly happy to withdraw support from organisations that don’t meet with my approval. It’s my right to do so, surely. If my local shop fails to stock my favourite brands, I go elsewhere. If my local pub is full of racists, I drink elsewhere. If the local club or society supports things of which I disapprove, I won’t join. If my university insists on inviting a speaker with whom I strongly disagree, I might go simply to heckle, challenge and ask questions. Of course, it is the right, under freedom of expression, for people to say all sorts of things that offend others, but they really should be prepared to accept the consequences.

The right to only say nice things is no right at all, but the right to offend gives others the right to respond. That may involve boycotting their meetings, withdrawing support from their organisation or challenging them at public meetings. I think it’s a far greater danger for controversial speakers to hold private meetings to ensure there is no challenge to their ideas than to speak to a public meeting to face questions, comments and challenges (provided, of course, that does not progress to violence).

Suggesting that wokery, political correctness or cancel culture are good reasons to be concerned only suggests that you don’t understand what freedom of expression means. Raab does not explain how freedom of expression will become a trump card, but one can’t help feeling that what he really means is that we should ban any attempt to attack the Daily Mail/Telegraph’s cosy view of UK life as being one as lived by a white middle-class man brought up through the sixties on a diet of empire, war comics, World Cup football victories and a highly selective, fantasy history under the ‘benign’ protection of the statues of empire -builders, slave traders and politicians. That is hardly protecting freedom of expression, especially if we are unable to protest those who push a view of life with which we disagree, because that would amount to cancel culture.

The Raab interview and his comments on privacy and freedom of expression came at the perfect time for the Mail, of course, whose owners, Associated Newspapers, were still smarting over their Appeal Court loss in the Meghan Markle letter case.

The Duchess of Sussex had sued the paper for breach of privacy and copyright after they published a personal letter she had written to he father. The High Court and then the Appeal Court both rejected Associated’s call for a full trial of the case that would have allowed the newspapers to publish stories about the unfolding court events saying that the letter’s contents were “personal, private and not legitimate matters of public interest.”

It’s difficult to imagine not even being able to write a personal letter to your father, with whom you are having a difficult relationship, without having to worry that the letter might be published to every gossip-hungry idler the world over. As a professional writer, I also get very exercised at the idea that they chose to publish someone’s work without checking where to send the cheques!

Even Raab, with his well-known ability to be unaware of things most of us take for granted, understood that Associated Newspapers and several other newspapers, especially those on the right, rely heavily on invasions of privacy in order to boost circulations.

We’re not talking intrusions that are firmly in the public interest here, those that expose wrong-doing, corruption, criminality or incompetence. Exposure of confidential documents, correspondence, private meetings and so on can often be justified as “legitimate public interest” as the Appeal Court identified in the Duchess of Sussex case. But the invasions of peoples’, usually celebrities, private personal lives that is meat and drink to tabloids is rarely in the public interest but often of interest to the public. Of course, many celebrities happily sacrifice their personal life in order to support their celebrity lifestyle, but too often papers use this easy access as justification to invade the privacy of others, against their will.

It seems Raab is seeking to lower the threshold of privacy protection as a right (and indeed other rights) under the guise of protecting freedom of expression. This would, in reality, protect newspapers seeking to make money by printing stories that the public are commonly viewed to want to read rather than the more difficult and expensive investigations carried out in the public interest.

It would also lead to other dangers; the Human Rights Act currently protects us from an over officious state by guaranteeing our privacy unless a court warrant is sought and agreed. Writing a “trump card” for a freedom of expression we already have would weaken our right to privacy from the state. It would be wrong to allow it simply so government-friendly media barons can boost profits by invading the lives of whoever they wish. It would be a move that had nothing to do with rights and everything to do with commerce and profit which this government has consistently shown to be their only concern. 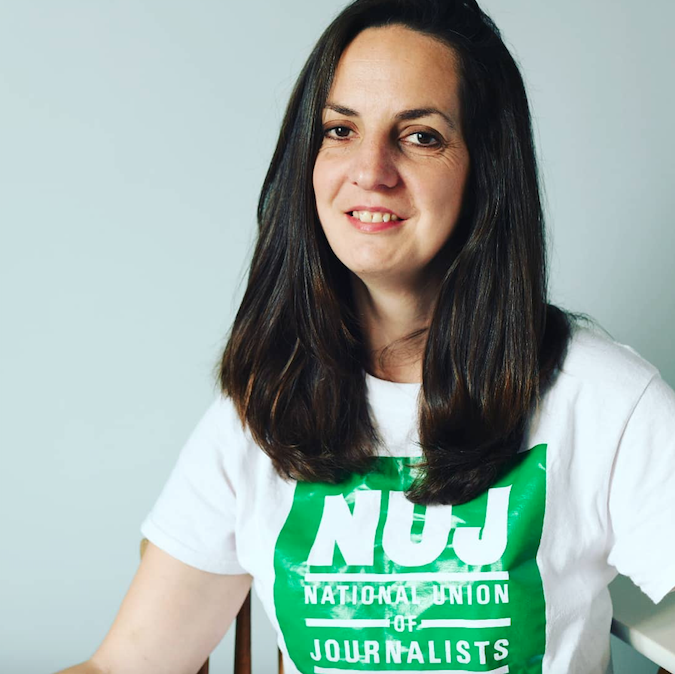 Natasha Hirst Vice-President of the National Union of Journalists

Natasha Hirst is Vice-President of the National Union of Journalists. She has been freelance since 2010, specialising in political and campaigns photography. She has remained a committed trade union and disability activist with a wide range of political and community interests, including serving on the Heritage Lottery Fund Committee for Wales and as a director for Disability Wales. Natasha is the current chair of Disability Arts Cymru.

Natasha Hirst is Vice-President of the National Union of Journalists. She has been freelance since 2010, specialising in political and campaigns photography. She has remained a committed trade union and disability activist with a wide range of political and community interests, including serving on the Heritage Lottery Fund Committee for Wales and as a director for Disability Wales. Natasha is the current chair of Disability Arts Cymru.

Chris Frost is emeritus professor of Journalism at Liverpool John Moores University where he was head of department for many years. He has been a journalist, editor and journalism educator for more than 45 years working mainly in newspapers before his move into the academy. He is the author of “Privacy and the News Media” and “Journalism Ethics and Regulation” available from bookshops and online.

Chris Frost is emeritus professor of Journalism at Liverpool John Moores University where he was head of department for many years. He has been a journalist, editor and journalism educator for more than 45 years working mainly in newspapers before his move into the academy. He is the author of “Privacy and the News Media” and “Journalism Ethics and Regulation” available from bookshops and online.