The Government’s Proposed Bill Of Rights Is A ‘Power Grab’

On the same day Prince Charles declared in the Queen’s Speech that the government intends to replace the Human Rights Act (HRA) with a new Bill of Rights, civil liberties activists rallied behind a campaign in what may be a last attempt to protect it.

Yesterday, the Prince of Wales stood in for the Queen at the state opening of Parliament, reading out the government’s proposed legislation for the new parliamentary session. According to Buckingham Palace, the Queen was absent from proceedings for the first time since 1963, due to “mobility issues”.

Prince Charles announced that, in the coming months, the government will introduce 38 Bills in Parliament. Those Bills include draft legislation which will address: climate change, conversion therapy, protest rights and “levelling up”, to be debated in the House of Commons in coming weeks.

Credit: This footage was originally sourced from Parliament Live.

Of the 38 Bills listed, some of the most anticipated in terms of their implications for human rights include:

In his speech, Prince Charles stated that in the next year the government would introduce a Bill of Rights. The announcement came after the government consulted the public, advocacy groups and human rights experts on its plans to scrap the Human Rights Act. The consultation itself was heavily criticised at the time for being inaccessible to many.

Prince Charles stated: “Her Majesty’s Government will ensure the constitution is defended. Her Majesty’s Ministers will restore the balance of power between the legislature and the courts by introducing a Bill of Rights.”

The Human Rights Act will not be taken without a fight

In reaction to these developments at the state opening of parliament, charity Liberty sent a van around Westminster and Dominic Raab’s parliamentary constituency of Esher & Walton carrying a public service announcement which warned of a human rights ‘power grab’.

So far, over 45,000 people have signed Liberty’s petition to defend the Human Rights Act. Martha Spurrier, Director of Liberty, stated:

“Ministers have made no secret of their desire to tear up the Human Rights Act, but now we know for sure that it will be put into motion in the coming weeks and months. Our fundamental rights and freedoms are under threat in the UK like never before”.

“But the Human Rights Act won’t be taken from us without a fight, and if enough of us take a stand, we can save it.”

Why our Human Rights Act is vital

The Human Rights Act is the landmark legislation that prevents UK citizens from having their rights trampled by the state. The HRA is intrinsic to protecting and advocating for our rights:

Without the Human Rights Act Hillsborough families wouldn't have got justice, survivors of sexual assault by Worboys wouldn't have held police to account, disabled people wouldn't have been able to challenge unlawful 'do not resuscitate' notices during Covid

The Runnymede Trust have called the situation a “rights crisis” for Black and ethnic minority groups. The Trust explained how a Bill of Rights would move to create classes of claimants, which would make room for unprecedented discrimination. The Runnymede Trust stated:

“The proposed Bill of Rights will introduce a so-called ‘responsibilities framework’ which would in essence create “different classes” of claimants on the basis of their past behaviour.  This proposal would shift the court’s focus from the human rights violations committed by a public authority to examining the life of the person who has experienced those violations.”

The Trust have also explained that, like many other minority groups that will be disproportionately affected by a Bill of Rights, the creation of ‘classes’ will affect Black communities who already experience discrimination in the justice system:

“It’s particularly threatening for Black and ethnic minority communities who already experience deeply disproportionate outcomes in the criminal justice system – and are set to suffer most from the introduction of such a framework.” 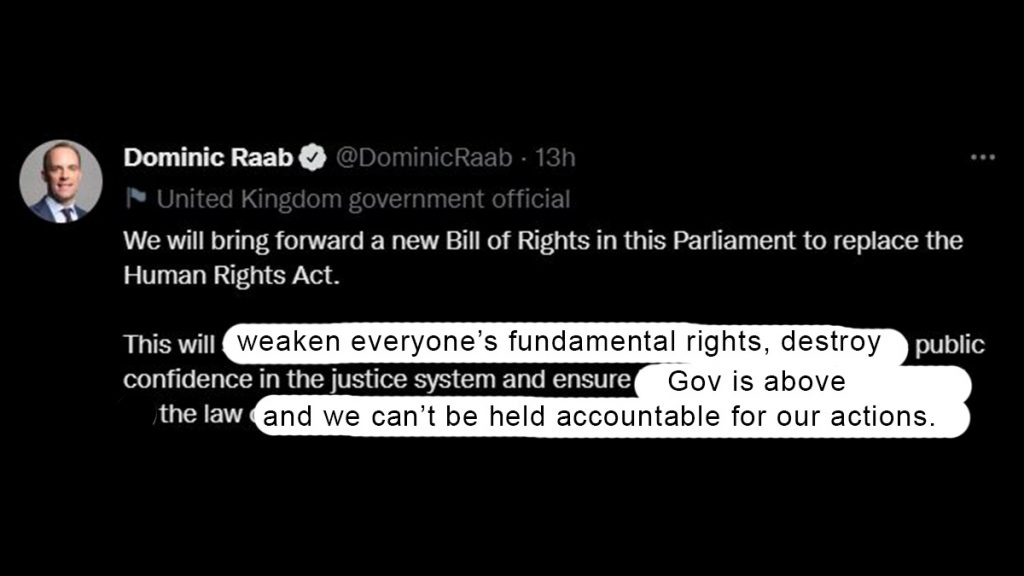 Credit: Liberty recently took to twitter to publish an edited tweet from Deputy Prime Minister, Dominic Raab, who has reportedly wanted to dismantle the HRA for ‘over 12 years‘.

It’s not over yet…

After Parliament passed the fiercely criticised Nationality and Borders Bill, charity Freedom From Torture won a court case against the government over its plans to ‘push back’ refugee boats in The Channel. The Nationality and Borders Act will soon become UK law. Now, Freedom from Torture has launched a second round of legal proceedings. The non-governmental organisation (NGO) is taking preliminary legal action against the Home Office for its plans to send refugees to Rwanda as part of the ‘Migration and Economic Development Partnership’ that was announced last month:

It's clear that the #Rwanda plan is cruel & unlawful. We've brought legal action against it with @pcs_union & @Care4Calais. Many Home Office staff are appalled by it. Human rights bodies & the UNHCR condemn it & now the Government's own immigration lead demands greater scrutiny. https://t.co/I7358TIwer

Campaigners and NGOs have proved throughout the pandemic that they are here to hold public authorities to account and a community of like-minded people are reaching across tables to change minds and advocate for everyone’s rights.

The End Violence Against Women Coalition are doing just that as they critiqued the potential Bills announced yesterday, stating that the majority of them will undermine the fight to end violence against women.

This includes legislation to give more power to the police to shut down protest. Recently, Reclaim These Streets won a Hight Court case against the Metropolitan Police who tried to stop a peaceful, socially distanced vigil in memory of Sarah Everard. This breached their Right to Assemble, which is currently protected under the HRA.

The End Violence Against Women Coalition spoke out in favour of a Draft Victims’ Bill and an Online Safety Bill to protect women in the future:

“We need a Victims’ Bill to deliver in a number of other ways, including on independent legal advice for rape survivors; safeguards to protect rape victims from excessive police requests for third-party materials; and addressing inequalities in access to support and outcomes for marginalised groups, including Black and minoritised, migrant women, Deaf and disabled and LGBT+ survivors.”

The Human Rights Act was passed by the UK Parliament in 1998 and took effect in 2000. It incorporates into domestic law the European Convention on Human Rights, which, in turn, draws on the Universal Declaration of Human Rights composed after World War 2 and the Holocaust.

Some critics have argued that the HRA does little to protect historic constitutional rights and liberties, such as the right to a trial by jury or free speech. However, the Human Rights Act is a lifeline for ordinary people to seek justice and to hold authorities to account.

While it is not entirely clear what will be included in a new Bill of Rights, the legislation is likely to emphasise a separation between UK and EU law.

“Our proposals, which form the basis of this consultation, reflect the government’s enduring commitment to liberty under the rule of law. The government remains committed to the European Convention on Human Rights – and, indeed, the UK’s tradition of human rights leadership abroad, as demonstrated by the introduction of our Magnitsky global human rights sanctions regime… We intend to revise and reform the flaws we have identified, and replace the Human Rights Act with a modern Bill of Rights, one which reinforces our freedoms under the rule of law, but also provides a clearer demarcation of the separation of powers between the courts and Parliament.”

Visit EachOther’s spotlight on the Human Rights Act to see just how much is now at stake.