Which Of Child Q’s Rights Might Police Or Teachers Have Violated?

TRIGGER WARNING: Please note this piece contains references to invasion of privacy and degrading treatment which some readers may find triggering.

A 15-year-old Black schoolgirl, now known as Child Q, was removed by school staff from an exam she was sitting and then strip-searched by two police officers on suspicion of possessing marijuana. No other adults were present during the strip-search. Despite the female police officers being aware that Child Q was on her period, they proceeded with an intimate search. No drugs were found. Two years on, Child Q and her family are fighting for justice. We ask which of Child Q’s human rights might have been breached in this traumatic series of events.

Child Q has launched civil proceedings against the Metropolitan Police and the relevant school. She seeks to hold both institutions to account, including through cast-iron commitments to ensure this never happens again to any other child.

By taking Child Q out of an exam on suspicion of carrying marijuana, the adults in question prevented her from being able to complete that exam, potentially infringing her right to education. Her right to a private and family life may also have been breached, as no guardian was present during her ordeal.

The traumatising search may have breached Child Q’s right to be free from inhuman or degrading treatment, her right to personal safety and freedom from unreasonable detention, as well as her right not to be discriminated against under the HRA. It may also have flouted her right under article 3 of the UN Convention on the Rights of the Child to have her best interests be held as a primary consideration in the authorities’ decision-making. 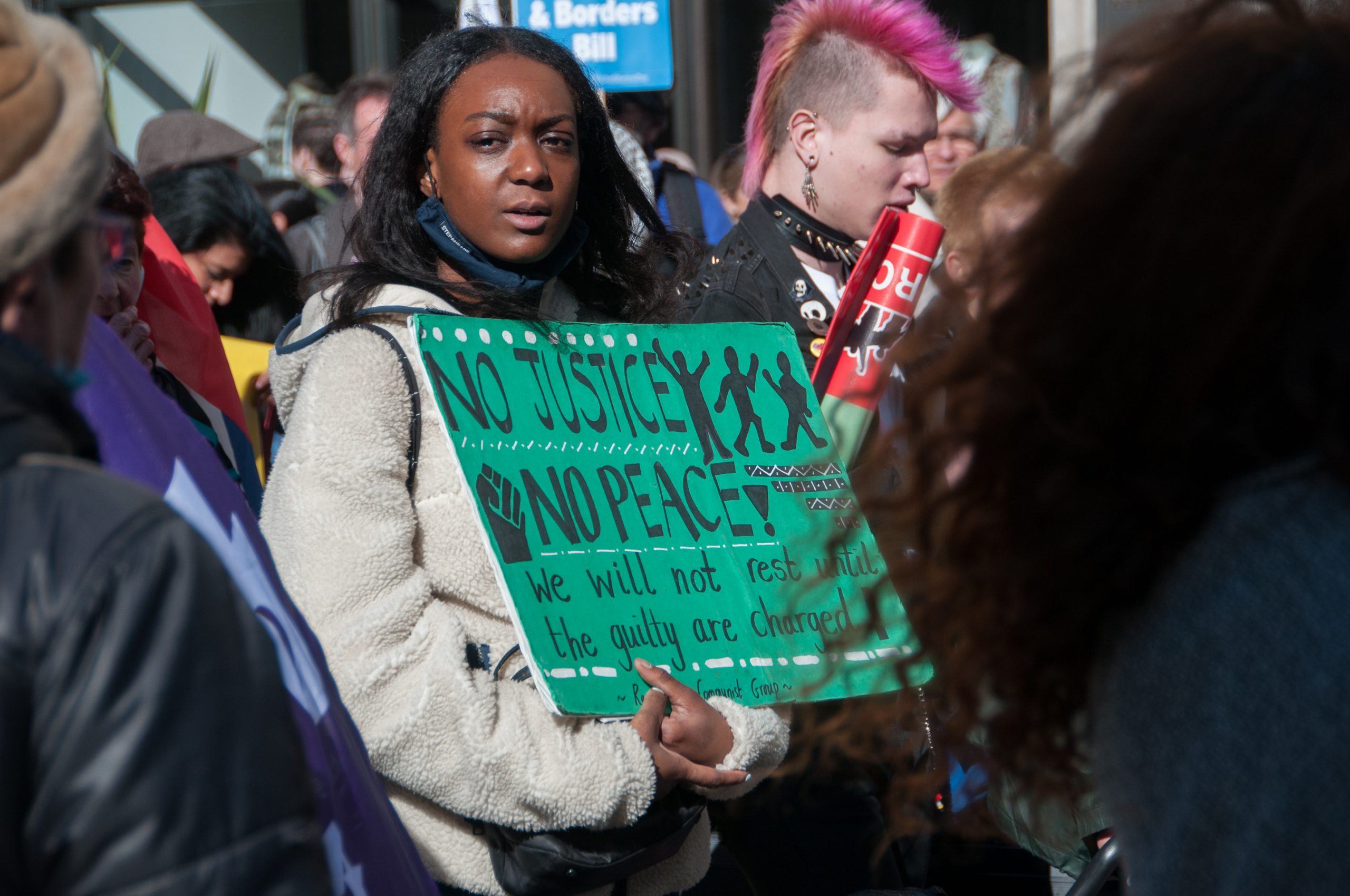 Dolcy highlighted that the Met Police has a track-record of systemic failures, breaching the rights of members of the public:

Dolcy stated that Child Q’s family want justice now so that this does not happen to a child in the future, calling on The Met to rid itself of ‘disease’:

The family expect the new Commissioner to include affected communities in designing a plan to rid the force of these diseases and to effect that plan as a priority. 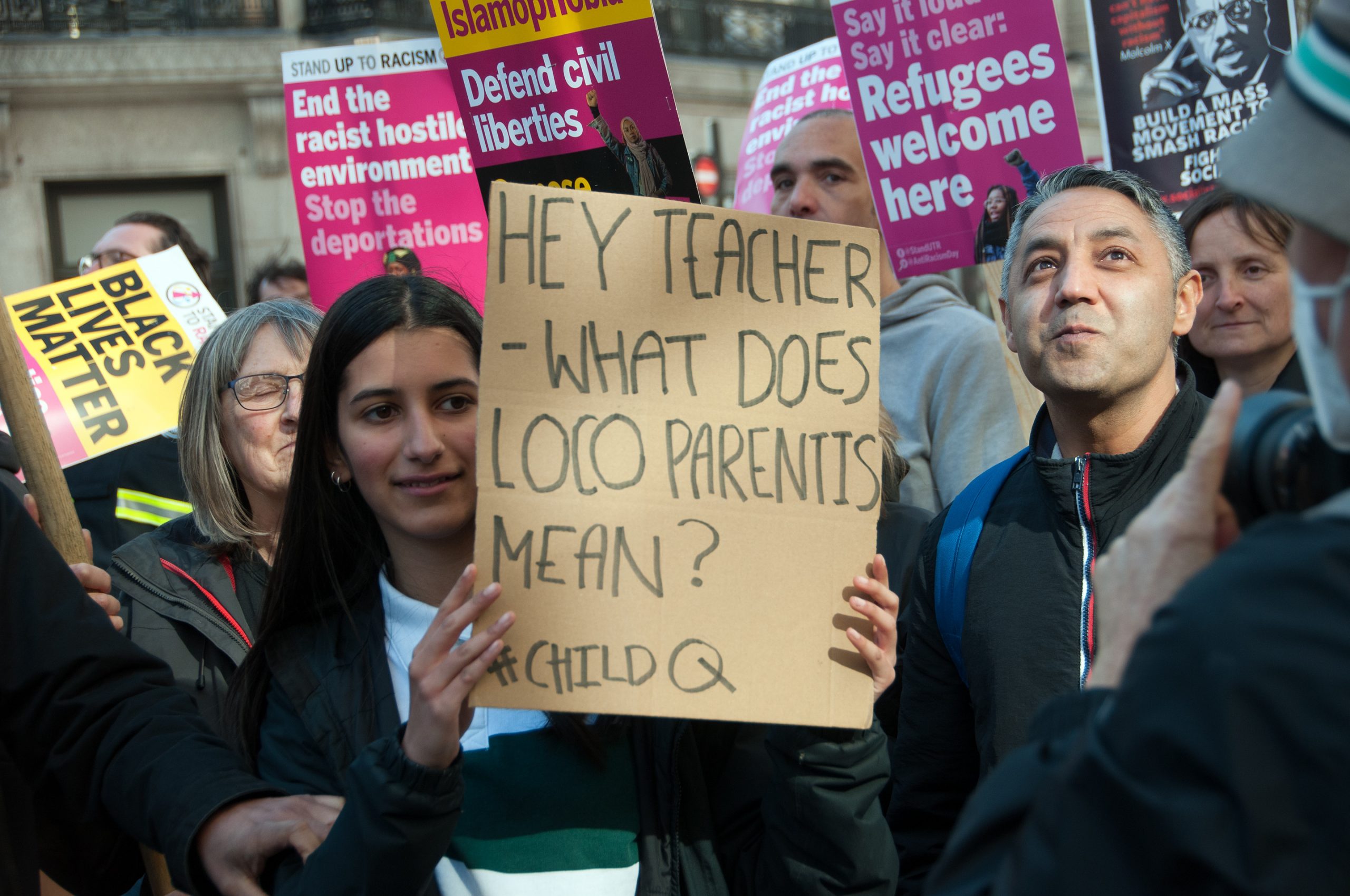 In an attempt to protect Child Q’s right to privacy under article 8 of the HRA, Child Q and her family have taken a decision not to give interviews to the press and have urged others to preserve her privacy.  The family has requested that there be no speculation as to their identities or the identity of Child Q’s school, which could, in turn, result in Child Q’s identity becoming known.

The charity Just For Kids Law, which is representing Child Q, released a statement in which Child Q thanks the public for their support. She states that she does not feel alone:

I want to thank the thousands of people across the world of all backgrounds who have offered me support – both publicly and through messages conveyed to my legal team – following everything I’ve been through. I know I am not alone.

Child Q’s family have described her as having changed from a “happy-go-lucky girl to a timid recluse that hardly speaks”, who, following the incident, has self-harmed. 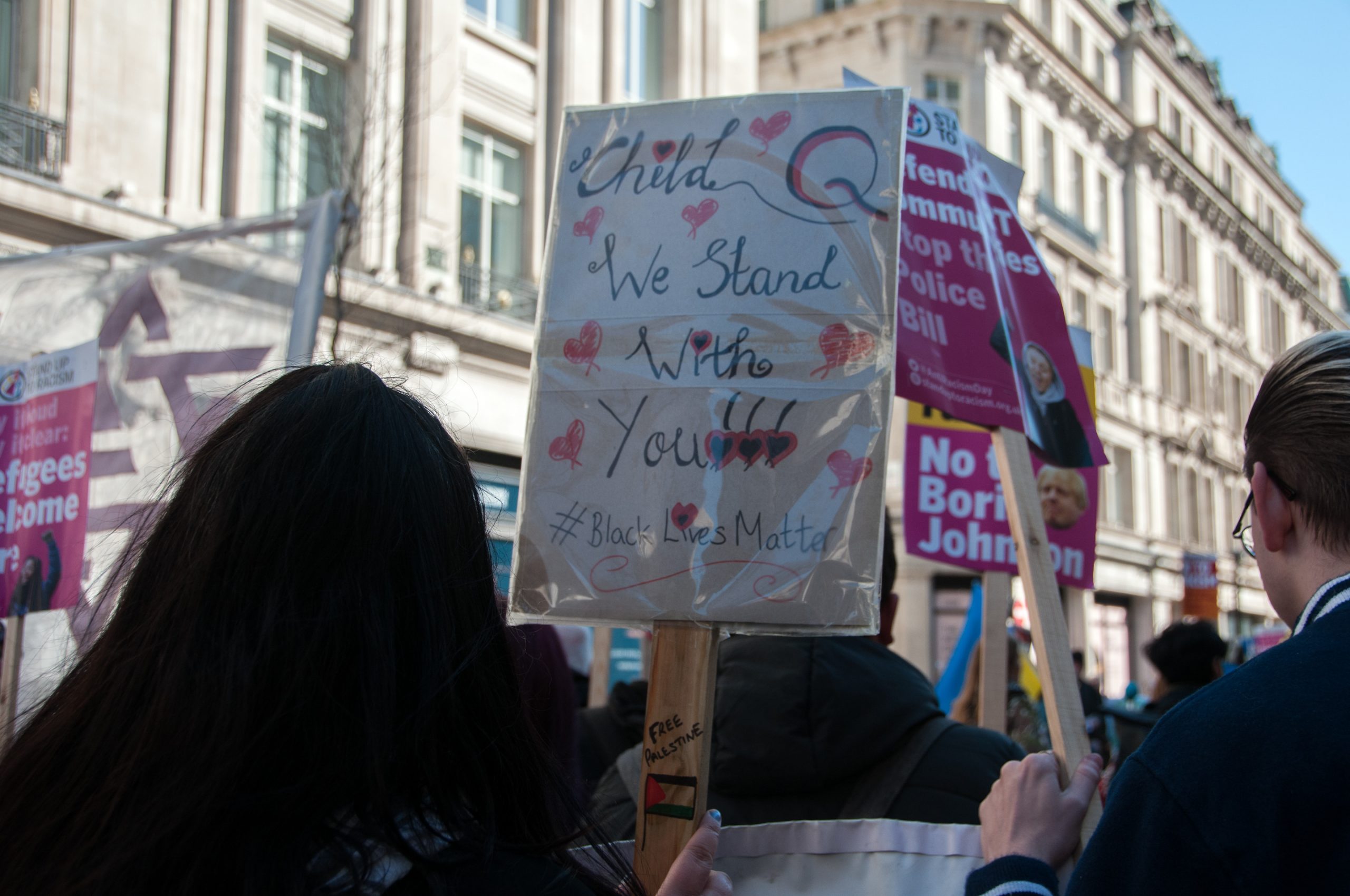 Roxy Legane, director of Kids of Colour and a member of the No Police In Schools campaign, stated in an interview:

“The racist, gendered violence inflicted on Child Q, and many other children policed in their schools, would not be possible without the eradication of Black children’s ‘child status'”.

“As a society, we generally label children “innocent”. So, to harm children, the public must deem it acceptable, which requires a removal of that innocence. That lens is replaced with the age-old stereotypes: threat, suspect, aggressor, promiscuous, excessively strong.”

‘Figures Tell You This Is About Race’

A multi-agency safeguarding report concluded that the search, which did not find any drugs, was unjustified and that racism was ‘likely’ to have been a factor.

In an interview with the BBC, Diane Abbott, Labour MP for Hackney North and Stoke Newington, said that racism ‘absolutely played a part’ in Child Q’s treatment.

Listen to the full interview here:https://t.co/ll9NHxP3S8

Abbott highlighted racial disproportionality when it comes to the ethnicities of children searched by the police: “Only two of 25 under-18 searches were white: the figures tell you this is about race.”

Many have called for the headteacher of the school in question to resign in order to safeguard students in the future. The Mayor of Hackney, Phil Glanville, said:

“[We] ask that the headteacher should stand down and allow that school and its community the new start it needs to heal from this traumatic experience and, by doing so, also fully recognise the traumatic impact on Child Q and her family.”

The Power Of Assembly

Feminist group Sisters Uncut have arranged or supported several peaceful protests to hold the Met Police accountable for recent incidents, including the tragic murder of Sarah Everard and now the degradation of Child Q.

"Sisters Uncut turn it up and bring the noise" – a report on Saturday's @SistersUncut protest against police violence. Is this the sort of noisy protest the government intends to outlaw? https://t.co/XRJ5cNFQiH pic.twitter.com/yjosHbj0KW

The group recently set off 1,000 rape alarms in front of Charing Cross police station, calling out The Met for a string of incidents relating to sexual violence. The demo was held shortly after an Independent Office for Police Conduct (IOPC) report, released in February, investigated various allegations against officers at Charing Cross police station, including a police officer assaulting his partner, officers having sex while on duty, and racist and sexist WhatsApp messages sent by officers. One officer’s messages read, ‘I would happily rape you’, and, ‘If I was single, I would happily chloroform you.’

We just set off 1000 rape alarms on the steps of the infamous Charing Cross Police Station. 🚨🚨🚨🚨 #BecomeUngovernablehttps://t.co/8UknQHSvcm pic.twitter.com/agLGOZg0Ag

The Met’s actions in the case of Child Q are now being investigated by the IOPC. The investigation comes in the wake of activist group Reclaim These Streets winning in the high court against The Met Police for banning their planned vigil following the murder of Sarah Everard by then serving police officer, Wayne Couzens.

“Two judges ruled that the Met Police breached the rights of the organisers of the planned vigil for Sarah Everard, who did not attend the vigil itself”.

“We maintain that police violence against women is not new. At least 15 women have been killed by police officers since 2009. As reported in The Guardian, according to the Centre for Women’s Justice, one woman a week comes forward to report a serving police officer for domestic or sexual violence.”

The group has since launched a campaign called ‘We Withdraw Consent’, which calls for the public to “withdraw consent from policing”, invoking the tradition of ‘policing by consent’ in the UK. 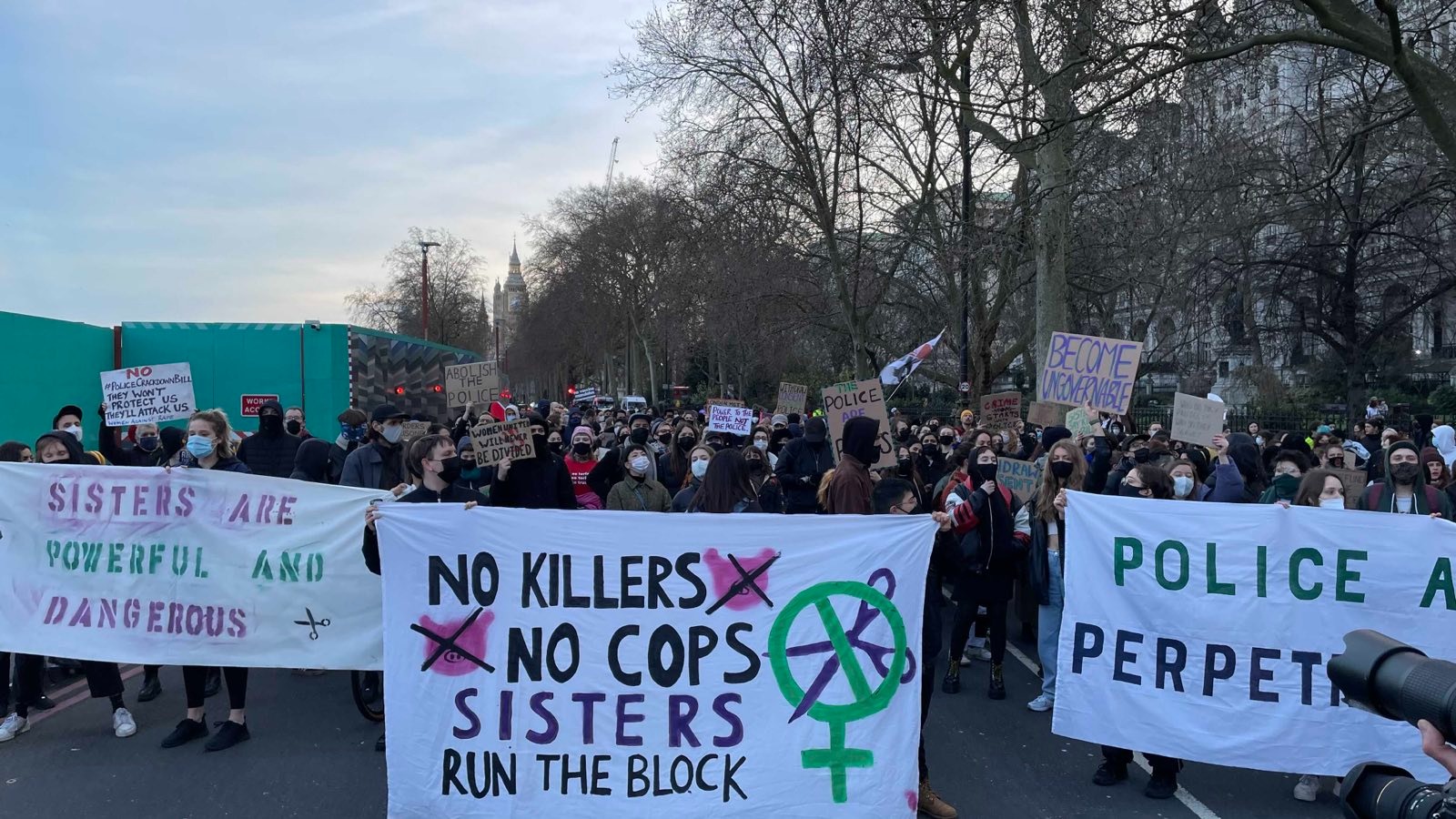 The Future Of Defending Rights

The HRA is currently facing an overhaul by the government, who are moving to replace it with a bill of rights. Human rights experts, security services and civil liberties groups have issued warnings that the move will weaken people’s rights.

The Met Police has confirmed that the IOPC is now investigating the Child Q case. Dan Rutland, detective superintendent in The Met’s Central East Command, stated:

“We recognise that the findings of the safeguarding review reflect this incident should never have happened”.

“It is truly regrettable and, on behalf of the Met Police, I would like to apologise to the child concerned, her family and the wider community.”

Since this apology was issued, The Met has confirmed that the officers who conducted the search of Child Q have been taken off the front-line:

#ChildQ: The officers who conducted the strip-search have been removed from front line duties, the Met Police has just said. But still employed to be clear.

Netpol have warned that, should the Police, Crime, Sentencing and Courts (PCSC) Bill become an Act, the women at the event outside Charing Cross police station could have been arrested:

Police officers stood by as the alarms blared, but once the new Police, Crime, Sentencing and Courts (PCSC) Bill becomes an Act, this kind of noisy action could result in limits on rights to protest and mass arrest for everyone refusing to comply with police restrictions.

Child Q’s ordeal adds to a growing catalogue of recent police failures when it comes to violence perpetrated against women and girls.