The Frontline Doctors Challenging The Government’s Handling Of Covid-19

“We will do everything we can to make the world a better place for you,” said Meenal Viz, an almost seven-month pregnant hospital doctor.

Her promise, shared on Instagram, was directed towards her unborn child. The 27-year-old had until recently been working in a hospital, exposed to Covid-19 patients, before moving into an office-based role amid the pandemic. Her husband, Dr Nishant Joshi, who was among the first doctors to speak out over PPE shortages, continues to work in a Luton hospital’s A&E ward.

On Thursday (23 April), the couple launched a legal challenge against the government’s guidance on personal protective equipment (PPE), which they argue exposes them to coronavirus infections.

“A big part of my fight is that I am going to be bringing a child into this world,” Viz told EachOther. “If we’re living in a world where doctors are being silenced, that seems to me to be an environment of oppression.”

Viz and Joshi are not alone in taking legal action over the government’s handling of the Covid-19 pandemic.

Dr Moosa Qureshi on Sunday launched legal proceedings against the government over its refusal to disclose the findings of a 2016 simulation exercise into the NHS’s preparedness for a flu pandemic, which revealed serious failings.

“The question is why better preparations were not made when we had an exercise three years ago which told us we had serious problems,” he told EuroNews.

“And why we’re not even being told, even as many of our colleagues are dying on the frontline, what was in that report.

“I actually think that’s profoundly disrespectful to the medical and the nursing profession and to the healthcare workers that have died.”

Here, EachOther takes a closer looks what these doctors are fighting for. 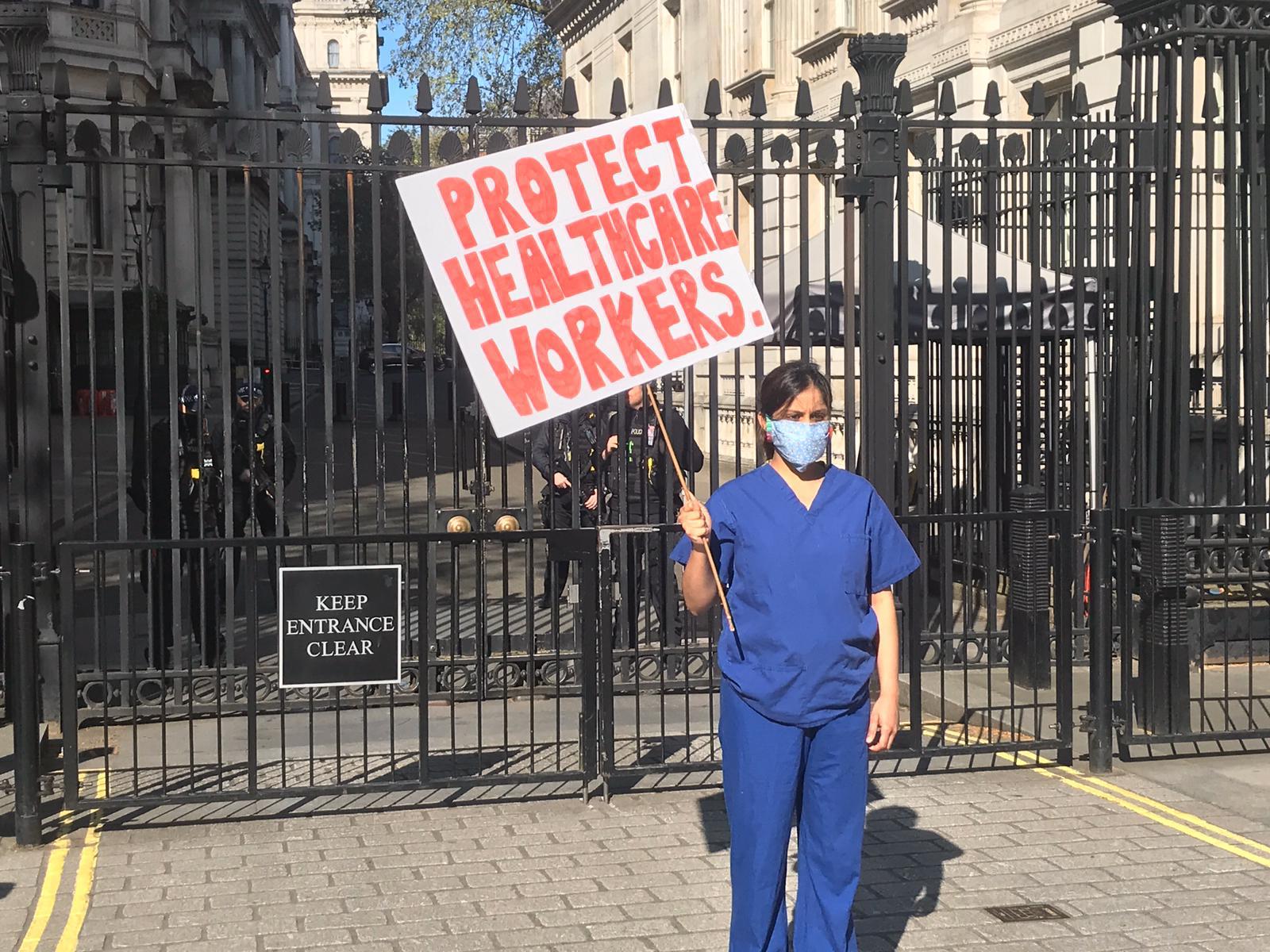 Viz and Joshi hope they do not have to take the government to court – but that rather pressure it into quickly bringing its PPE guidelines in line with international standards.

The pair, who are British Asian, argue the guidance fails to address greater risks faced by black and minority ethnicity (BAME) health workers. The first 10 doctors in the UK named as having died from the virus were all BAME. Official figures revealed by health secretary Matt Hancock during Monday’s Downing Street press briefing put the death toll among NHS staff at 82.

They also argue the guidance falls short of the standards set out by the World Health Organisation; is leading to inconsistent practices across NHS Trusts and does not make it clear that healthcare workers have a right to refuse to work without adequate PPE.

“The WHO has recommended not to reuse masks because it is not safe, but our guidelines have been changed to say we can reuse masks,” Viz told EachOther. “The WHO has said that, with Covid patients, you need full protective gear … but [the government] is saying you can wear a plastic apron and a surgical mask. That is absurd.”

On 17 April, the government changed its guidance to allow medics to wear flimsy plastic aprons with coveralls when full-length gowns ran out. It did this by changing what counts as an “aerosol generating procedure” (AGP) – those which carry the highest likelihood of virus transmission and for which the greatest level of PPE is required – to exclude chest compressions.

“Every time a healthcare worker becomes hospitalised with Covid-19, it exacts an extraordinary toll on our friends, family and colleagues,” the couple said in a statement.

They spoke of the mental toll exacted on healthcare workers who have to sedate and ventilate their own colleagues.

“The government owes an apology to these bereaved families, many of whom were unable to be with their loved ones in their dying moments.” 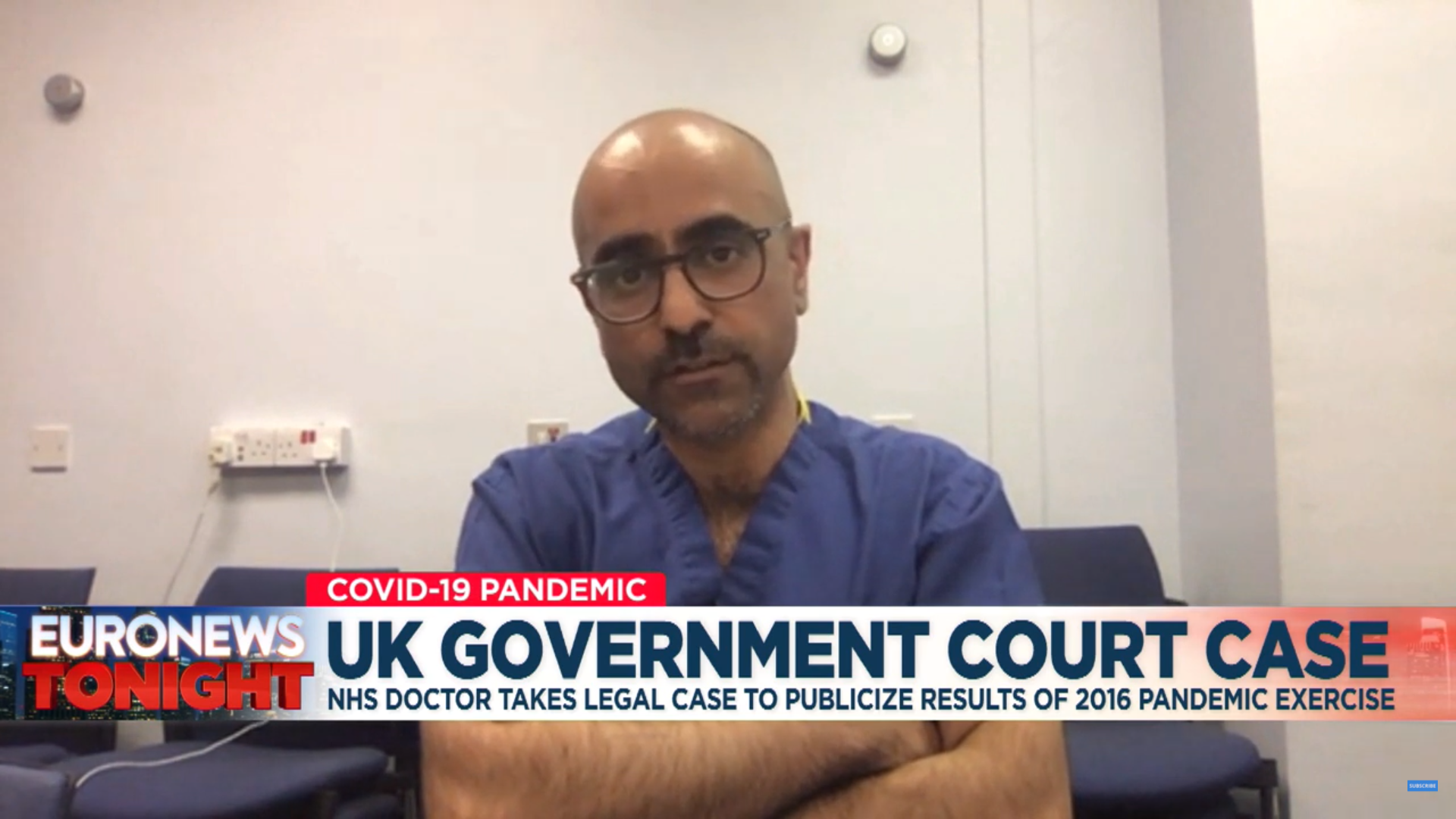 Dr Moosa Qureshi, who is part of the campaign group 54,000 Doctors, specialises in blood disorders and works with leukaemia patients – who fare particularly badly when infected with Covid-19.

He is calling for the government to publish the findings of a 2016 report produced following Exercise Cygnus, a 2016 simulation exercise involving the NHS, all major government departments and local authorities, which was designed to test their ability to cope with a pandemic.

The Telegraph reported last month that it found the NHS had failed the test but the report findings were kept secret.

A request to obtain the document under Freedom of Information laws has been refused on grounds that “the release of this information would prohibitively impact the ability of Ministers to meet with officials and external stakeholders to discuss ongoing policy development”.

But Qureshi is calling for the health secretary to publish the report using powers under the National Health Services Act 2006 and Article 10 of the Human Rights Act, which protects our freedom of expression.

“Managing a viral pandemic is completely different from fighting against acts of aggression by military or terrorist organisations,” he said.

“There is no persuasive argument for secrecy when managing a healthcare crisis.

“Successful science and healthcare provision depend on transparency, peer review, collaboration and engagement with the public.”

On Sunday, the doctor sent the health secretary an urgent pre-action protocol letter – which sets out next steps ahead of any potential court hearing – requesting a response by 4pm the following day.

On Monday evening, Qureshi confirmed to EuroNews that the health secretary had responded and that his legal team are now considering next steps before making any further announcement.

The Department of Health has been contacted for comment.

Dr Viz and Dr Joshi are raising funds to cover any legal costs they incur using an online fundraising page.

Dr Qureshi is raising funds to cover any legal costs he may incur using an online fundraising page.