On this year’s International Day for the Elimination of Violence Against Women and Girls (VAWG), we explore how gender-based violence encroaches on human rights and whether the UK is taking adequate measures to wipe it out.

The global day of awareness on 25 November launches 16 days of activism that will conclude on 10 December 2021, International Human Rights Day. An opportunity to shine a light on the oppression that women and girls experience daily, today’s International Day for the Elimination of VAWG offers a moment to reflect on whether society has made progress towards ending violence against women and girls.

“Talking about violence against women shouldn’t be limited to a day and we should always be talking about, and tackling, the issues,” said Professor Parveen Ali, senior lecturer at the University of Sheffield and lead tutor on an open-access course available on FutureLearn designed to educate people on how to support victims of domestic violence. “Violence against women is a bitter reality and women experience abuse within public and private spheres. We need to do more to make provisions for women to be able to talk about their experiences and seek help.”

Globally, nearly one in three women face abuse in their lifetime. In the UK, on average a woman is killed by a man every three days. A UN Women investigation revealed that 97% of UK women aged 18 to 24 have been sexually harassed, 96% of whom did not report the incident because they believed it would not change anything.

Clearly still prevalent in day-to-day society, violence against women and girls imperils rights enshrined in the Human Rights Act, including the rights to life, freedom from inhuman or degrading treatment and protection from discrimination.

“We can no longer claim we don’t know of the alarming extent of gendered violence,” said Carey Philpott, head of communities at Support And Action To End Domestic Abuse (SATEDA), a domestic abuse charity. “What society needs now is to act on that evidence and a good place to start is by using language as a tool to shift toxic attitudes and beliefs that underpin gendered violence.”

“Women do all these protective things but we don’t always consciously realise that we do it,”

“Women do all these protective things but we don’t always consciously realise that we do it,”

What Forms Does Gender-Based Violence Take?

Gender-based violence manifests in a multitude of ways, such as sexual harassment, sexual violence, physical abuse and emotional abuse.

By the age of 16, one in five women has experienced some form of sexual violence. In 2020, the crime survey for England and Wales estimated that 1.6 million women aged 16 to 74 experienced domestic abuse in the last year, and 81 women were killed in a domestic homicide in the year ending March 2020. Annually, approximately 85,000 women aged 16-59 experience rape, attempted rape or assault by penetration in England and Wales.

Remaining vigilant for the potential for violence places a heavy, and permanent, burden on women’s and girls’ shoulders. Recently, the high-profile murders of women like Nicole Smallman, Bibaa Henry and Sarah Everard have brought the gravity and severity of the danger faced to the forefront of women’s minds. 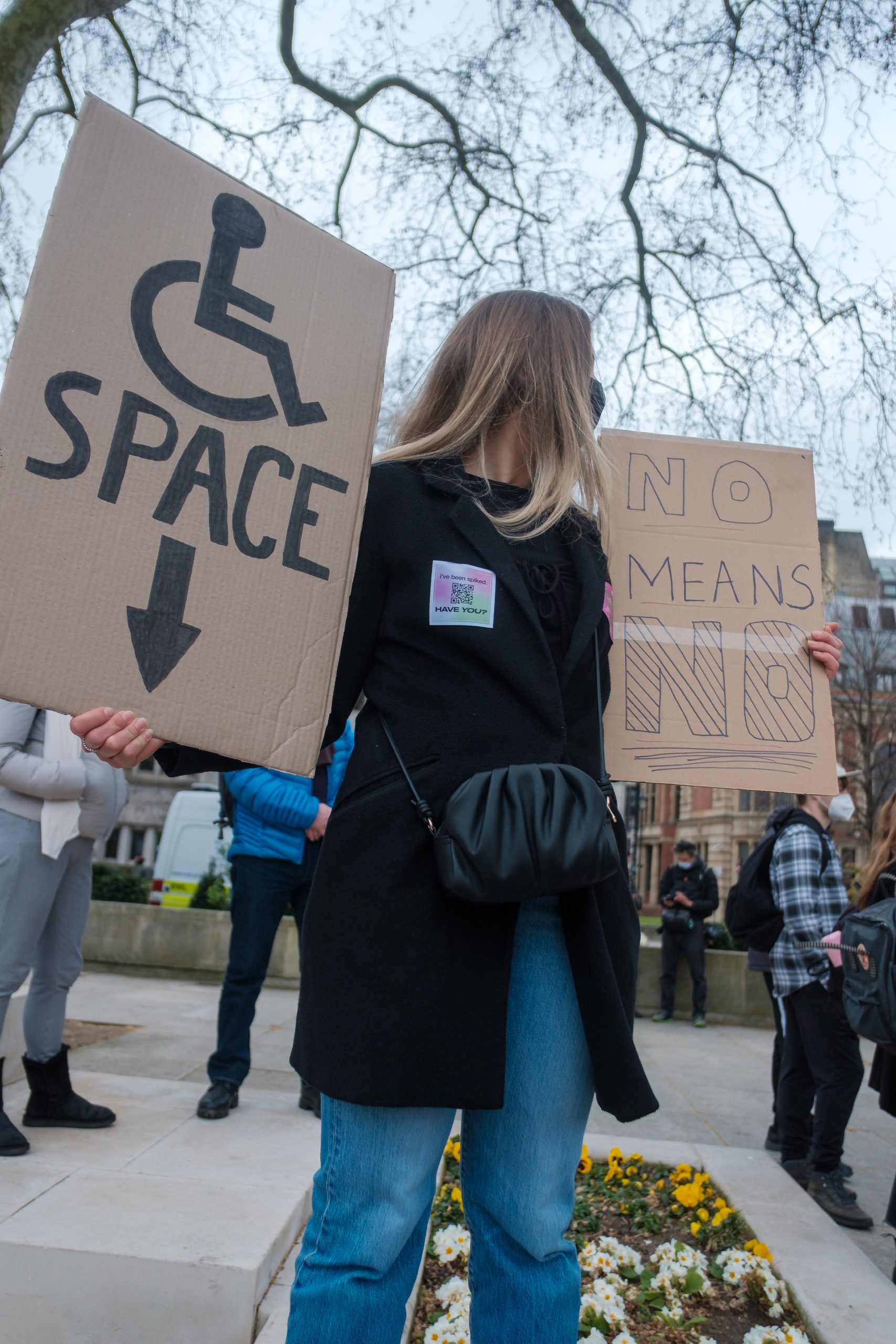 “Women do all these protective things but we don’t always consciously realise that we do it,” said Ali. “You’ll decide on taking a shorter or a longer route, lighter or darker areas and so much more. It affects our lives from day one. It starts from very early on and it’s threaded through the fabric of society and the network of our lives.”

The necessity for constant vigilance places relentless pressure on women and girls. Gender-based violence happens in public and private spaces and affects women from all backgrounds, leaving many in a persistent state of fear.

Mel Mullings, a train driver for London Underground and industrial relations representative for the RMT Union, faces this fear every time she goes to work. Her company uses a taxi system to transport workers to their starting stations but her pick-up location is unsafe.

“My area is not safe for a woman to be walking around at that particular time in the morning, so my partner will never allow me to walk to collect my taxi alone,” she explained. “I get up at three o’clock in the morning, he gets up and then he drops me to take the taxi. Often taxis don’t get there on time and that means waiting in not very well lit areas.”

Discussions of classing misogyny a hate crime make news headlines but can seem a pipe dream, with the Prime Minister having rejected the call. Even if it does become law, misogyny would not be wiped out overnight, so are our institutions capable of doing what it would take to end gender-based violence in UK society?

In July, the government released its strategy on tackling violence against women and girls, which included sweeping aims to increase the support available for victims and to hold perpetrators to account.

“Eradicating male violence against women can only come from systemic changes in our government, justice system, schools and workplaces, which requires collaboration and a shift in culture,” said Philpott. “It won’t come from handing out rape alarms, adding more street lighting and deploying more police out across the country, which places responsibility on the victims rather than the perpetrators and ignores women’s decreasing trust in law enforcement. We can only eradicate male violence against women and girls with increased preventative measures, not reactive ones.”

Although Sarah Everard’s murder at the hands of a police officer has sparked debate about police restructuring and retraining, the current police set-up remains the first port of call for victims of gender-based violence. 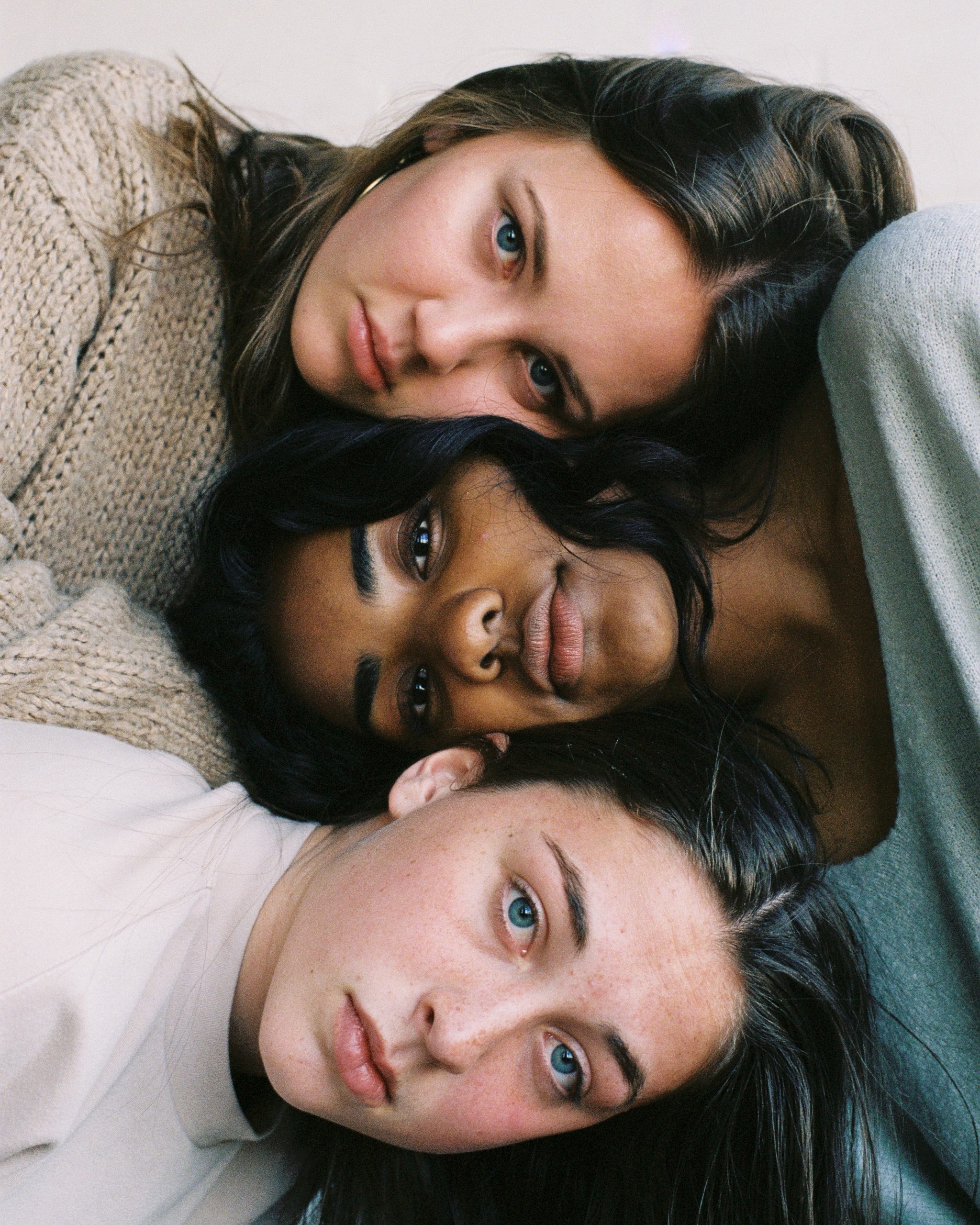 Asahela Rose, an entrepreneur and business owner, is fighting to take her case to court after being sexually assaulted in 2019. She believes the police force needs considerable work to be able to help survivors more effectively.

“When I called the police, they sent eight male police officers to my home,” she explained. “Considering I was just assaulted by a male, it was not the best start. Then, moving forward, the next step of the investigation was very traumatic because you’re having to take your clothes off, they’re examining your body and taking pictures. The assault was traumatic enough but going through the process of the justice system has been far more traumatic than the assault itself.”

While Rose has been supported by an “amazing” Independent Sexual Violence Adviser (IVSA) who has advocated on her behalf, she says there are simply not enough advisers available to help everyone and that the police need more training to counteract biases.

“I’ve come to realise, having been in the system, because of my own experiences, that there is a difference between how I as a Black woman am being treated during my case versus how some of the girls and other women that I’ve encountered in this journey of mine,” she said. “I think more funding needs to be put into the police force, in terms of educating the police officers and how to deal with different people from different races, backgrounds, religions, because every case is unique.” 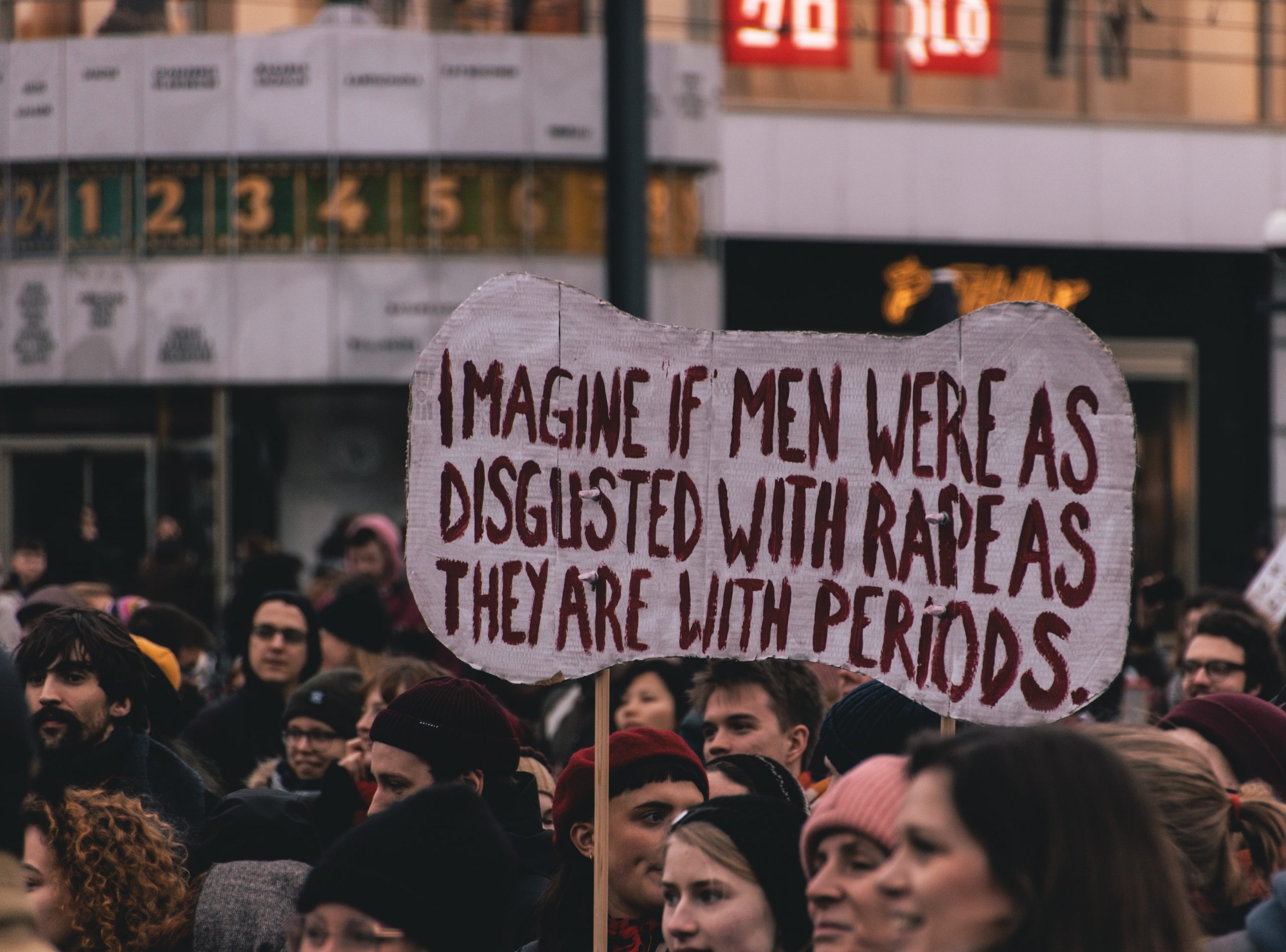 Additionally, Rose hopes that the police force will stop requesting victims’ medical records – something she has refused to provide because her medical history is not relevant to the case – because it treats survivors like perpetrators with something to hide.

“Only when men, politicians, judges and the police truly exercise self-criticism, hold themselves accountable and join our struggle will we see lasting change,” said Philpott. “We need them to name misogyny, systemic gender inequality, toxic masculinity, rape, femicides, and coercive control, and we need them to understand that male violence against women and girls is at epidemic levels and happens in a context of patriarchy, fuelled by sexism and misogyny which goes unreported and unchallenged.”

What Are Women, Girls and Organisations Doing To Eradicate Gender-Based Violence?

Women and girls are shouldering the burden of tackling gender-based violence and addressing how it affects them based on their race, religion, economic status, gender identity, sexual orientation and disability status.

Following Everard’s murder, Mullings coordinated a series of meetings for her female colleagues to share their experiences of sexual violence and harassment. Sistah Space, an organisation providing specialist support for African and Caribbean heritage women affected by abuse, is campaigning to introduce Valerie’s Law, which would introduce mandatory training for police and other agencies for dealing with domestic violence in Black communities. The Speak Up Space, a peer-led space for people to share experiences of sexual violence and harassment, is using its platform to offer support to survivors all over the UK.

“I am very sad that we will be leaving this year behind feeling more vulnerable and less safe when it comes to violence against women,” said Diana Nilsson Shafikova, a jeweller. “What gives me hope is witnessing the way women themselves stood up for their essential right to feel safe. We didn’t just go out on the streets to protest and start offering a safe walk or lift home to each other, we also learned to lobby our interests on a political level.” 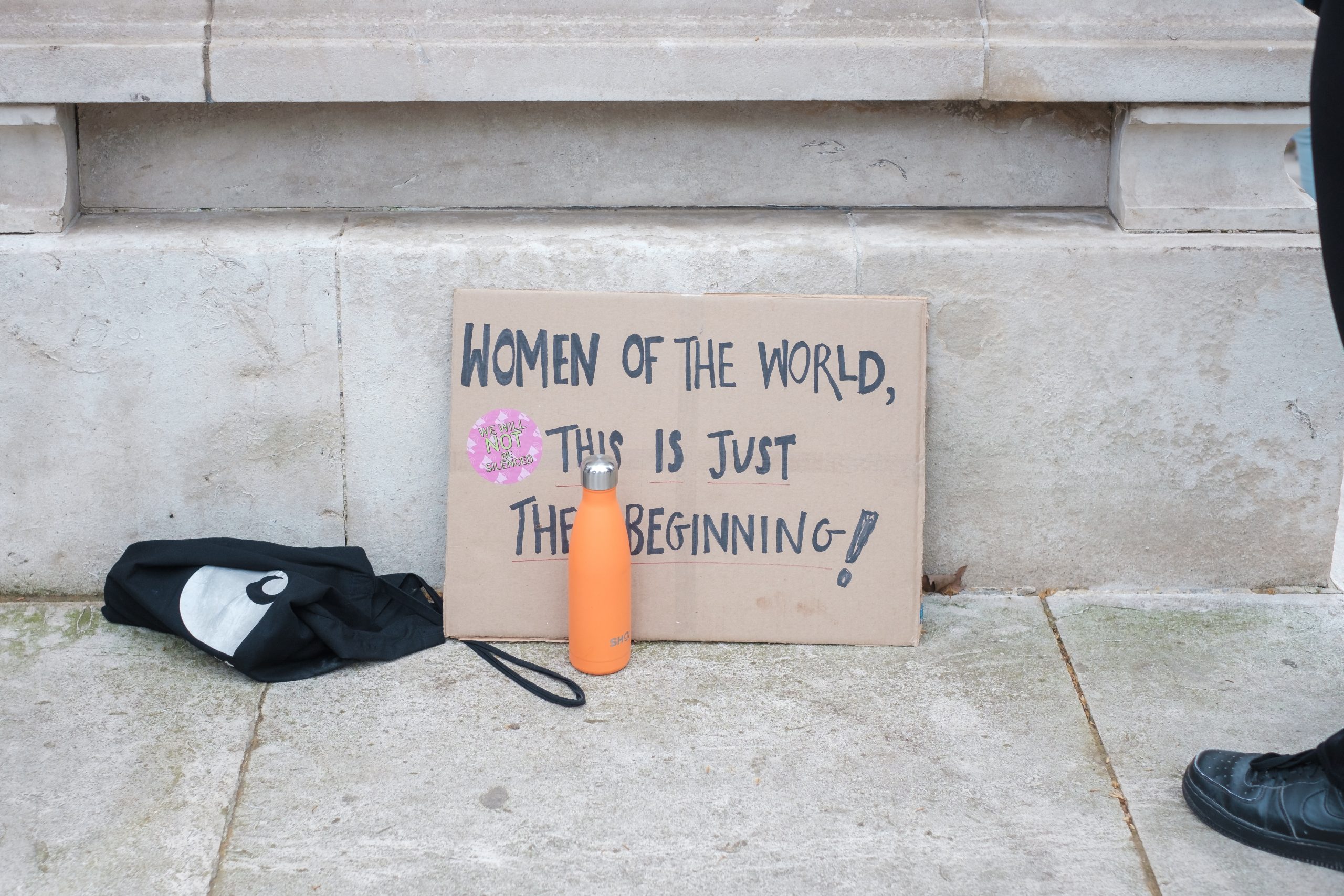 Women and girls in the UK are slowly becoming freer to discuss their experiences of gender-based violence more openly. However, key voices are missing from the movement to make lasting change.

“Men are not challenging each other on their behaviours,” explained Mullings. “They seem to think it’s completely up to us as women to say we don’t like something. We need the men to really step up and to advocate on our behalf that these behaviours are unacceptable.”

The statistics on gender-based violence remain shocking. While incremental progress is being made, there is much more to do before the International Day for the Elimination of Violence Against Women and Girls can be celebrated as a remembrance of what came before rather than acknowledged as a necessary reminder of how gender-based violence still threatens the rights of women and girls.

Justice / 1 Oct 2021 In the wake of #MeToo, how aware are we of image-based sexual abuse?
Justice / 6 Mar 2020 'This Is The First International Women's Day I Will Celebrate Since My Attack'
Health / 5 Feb 2021 ‘Women Are Slipping Through The Net’: Specialist FGM Midwife Explains The Pressures Of COVID-19
Justice / 27 Nov 2019 Grace Millane's Trial Exposes A Dark Trend In Coverage Of Violence Against Women