Charities are calling for safe and legal routes to claim asylum in France and the UK as the situation in migrant camps in Calais and Dunkirk deteriorates amid the Covid-19 crisis.

Some volunteer groups providing humanitarian support to the makeshift camps in northern France have been forced to pull out due to safety concerns, while others still on the ground say the situation is at its “worst” in years.

Charity Care4Calais told EachOther that French authorities have continued a “harsh” campaign of evictions against the hundreds of people believed to be staying in the camps.

Environmental charity Roots, who are working on the ground in Dunkirk, said that camp dwellers housed in temporary accommodation provided by the authorities have complained of overcrowding and “inedible food”.

Meanwhile, since April more than 1,000 migrants have attempted perilous journeys in small boats across the English Channel only to be intercepted by UK and French authorities.  The most recent instance took place on 15 June as Border Force vessels blocked five boats carrying 49 men and women from countries including Iraq, Sudan and Syria, according to the BBC.

‘People are in rags’

Clare Moseley, who has been leading Care4Calais for five years, said that the impact of the pandemic has been significant – despite there not being “many” Covid-19 cases in the camps.

“We don’t seem to have had many cases at all,” she explained. “But what has happened is all the knock-on effects have been bigger.”

In March, many NGOs had to leave the camps, including Refugee Community Kitchen (RCK), one of the main providers of hot food to migrants living in northern France. 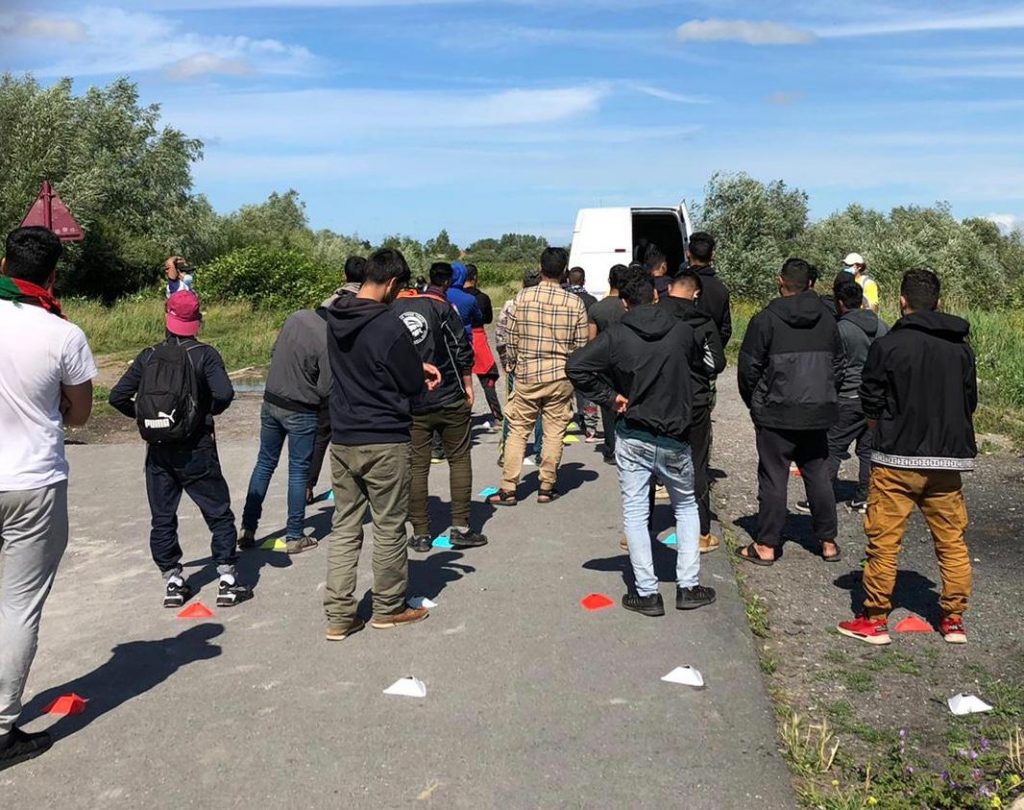 Migrants in a refugee camp in Calais. Credit: Courtesy of Care4Calais

The disruption meant that Care4Calais had to stop its other services to focus solely on food for six weeks, leaving residents without adequate clothing and mental health support.

“People were wearing what I would call rags – just horrible clothes and shoes – because we weren’t doing any of the things that we would normally do,” she added.

In June, RCK announced that it was gradually reopening its services.

Moseley claimed that authorities had continued to carry out “harsh” evictions of residents every two days in the camps.

“They go in and they take the tents, they make them move, they don’t let them sleep through the night,” she said.

“In a pandemic, they are taking away their tents and sleeping bags, which is their ability to keep warm and healthy essentially.”

Moseley said that that “biggest problem” for migrants in the camps remains the situation regarding asylum policies in both France and Britain.

Migrants have gathered in camps around Calais since the 1990s, with some hoping to cross into the UK while others may be homeless while awaiting a decision on their asylum applications in France.

In the UK, people wanting to claim asylum can only file an application once in the country.

“We have ordinary people, who are refugees through no fault of their own, who feel forced to basically make an illegal journey and risk their lives – and that is the problem,” she said.

“The only way to fix that is for there to be a safe and legal route, for them to be able to claim asylum in France without having to risk their lives, and for them to be put in proper accommodation while they’re doing it.”

Thomas Gilbert, who runs Roots, an environmental charity working on the ground in the Dunkirk camps, said that authorities had continued to carry out evictions throughout the pandemic.

Gilbert said that authorities had provided accommodation to some camp residents, which was a bus journey away, but news about these facilities had left residents fearing that “if they got onto the buses they would struggle to get back to Dunkirk”.

He added: “Information about the accommodation centres lacked and the information that we did have was concerning. We heard reports of inedible food and crowded rooms.”

Gilbert said that, until there are legal routes for migrants to cross to the UK, authorities need to provide “adequate accommodation and services by the state rather than be met with hostility and police brutality”.

Tents in the Calais refugee camps. Credit: Courtesy of Care4Calais

Oxfordshire Refugee Solidarity is among the groups who have currently had to suspend aid trips due to the Covid-19 crisis.

Norman Wood, an organiser at Oxfordshire Refugee Solidarity, explained: “The situation at the moment is basically the worst it’s been in years. Covid has led to a drying up of donations and volunteers to the charities.”

Like Moseley, he said that the authorities had continued to clamp down on residents living in the camps with harsh measures.

“What little – almost nonexistent – help from the authorities that there was has been seriously curtailed and, if anything, the daily cycle of violent policing by the CRS riot police has been stepped up,” he said.

“Injuries are commonplace and tents, sleeping bags and other possessions are routinely destroyed lasting on average only a couple of days.

“Amongst the refugees there is little or nothing they can do to protect themselves from COVID 19 and this is a significant problem.”

Last month the Home Secretary Priti Patel announced that she is considering introducing new powers to turn back migrants off the coast. It came weeks after the Home Office confirmed a record number of migrants had crossed the Channel on 8 May – 145 people, according to the Guardian.

EachOther has contacted the Home Office, France’s Ministry of the Interior, and Port Boulogne Calais for comment.

A volunteer-led charity that supports refugees in Calais and France.

A recycling and environmental charity helping with the refugee crisis in northern France.