By Why the UK Visit of the UN Special Rapporteur on Extreme Poverty and Human Rights Should Be A Wake Up Call, 5 Nov 2018

The UN Special Rapporteur on Extreme Poverty and Human Rights is in the UK on an official visit examining the impact of austerity on poverty and rights. This should be a wake up call to the government and all of us.

Professor Philip Alston’s unprecedented visit comes after nearly a decade of austerity-related budget cuts and a few months before the UK departs from the European Union.

Alston will tour the UK and gather evidence to examine the impact of austerity before publishing an interim report in mid-November. Some of the areas he will look into include welfare reforms, including universal credit, housing and the possible impact of Brexit.

He has received 280 submissions from civil society, individuals, and academics evidencing the effects of poverty on society in the UK. This is by far the most submissions that he has ever received prior to a country visit. Some of these are now available online.

Dr Koldo Casla, Policy Director of Just Fair, a charity focusing on social justice and human rights, said: “The world is watching with great concern the erosion of human rights in Britain after years of austerity and on the brink of Brexit.

“Civil society groups and a number of international bodies have sounded the alarm bell about child poverty levels, rampant inequalities and the negative effects of the Universal Credit rollout, among other issues. The prospects of Brexit make it more urgent than ever to enshrine socio-economic rights properly in our laws and policies.”

Here are some of the key areas of concern. Over recent years the UK has undertaken a significant review of its tax and welfare system. Many of these measures undertaken by the UK Government have not taken into account the UK’s human rights obligations.

An impact assessment into tax and welfare conducted by the Equalities and Human Rights Commission found that these changes have disproportionately impacted those who were already the worst off.

The flagship reform, Universal Credit has been plagued with issues since the start. Just recently the House of Commons Public Affairs Committee found that the delivery of Universal Credit has caused unacceptable hardship to claimants and Minster for Work and Pensions, Esther McVey MP admitted than some people are worse off under the new system.

Welfare payments have repeatedly been found to not be sufficient so as to ensure an adequate standard of living. Child Poverty Action Group found that families on benefits now have to live without 40% of the budget needed for a socially accepted minimum standard of living.

The UK Government must urgently restore the link between the rates of state benefits and the cost of living to make sure that social benefits guarantee an adequate standard of living.

The increasingly punitive welfare system that has an emphasis on conditionality and sanctions undermines the concept of welfare rights that was a central element to the development of the welfare state in Britain. Vulnerable people are those who have been the most affected by the increased use of sanctions. A recent study found people who were homeless were four times more likely to be sanctioned than the claimant group as a whole.

Ian Blackford MP reminded the House of Commons recently that social security is a human right and is recognised as such in Scotland. The right to adequate housing is guaranteed in international human rights treaties ratified by the UK, and is inextricably linked to the protection of the home and the right to a private and family life.

Record numbers of families are now renting in the UK and an estimated one third of millennials will rent for all of their lives.

Despite the growth of the rental sector, the UK is seriously lagging behind in its protection of the Right to Housing. As it stands the law does not protect tenants if a landlord fails to maintain a property in a standard that is fit for human habitation, the latest edition of the English Housing Survey found that 38% of all privately rented homes had at least one indicator of poor housing.

Unfortunately homelessness is on the rise again. The National Audit Office has reported that the ending of private sector tenancies is the biggest single driver of statutory homelessness in England. Section 21 of the Housing Act 1988 permits landlords to evict tenants with no fault and without giving a reason and in 2015 80% of private sector evictions were no-fault evictions under Section 21. Despite the Right to Food being included in a number of international human rights standards that the UK is a signatory to, there are still an estimated 8.4 million people in the UK that have a limited or insecure access to food.

Household food insecurity can present itself in different ways. For example it might be the ten percent of elderly people who are affected by malnutrition due in part to cut backs in care services such as meals on wheels, or the one in four parents who told End Hunger UK at the beginning of the year that they have been forced to skip meals.

The roll out of Universal Credit has been identified as a key causal factors of the recent rise in food insecurity. After making the switch to Universal Credit, a young member of the Darwen Gets Hangry campaign describes what her experience was like during the five week waiting period:

“It were hard. It were really hard. We had to sometimes go without the biggest meals or we had to have horrible food. Cheap rubbish food.” Corey, aged 15

We need our Government to start taking human rights-based approaches to tackling hunger in order to find long term dignified solutions to the high levels of food insecurity that are plaguing the country. At the time of writing it is unclear what sort of relationship the UK will have with the European Union after March 2019, but there is a great deal of concern over what impact Brexit might have on human rights and living standards.

The EU Withdrawal Act 2018 establishes that, following the UK’s departure from the EU, nearly all EU law will be automatically retained and will be directly applicable in the UK. The Act however makes clear that “the Charter of Fundamental Rights is not part of domestic law on or after exit day”.

The impact of this omission is significant because there is no other constitutional mechanism at the UK level by which courts can invalidate laws that fail to meet basic human rights standards. As currently drafted, the Trade Bill grants extraordinarily wide powers to ministers to amend retained EU law, including on equalities and human rights

If there is an economic downturn post Brexit as has been predicted, recent trends such as the rise in homelessness and emergency food aid usage will be exacerbated and our social welfare system that is currently buckling under pressure might not be able to keep up with growing demand.

Kath Dalmeny Chief Executive of Sustain, a charity working on food poverty, notes that no-deal Brexit could have serious repercussions for the UK’s food security. “The disruption caused by a Brexit without the UK agreeing a sensible trade deal with the European Union would be seriously damaging and potentially push a lot of our fellow citizens into more and worse food insecurity.”

The UN Special Rapporteur’s visit should be a wake up call both to government and to all of us.

The UK is the fifth richest country in the world, yet, after nearly a decade of austerity, more and more people are suffering from poverty.

We must work together to create a more equal society for all and to do this we need our government to start taking socio-economic rights more seriously.

If you would like to find out more about the issues that have been discussed here you can read the submissions made by Sustain and Just Fair to the UN Special Rapporteur. 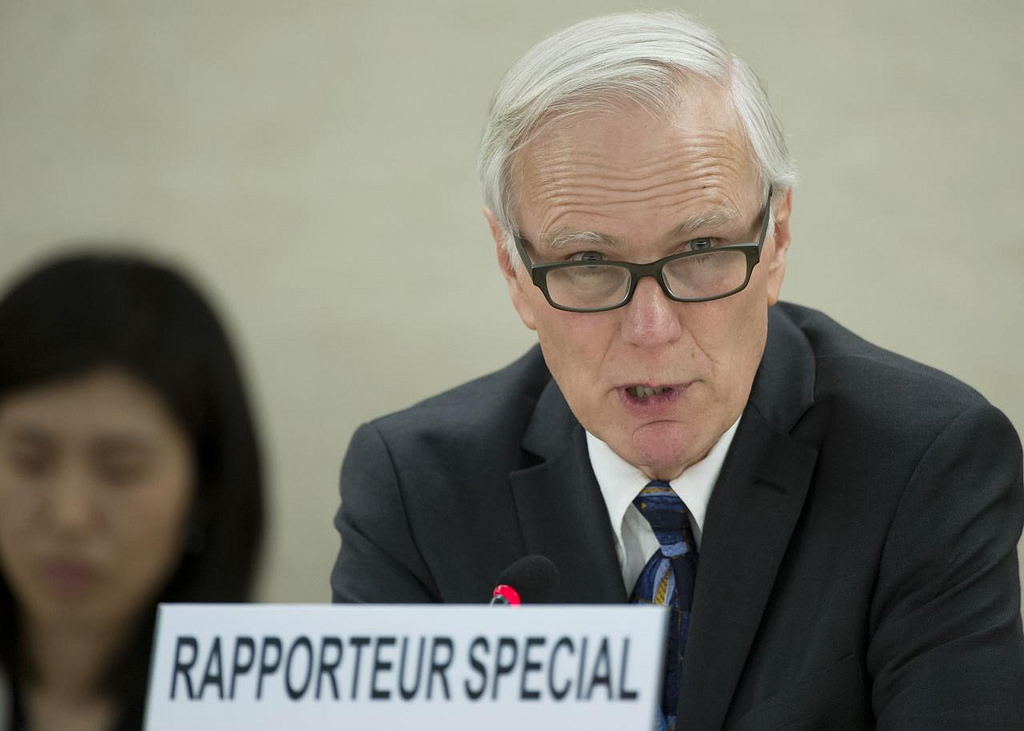 The UN Special Rapporteur on Extreme Poverty and Human Rights is examining the impact of austerity on poverty and rights in the UK. This should be a wake up call says Imogen Richard-Bishop.

The UN Special Rapporteur on Extreme Poverty and Human Rights is examining the impact of austerity on poverty and rights in the UK. This should be a wake up call says Imogen Richard-Bishop.