This opinion piece first featured on The British Institute of Human Rights guest blog. The views expressed in it belong to the author and do not necessarily represent the views of EachOther.

Six years ago next month, I began to fall into a mental health crisis. I spent November that year in and out of A&E, begging my community psychiatrist for more support, and with my mum sleeping on a mattress on the floor next to me in my bedroom.

Come December, it was decided that me and my family could no longer cope in the community, and I was admitted to an acute CAMHS (Child and Adolescent Mental Health Services) ward. This is a scary and often traumatic experience, particularly because I am an autistic person.

You learn about your rights on the spot. Terms you’d never heard of before become key to your existence – words you hear every single day, whether for yourself or your fellow patients, that you need to comprehend to be able to advocate for yourself. From the idea of a “section” or being “informal”, to whether you’re Gillick competent, and colloquial terms like “leave” – there’s so much that suddenly becomes part of your vocabulary. 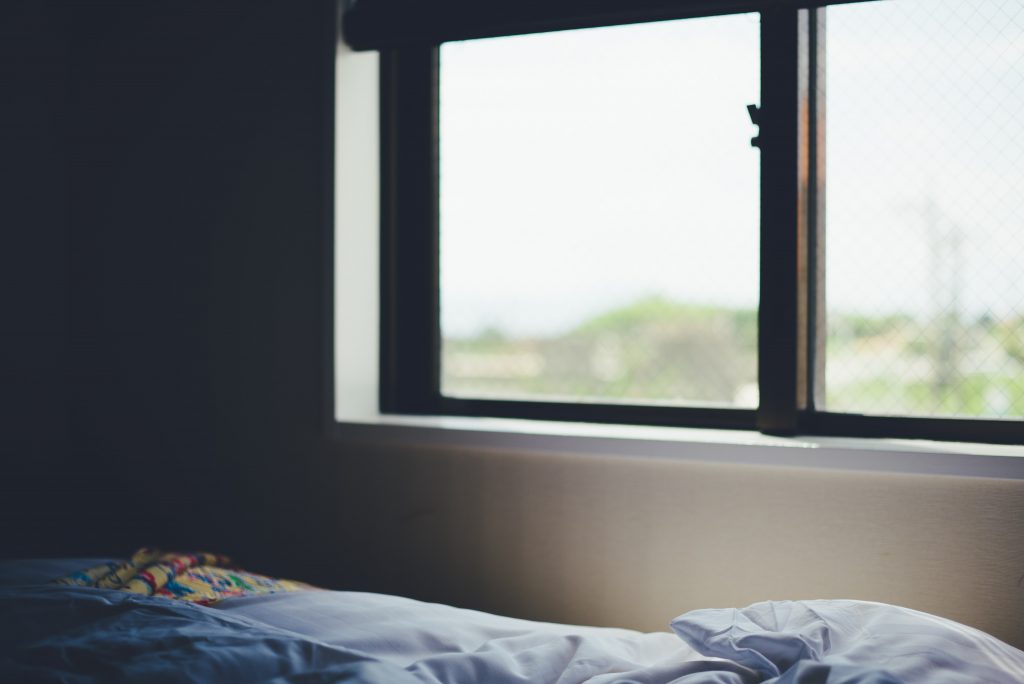 In-patients should know more about their rights, as should staff

But even with all of that, I don’t think I knew at the time how much the Human Rights Act truly impacted my life as an in-patient. I believe that in-patients and unit staff alike need to know more about the rights of those in units.

Even now, I learn more every day about what I deserved to have access to, that I didn’t. If I had been properly educated rather than picking it up myself, I could have advocated more and had a less traumatic experience.

A variety of the Articles in the Human Rights Act of 1998 are key to your experience as a mental health in-patient. One you come up against almost immediately when you enter a ward is that of Article 1, Protocol 1 – the Right to Peaceful Enjoyment of Possessions. There are seemingly endless lists of items you are not allowed: some that can’t be on the ward at all and some kept in lockers you need a member of staff to access.

“Blanket bans” are when units do not look at the individual when deciding what items in-patients can have; instead, not allowing anyone to have them. For many, the main one of these is a mobile phone. I wasn’t allowed a phone. Instead, we had two phones between eighteen of us for a few hours a day, where you would will your family and friends to pick up at the very moment you got hold of it for ten precious minutes, if the signal even held up long enough.

We also have Article 3, the Right to Be Free from Torture and Inhuman and Degrading Treatment. Many in-patients experience restraint, either physical (limiting or obstructing the freedom of a person’s bodily movement) or chemical (when a drug is used to restrict the freedom or movement of a patient, or to sedate). This has led to multiple deaths, one of the most notable being that of Oliver McGowan who tragically died after being given antipsychotic medications. Doctors will now receive mandatory training around autism in his name.

The second is that of Seni Lewis, who also tragically died after physical restraint by eleven police officers on a mental health unit. This has led to the Mental Health Units (Use of Force) Bill, meaning units must take steps towards reducing force used, but we know that this is still a massive problem, and particularly impacts autistic people and those from racial and ethnic minorities. 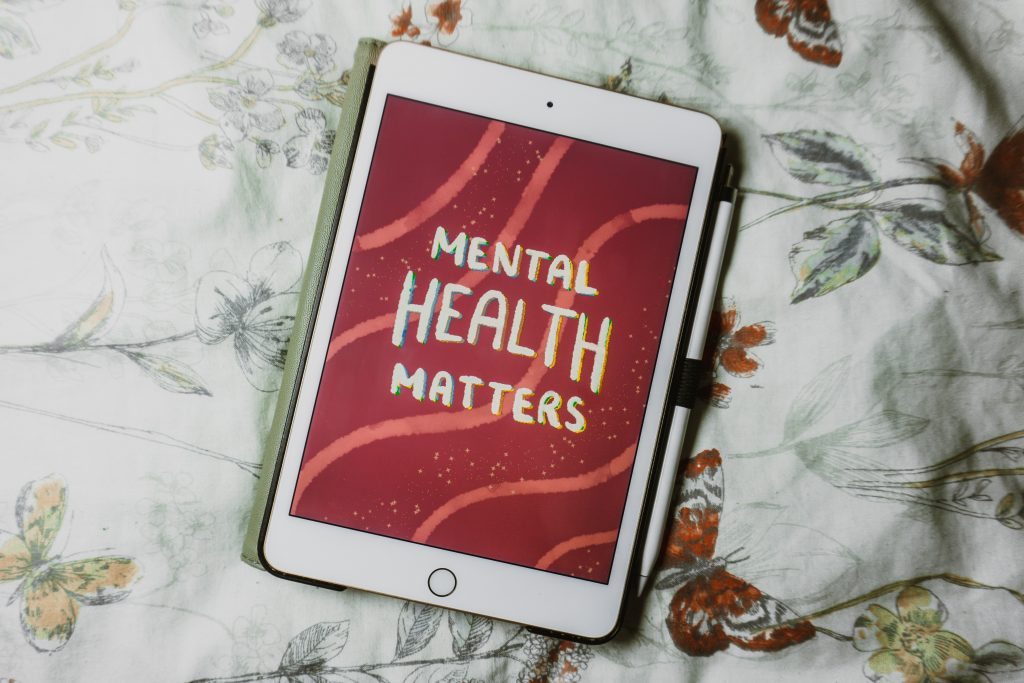 You have the right to advocate for yourself

The Human Rights Act means that those on in-patient wards have the right to advocate for themselves, or, more commonly, the right to ask someone to advocate for them. The mental health system still has deep-rooted issues, and institutionalisation is still used far more than it should be, but the importance of the Human Rights Act can be found in the ways we see patients and their families protecting themselves and standing up against this problematic system. You can see an example of this from Article 1 on BIHR’s rights explainers.

It is the Human Rights Act that means those who are in-patient are entitled to have more say in their care, to have access to education, to ask for possessions when blanket bans are not proportionate.

It allows us to examine whether the acts of staff, doctors and decision makers are lawful, legitimate, proportionate – necessary. It means there are responsibilities to look at patients as individuals, get them the support they need, empower them. It is why patients should expect to be respected, expect the adults looking after them to keep them safe.

This is not always the reality at the moment. Stays on CAMHS wards have short-term and long-term impacts. For me, I am still dealing with my trauma and the way it affected me nearly six years later. I still hear the alarms and remember being squashed into corners, petrified, or pacing corridors, my possessions locked in the office.

You end up spending your days surrounded by your rights, possible infringements of them and advocating in any ways you know how.

Because we know that not all staff are educated and the Human Rights Act isn’t always upheld, the British Institute of Human Rights is leading on training staff on it, working alongside me and two others with Lived Experience, Hanna and Kirsten, to make sure it reflects our true experiences.

It is a system I am determined to make better, one bit at a time, and the foundations of that lay in the Human Rights Act – and education around it.

If you or someone you know might be struggling with mental health, EachOther has collated some resources which may be helpful in our Spotlight on Young People and Mental Health. 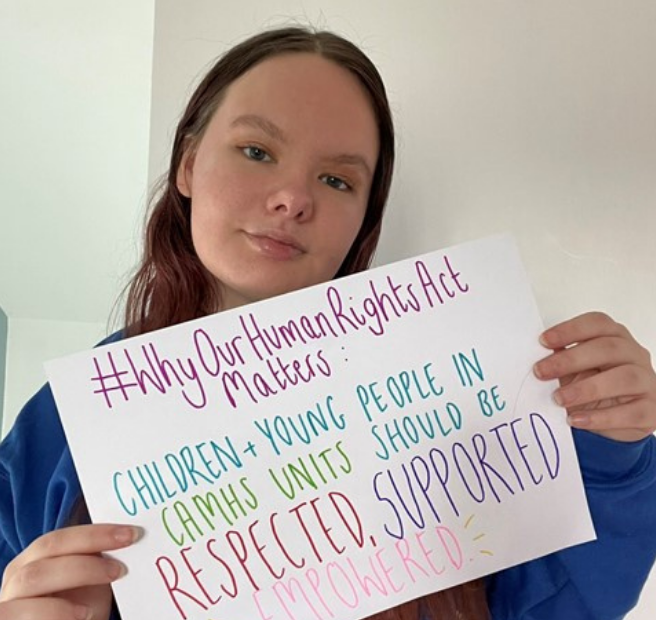 I am an experienced activist, writer and speaker on topics including neurodivergence, chronic illness, asexuality, mental health and more, with by-lines in VICE, The Metro, The Unwritten, Conscious Being, and more. I am an autistic Expert by Experience working with NHS Black Country on making mental health care better for autistic young people, and work with the West Midlands CAMHS Provider Collaborative on Participation and Engagement as an EbyE. I am also a Lived Experience Consultant for the British Institute of Human Rights.

I am an experienced activist, writer and speaker on topics including neurodivergence, chronic illness, asexuality, mental health and more, with by-lines in VICE, The Metro, The Unwritten, Conscious Being, and more. I am an autistic Expert by Experience working with NHS Black Country on making mental health care better for autistic young people, and work with the West Midlands CAMHS Provider Collaborative on Participation and Engagement as an EbyE. I am also a Lived Experience Consultant for the British Institute of Human Rights.