Sex Workers Are Being Denied Their Rights. It’s Time To Respect Them.

By Sex Workers Are Being Denied Their Rights. It's Time To Respect Them., 4 Mar 2019

Yesterday, on International Sex Workers Rights Day, my thoughts were with my courageous and indefatigable friend, sex worker and activist Laura Lee who died just over a year ago. Laura, who herself had a law degree, was due to take a case to the High Court to challenge on human rights grounds the controversial law, introduced in Northern Ireland in 2015, which banned paying for sex.

The law came into force despite the overwhelming majority of sex workers – 98 per cent in the survey commissioned by the Department of Justice – being against it. Since its introduction, sex workers in Northern Ireland report that the law has had the exact impact they predicted when DUP peer Lord Morrow first pushed for its introduction – clients are more secretive, sex workers have less control over their work, and violence against them has risen.

‘Sex Workers Have Less Control and Violence Has Risen’ You can sign the English Collective of Prostitutes’ petition calling for decriminalisation here.

According to Ciaran Moynagh, the solicitor who represented Laura in her legal challenge, quoted yesterday in Belfast Live, despite there being only two convictions the law has “managed to create a chill factor, making these workers even more marginalised than they already were”.

This is a stark reminder of why we need to listen most to those who will be affected by laws being proposed. Tragically, the voices of sex workers are frequently ignored by policy-makers in the UK.

[The law has] managed to create a chill factor, making these workers’ even more marginalised.

As the founding CEO of National Ugly Mugs (NUM), an award-winning national charity which seeks to end violence against sex workers, I spent almost six years at the heart of both practice and policy in this area. During this time, I worked closely with thousands of sex workers, as well as frontline support projects, police officers at every level, academic experts, and policymakers throughout the UK.

The reality is that there is a great deal of consensus amongst those with any real expertise or experience.

Although the media coverage on this topic suggests that the discussion over whether sex work should be criminalised is deeply polarised, the reality is that there is a great deal of consensus amongst those with any real expertise or experience. The vast majority of the key experts – sex workers themselves, frontline support services, and academic experts – support decriminalisation, which is also advocated by Amnesty International, UN Aids and Human Rights Watch.

A Growing Consensus For Decriminalisation Is Drowned Out As part of the Home Affairs Select Committee (HASC) inquiry into prostitution in 2016, NUM conducted a survey of sex workers and organisations providing frontline support services to them, in association with Northumbria University.

When asked which model of governance should be adopted the vast majority suggested decriminalisation – 67 per cent of sex workers and 61 per cent of services picked it over a range of other options, with about 17 per cent of organisations calling for a legalised system similar to that in The Netherlands.

Notably, the so-called Nordic Model which criminalises clients, which was introduced in Northern Ireland, was only preferred by two individual organisations and five individual sex workers. This model is supported by a small but vocal group of campaigners, religious groups and some MPs.

The quality of debate is poor and not well informed and sex worker perspectives are often drowned out.

Their position is based on an ideological view of sex work as uniquely and inherently harmful, as well as a desire to use legislation to send a message to society. This effectively means ignoring any evidence that decriminalisation has had a positive impact where it has been adopted.

Though advocates of the Nordic Model claim that the intention is to eradicate prostitution by shifting the burden of criminalisation away from the sex worker to the client to end demand, the reality is very different.

‘Actual Evidence Rarely Gets A Look In’ Perhaps unsurprisingly, whenever the issue of sex work comes up in Parliament the broad consensus which exists amongst sex workers and the majority of academics and service providers isn’t reflected. The quality of debate is poor, not well-informed and sex worker perspectives are often drowned out by hostility, misinformation, ideological rigidity, and the conflation of consensual sex work with rape and human trafficking.

Actual evidence – and any notion of harm reduction – rarely gets a look in. Female MPs have told me they fear speaking out in favour of sex worker rights due to the inevitable backlash and bullying from their colleagues. In one debate in Parliament last year, a Government Minister was openly heckled by MPs for using the term “sex worker” which is widely regarded as the least stigmatising term for a group of marginalised people and the term preferred by sex workers themselves.

Female MPs have told me they fear speaking out in favour of sex worker rights due to the inevitable backlash and bullying from their colleagues.

The HASC Inquiry, which listened to sex workers and carefully weighed up the evidence, was a rare exception. The interim report recommended that sex workers themselves should be decriminalised and acknowledged that the brothel keeping laws in the current system presents sex workers with the choice of working legally (alone) or safely (in groups). By highlighting how deeply flawed the current system is and recommending that sex workers themselves should not face criminal sanction, the report managed to reflect some of the common ground which exists between the vast majority of sex workers and some of the most ardent advocates of the Nordic Model.

The implementation of the key recommendations of the Home Affairs Select Committee is the focus of the English Collective of Prostitutes #MakeAllWomenSafe campaign for International Sex Workers Rights Day. The campaign is underpinned by a powerful video which highlights the absurdity of the laws in the UK which criminalises sex workers who chose to work together for safety.

I personally supported women and men who had been attacked and raped, and were too scared to report it to the police.

During six years as CEO of a national sex worker safety charity, I personally supported women and men who had been attacked and raped and were too scared to report to the police. The fact that our laws in the UK forces marginalised people who are frequently targeted by offenders to work alone, as well as criminalising people, mostly women, who are doing whatever they can to survive is utterly unjustifiable and unethical.

‘Sex Workers Are Our Mothers, Daughters, Sisters, and Brothers’ Sex workers are our mothers, daughters, sisters and brothers. They are women who can’t afford to feed their kids due to benefit sanctions, students desperate to pass their exams but who can’t afford their tuition fees and living costs, people fleeing abusive relationships, trans people forced out of work due to employment discrimination, people on zero-hour contracts who have no idea when their next pay cheque will arrive, carers who earn so little that they need to supplement their income to live, disabled people who can’t work full-time but don’t qualify for support and migrants trying to support families back home. To those seeking to eradicate sex work at whatever cost I say first you must eradicate poverty, destitution, hunger, inequality, and discrimination.

To those seeking to eradicate sex work at whatever cost, I say first you must eradicate poverty, destitution, hunger, inequality, and discrimination.

Sex workers have no protections in their workplace, face police harassment, their access to the criminal justice system and to a fair trial are often denied and, as Laura Lee’s case outlined, their rights to privacy and freedom from discrimination are compromised. Migrant sex workers are often targeted ruthlessly by the police and the Home Office, their workplace raided under the guise of saving “victims” of human trafficking who are, in reality, usually arrested, detained and deported.

The issues faced by sex workers cut across many of key human rights issues, which is why so many international human rights organisations have taken a bold, evidence-based position in support of sex worker rights. It is not merely that the state doesn’t uphold and protect the rights of sex workers, it actively undermines them at every turn.

You can support the English Collective of Prostitutes’ petition for decriminalisation here. 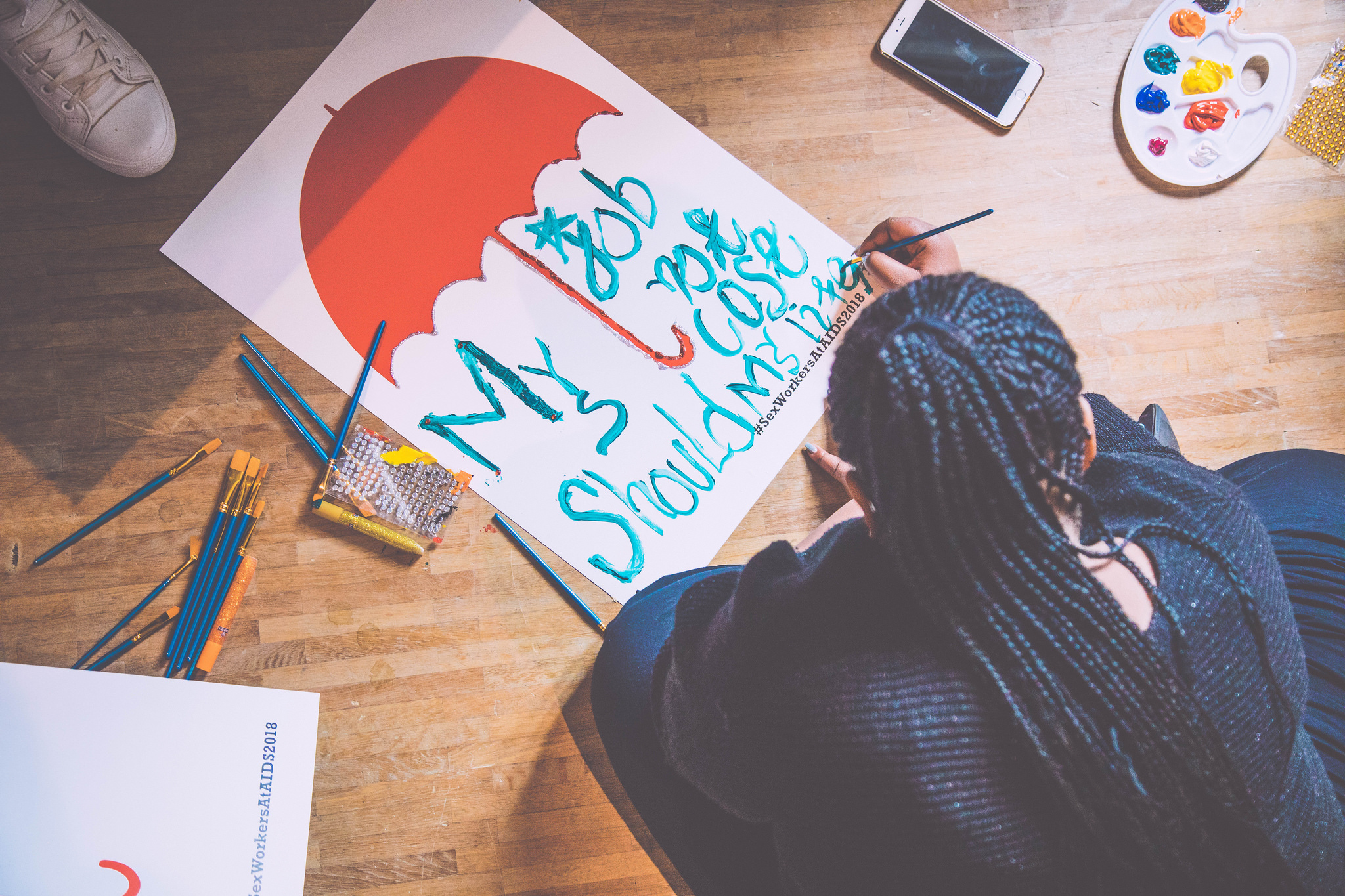 Sex Workers Are Being Denied Their Rights. It's Time To Respect Them.
Visions / 17 Mar 2022 Should Access To The Internet Be A Human Right?
Equality / 16 May 2022 What's New In Human Rights In Scotland? EachOther Is!
Disability / 13 May 2022 Repeat Safety Failures In A Mental Health Unit Contributed To A Man's Death
Discrimination / 12 May 2022 Homeless People Sleeping In Cars Or Tents Could Be 'Committing' A Criminal Offence
Institutions / 11 May 2022 The Government's Proposed Bill Of Rights Is A 'Power Grab'