Three universities are investigating how their adverts appeared on a Channel 4 documentary accused of “dehumanising” the Traveller community.

The University of Portsmouth, the Open University and St George’s, University of London, have each confirmed on social media that they are looking into how their adverts were broadcast during breaks on Dispatches’ ‘The Truth About Traveller Crime’ on the All 4 on demand service.

Charities and politicians have criticised the show for “sowing division” since it was first aired in April. Broadcasting regulator Ofcom launched an investigation into the show in May after receiving more than 800 complaints.

The 47-minute documentary set out to investigate crimes which it claimed were “linked to several Traveller communities” across England, including at sites in the East Midlands and Norfolk.

Channel 4 has previously defended the show as examining “an important issue which was addressed fairly, accurately, and with due impartiality in accordance with the Ofcom Broadcasting Code”.

As of Thursday (11 June), no adverts at all were being shown on All 4’s Dispatches episode of ‘The Truth About Traveller Crime‘. A Channel 4 spokesperson said that the adverts appeared due to a “programme categorisation error” and that it does not broadcast adverts on any Dispatches episodes so as to avoid “inappropriate juxtapositions”.

The universities were responding to a joint Twitter call by campaign group Stop Funding Hate and the Traveller Movement, the national Gypsy and Traveller charity. 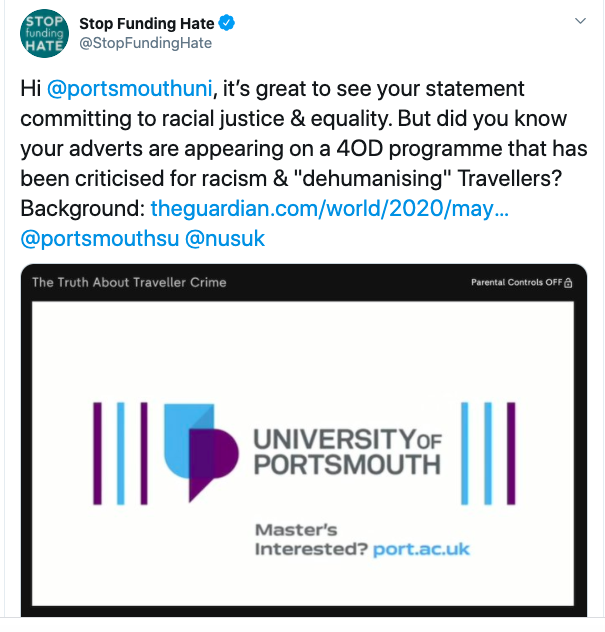 After being made aware that their adverts were being shown on the programme, the University of Portsmouth’s official Twitter account said: “We didn’t know and are working to fix this now.”

The Open University said on Twitter: “This content contradicts our values and we absolutely do not endorse it.

“We work rigorously to prevent instances like these, and we share your disappointment in seeing our ads positioned in this way.” 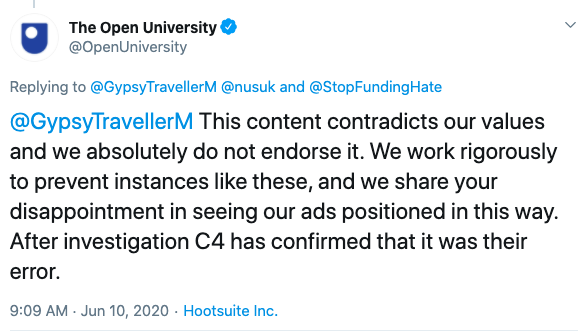 The Open University’s response to a joint campaign by Stop Funding Hate and the Traveller Movement. Credit: Twitter/OpenUniversity

A St George’s representative sent a message to Stop Funding Hate, saying that it was not involved in the funding of the programme and that it was “following up to request that it does not feature alongside the programme you have highlighted”.

Meanwhile, car company Hyundai have also pulled their adverts from the show.

Surely it’s time for @Channel4 to do the brave thing and publicly acknowledge that they got it wrong on this one? /2 #WeStandTogether https://t.co/s0rhmeMstA pic.twitter.com/TsCfWT4emV

Yvonne MacNamara, CEO of the Traveller Movement, welcomed the news that the three universities are reviewing how their adverts appear on the All 4 show.

“Clearly they were unaware their advert was used during a commercial break for Channel 4 programme, Dispatches – The Truth about Traveller Crime,” said MacNamara.

“This show dehumanised Travellers, led to a spike in online hate crime and depicted an entire ethnic group as criminals. We hope other advertisers will quickly follow suit and uphold their community values.”

The Traveller Movement has also filed a legal complaint over the way the show portrayed Irish Travellers and English Romani Gypsies.

Ofcom has confirmed that it is reviewing whether the Channel 4 show broke its rule. “We are investigating whether this programme breached our rules on harm and offence,” said an Ofcom spokesperson.

EachOther understands that Ofcom has received nearly 900 complaints over the Dispatches episode, alongside a petition with more than 7,000 signatures alleging that the programme discriminated against the Traveller community.

Ofcom’s code of conduct was drafted in light of the Human Rights Act. It prohibits “hate speech” which it defines as “all forms of expression which spread, incite, promote or justify hatred based on intolerance on the grounds of disability, ethnicity, gender, gender reassignment, nationality, race, religion, or sexual orientation”.

A Channel 4 spokesperson said: “To avoid inappropriate juxtapositions of advertising Channel 4 does not place commercial advertising around the investigative journalism strand, Dispatches on All 4.

“Due to a programme categorisation error some adverts appeared around one recent episode of the strand and were removed once the category was corrected.”

A national Gypsy and Traveller charity.

A social media campaign that works to persuade advertisers to "pull their support from publications that spread hate and division".