While leaders and delegates meet to determine the future of our planet behind closed doors at COP26, for many the real action is taking place outside – on the streets of Glasgow.

People from all over the world have come to take part in pop-up demos and rallies taking place outside of official proceedings as parks, galleries, pubs, community centres and derelict spaces have been turned into venues to host climate fringe events.

The biggest protest is planned for Saturday 6 November, dubbed the ‘Global Day of Action for Climate Justice’. Between 50,000 and 100,000 people are expected to march through Glasgow as simultaneous marches happen the world over. Climate activist Greta Thunberg, arguably the star of the show, has confirmed she’ll be joining young people on the Fridays For Future climate strike on Friday 5 November.

EachOther went to a demonstration organised by Extinction Rebellion (XR), held to call out ‘greenwashing’. XR accuse the corporate sponsors of COP26 of using their association with the conference as a PR trick to cover up environmentally destructive habits. 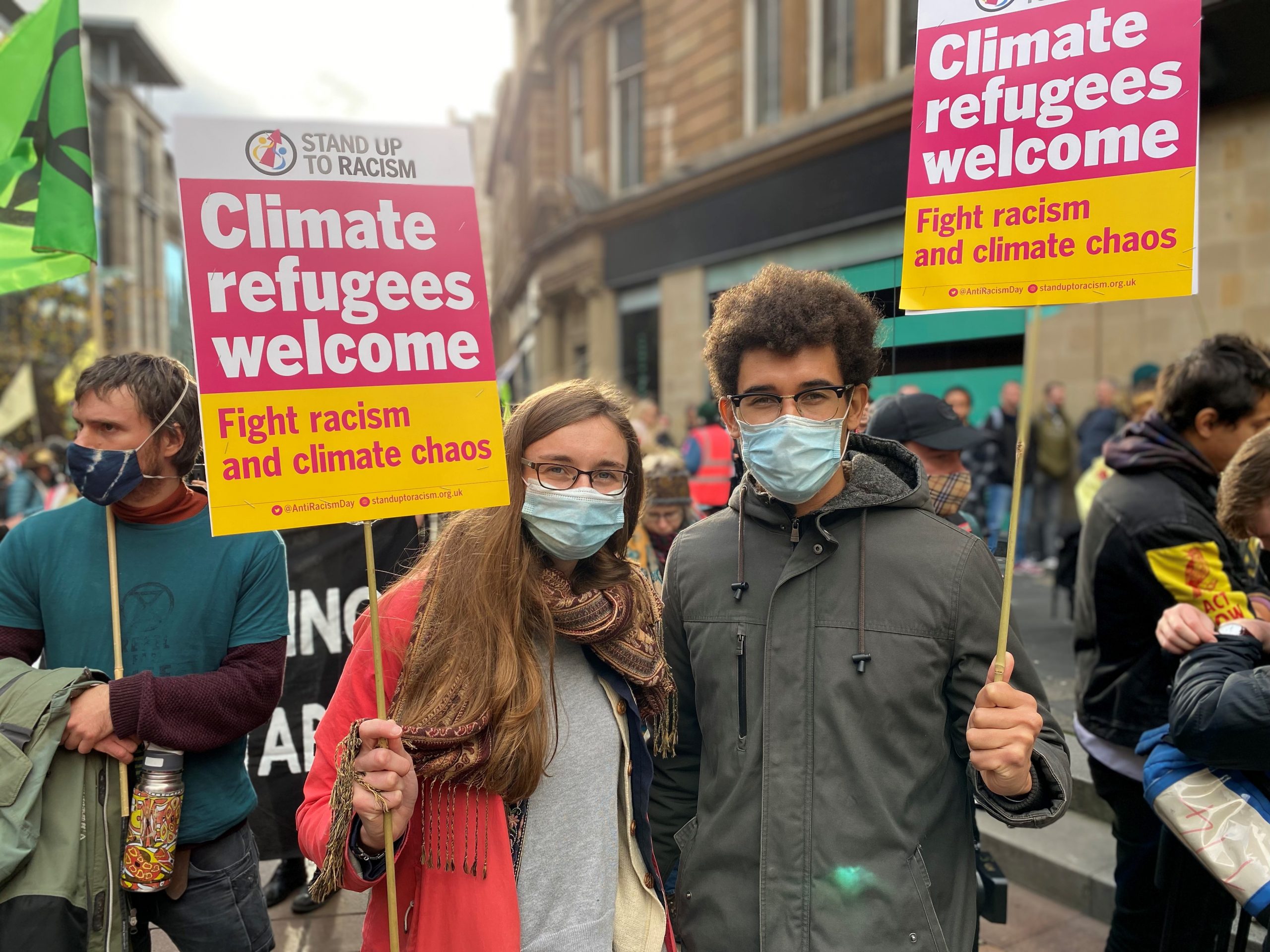 Joanna and Vladimir were both holding placards that read ‘Climate refugees welcome’. They said they had come on this march to show resistance to the official conference and to try to make leaders see that people want them to go further and accomplish more when it comes to addressing climate change.

Vladimir was visiting from Brazil and said he was happy to see so many people getting involved: “Countries like Brazil are the ones who stand to lose the most. It’s important that people stand up for real change. In Brazil we have a president who is one of the biggest enemies of climate change. He’s actively destroying the Amazon. Even among other leaders, he is a pariah.”

They weren’t optimistic about official outcomes, but Joanna said she was hopeful that the momentum might carry on after COP26 finished: “Maybe more people will realise that we can’t just think about it for two weeks and then forget about it until the next conference.” 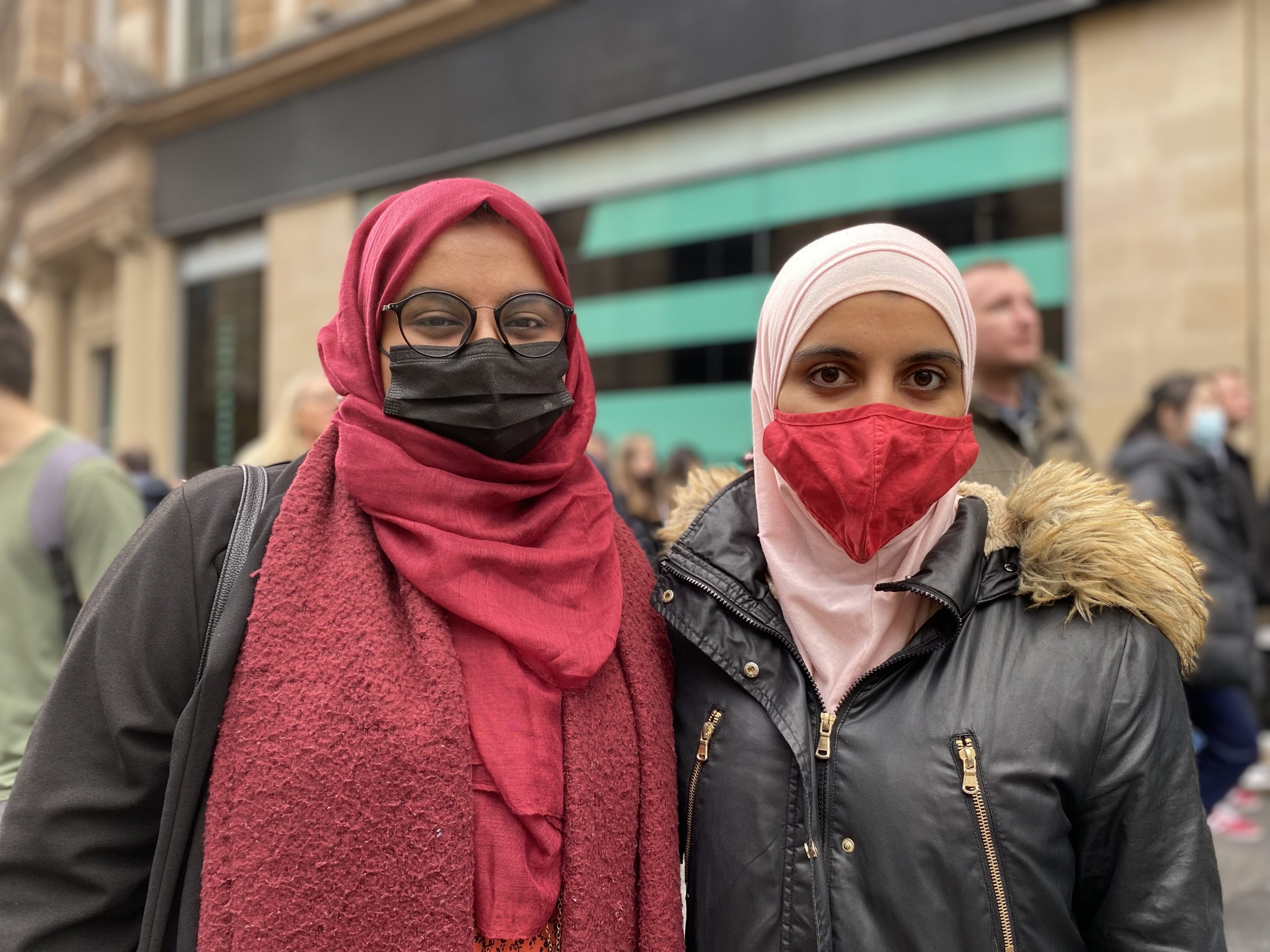 Sisters Yasmin and Tasnim from Glasgow had joined the protest because they wanted to make sure their voices were heard.

For Tasnim, there wasn’t an option of staying quiet any more, as she felt the need to speak up: “We need to stand up for what’s wrong and what’s right. It’s very important to say what we think and I encourage everyone to do the same.” 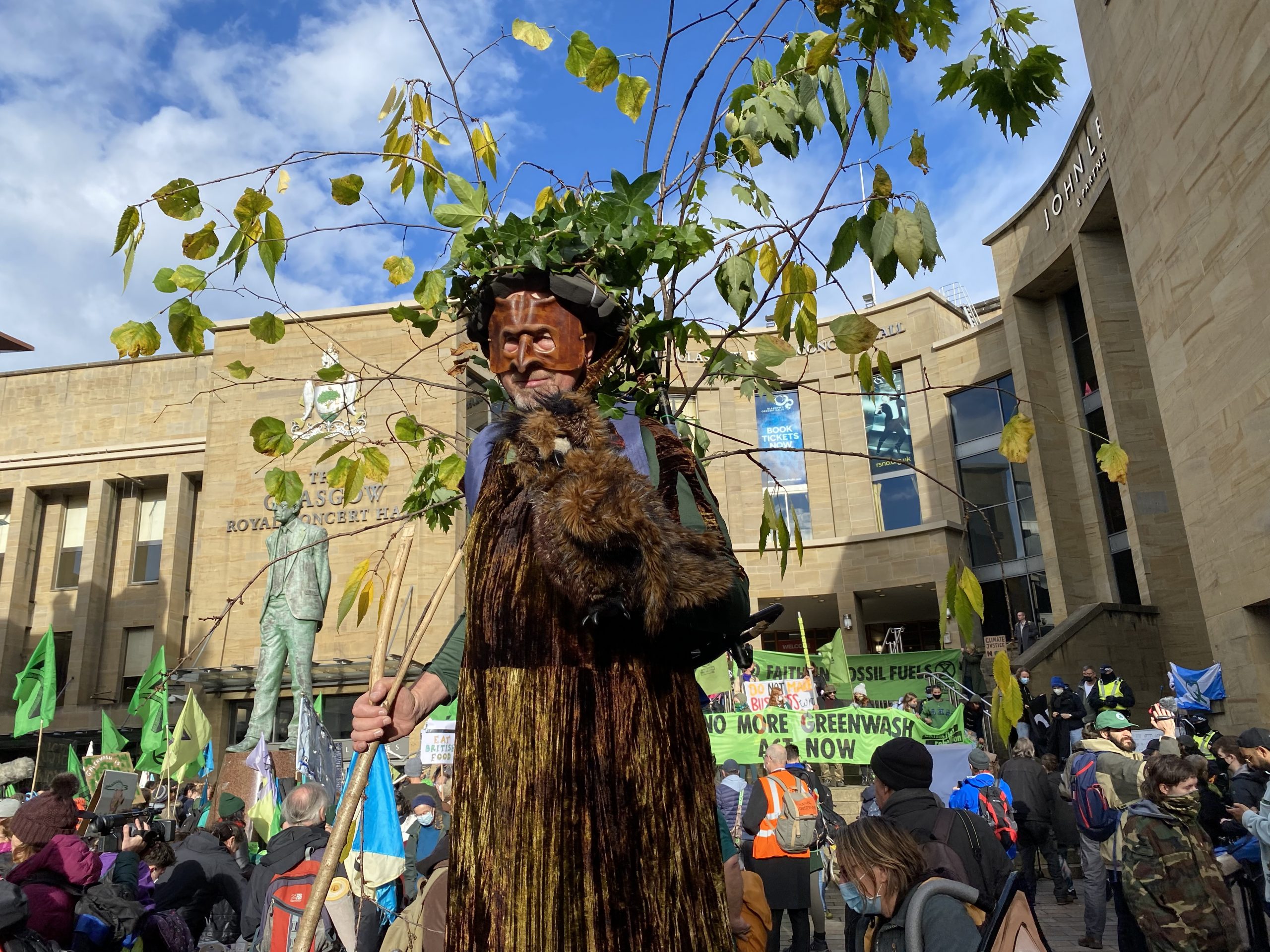 Towering over the crowds, dressed as a tree adorned with a headdress made from leafy branches while walking on stilts, was ‘Stumpy’ who said he came from the forest to call out greenwashing. “Look at BP. They call themselves ‘Beyond Petroleum’, but they’re still looking for petroleum, so it’s greenwashing when they say they are beyond it. If they keep doing what they’re doing, the trees will die, the birds will die, the bees will die and the people will die.”

While he pointed to the situation in Brazil and the damage inflicted by President Bosonaro  upon his ‘siblings’ in the Amazon, he also highlighted the attacks on trees in the UK. “The problem is that lots of the moorland used to be forests,” he said. “But because we decided we want to kill lots of grouse, we kill the forest.” 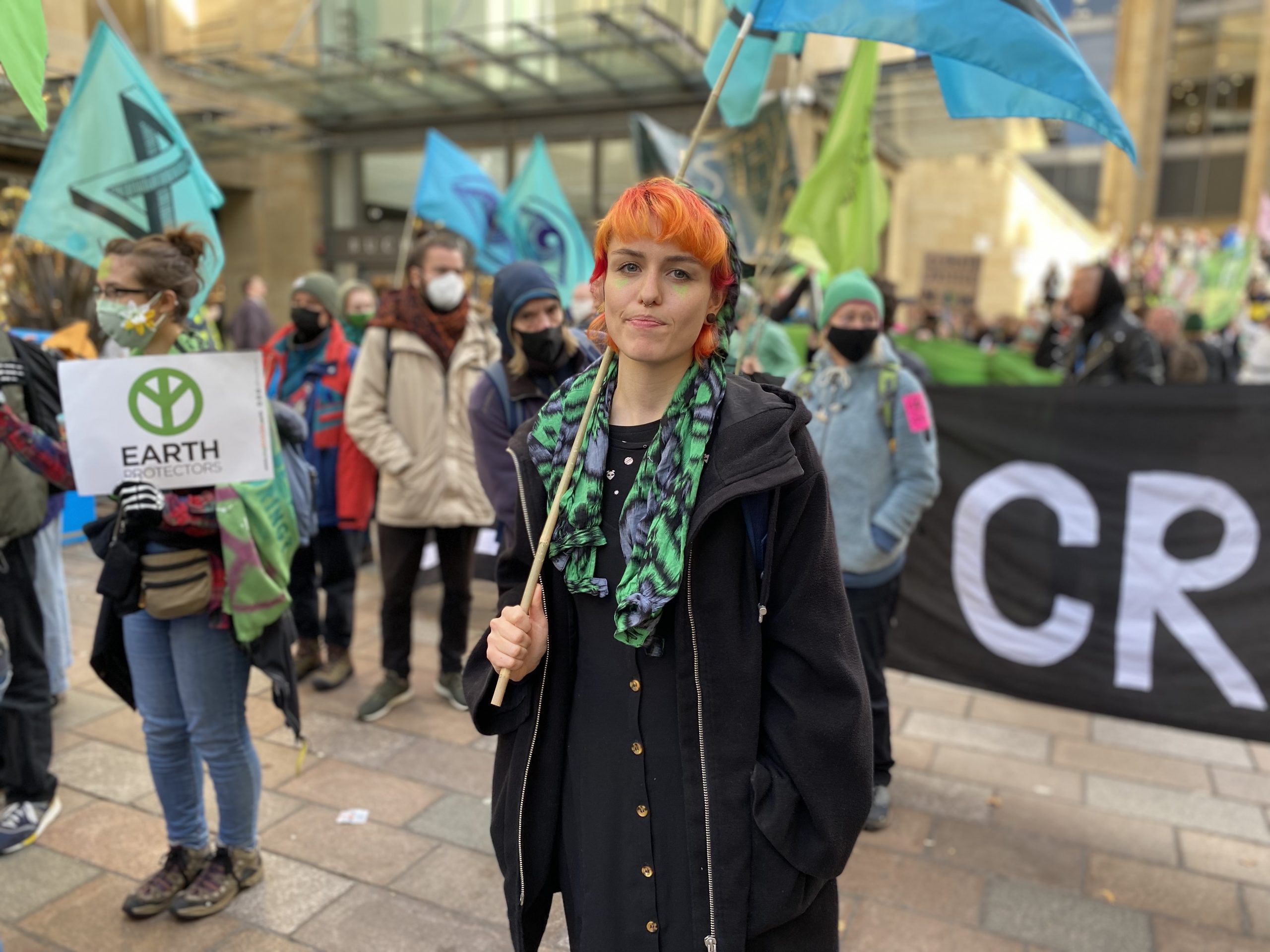 Reina had come for the duration of COP26 from the Netherlands, both as an activist and as a student. She is writing her thesis about skewed power relations in COP and how negotiators from African countries are disadvantaged when it comes to making their voices heard. Just the day before, she’d met a delegate from Malawi.

She thinks while there has been some progress, it’s not happening fast enough. “I heard that they will stop deforestation by 2030, but how many trees can you cut down in nine years?”, she said. “There’s a review of Nationally Determined Contributions, but we already know that they’re not sufficient to meet the required targets. This is really important, especially for small island states. If the temperature rise is not brought down, their countries will be underwater.” 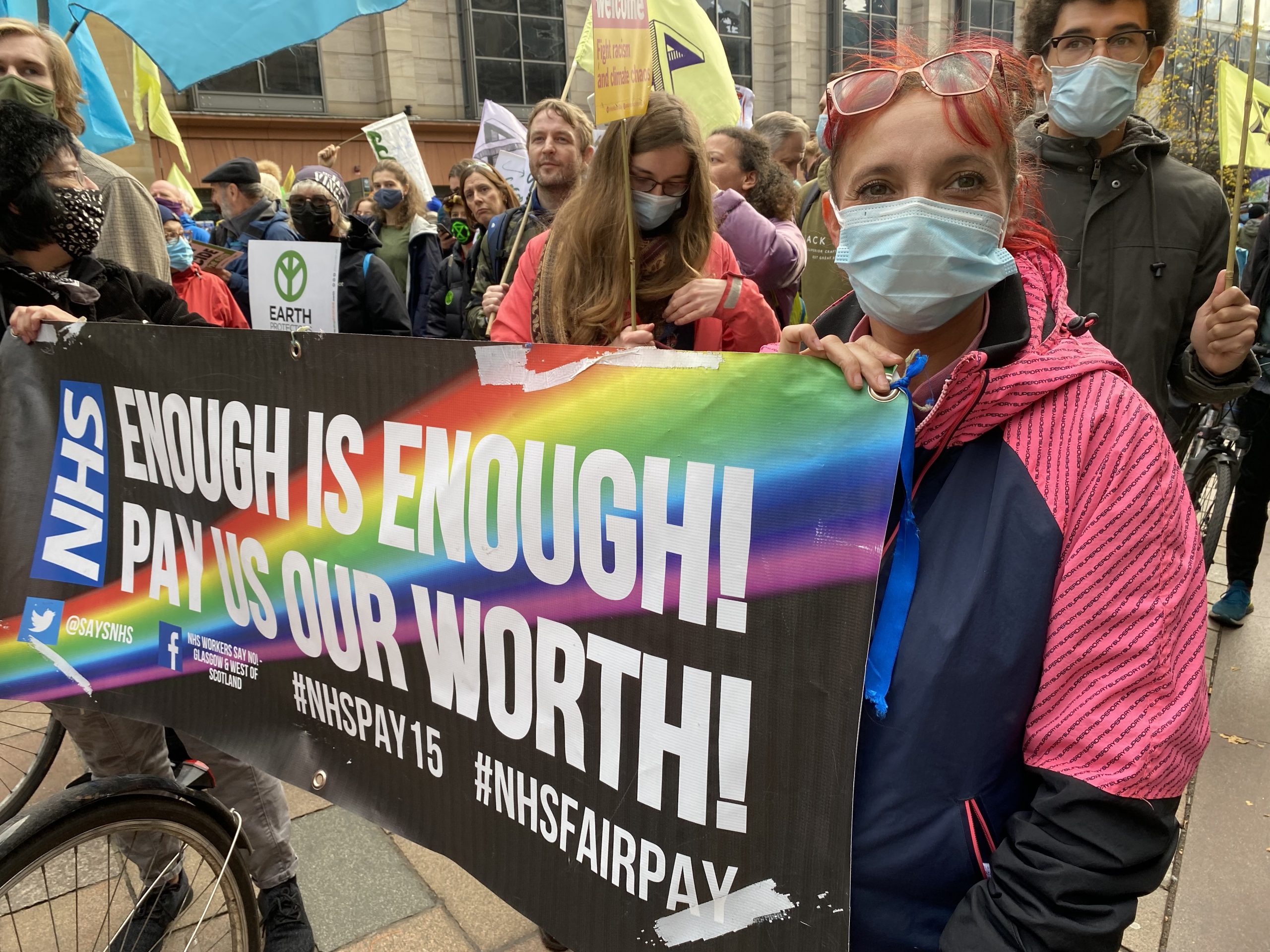 Fair Pay NHS members of the Glasgow and west of Scotland branch carried a rainbow-adorned banner which read ‘NHS: Enough is enough! Pay us our worth!’ 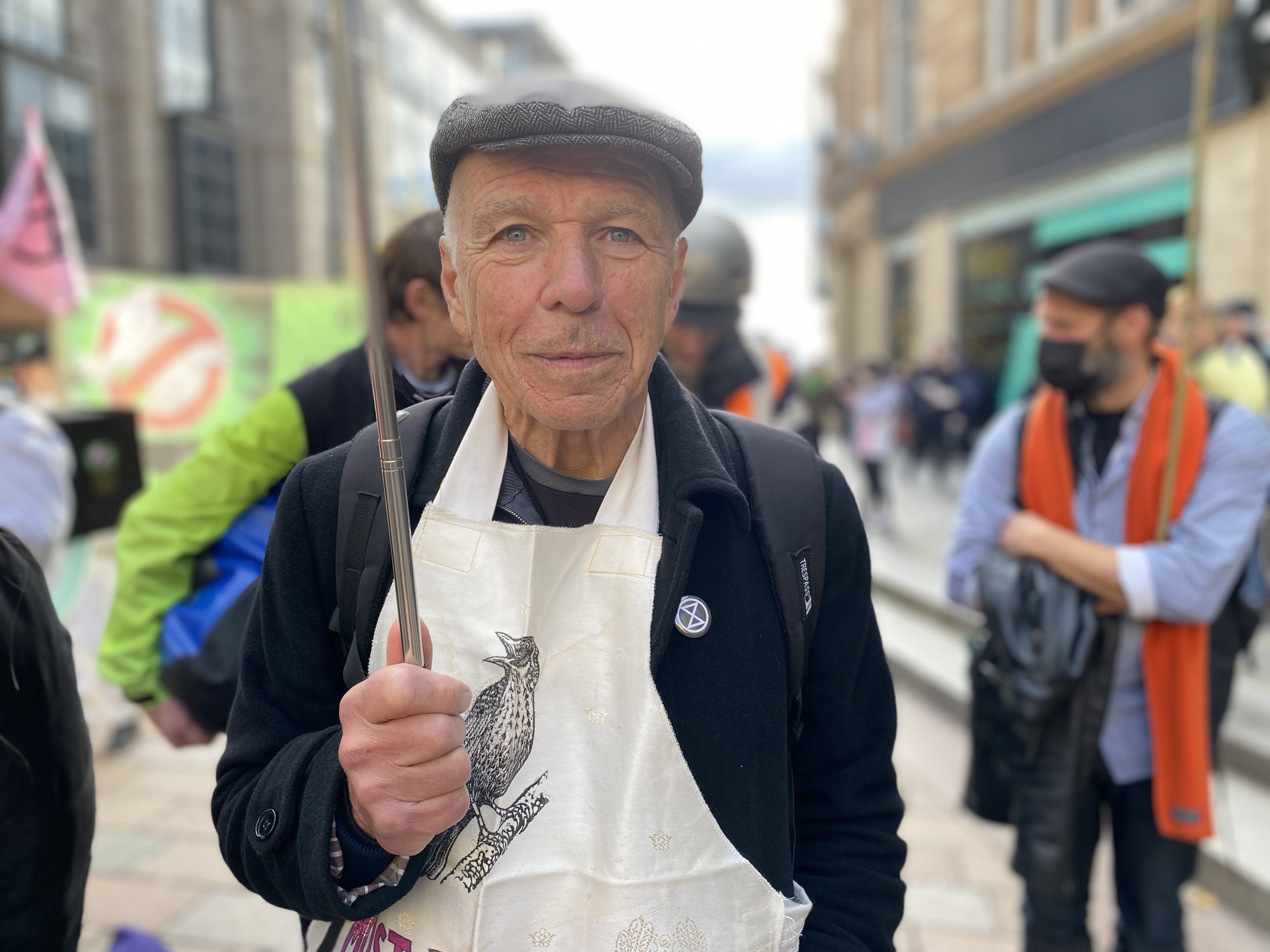 A group of protestors from Devon danced and whirled dressed as black birds. Following behind in a tabard which lamented the decline in insect numbers and the impact on bird life was John from Totnes.

He was there to lodge his objections to the COP26 processes. He said: “It’s all the ‘blah blah blah’ that Greta talks about and the real lack of action. The fact is we’ve had 25 COPs that ain’t worked. So I’m here to try and do my bit in terms of making a statement about that and to witness what is happening.”

Not considering himself a hopeful man, he did, however, see some positives. Namely, the beginnings of collaboration between countries around specific issues and the promise of finances to back them.

The real issue for John lay with the corporations who were hosting and financing the conference: “They’re out there with stands, trying to convince countries to continue to do business. I just think it’s a corrupt process. That kind of negligence is criminal and needs to be exposed.” 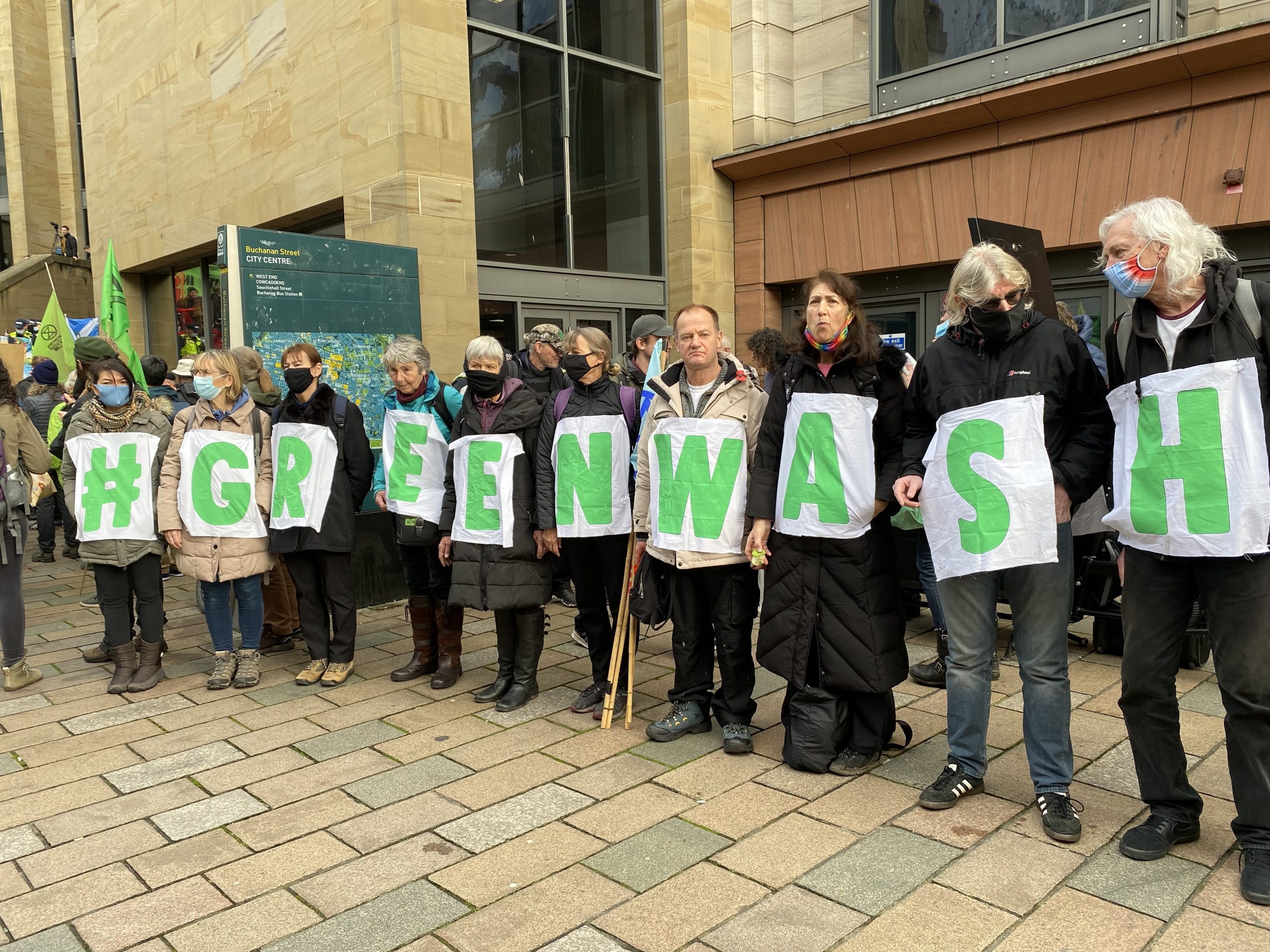 These protestors will have to wait and see what the recent announcement by the UN Human Rights Council of a new right to a safe, clean, healthy and sustainable environment will mean in practice. Meanwhile, in taking to the streets of Glasgow they are exercising their existing rights under Articles 9, 10 and 11 of the UK’s Human Rights Act to freedom of thought, expression and assembly. 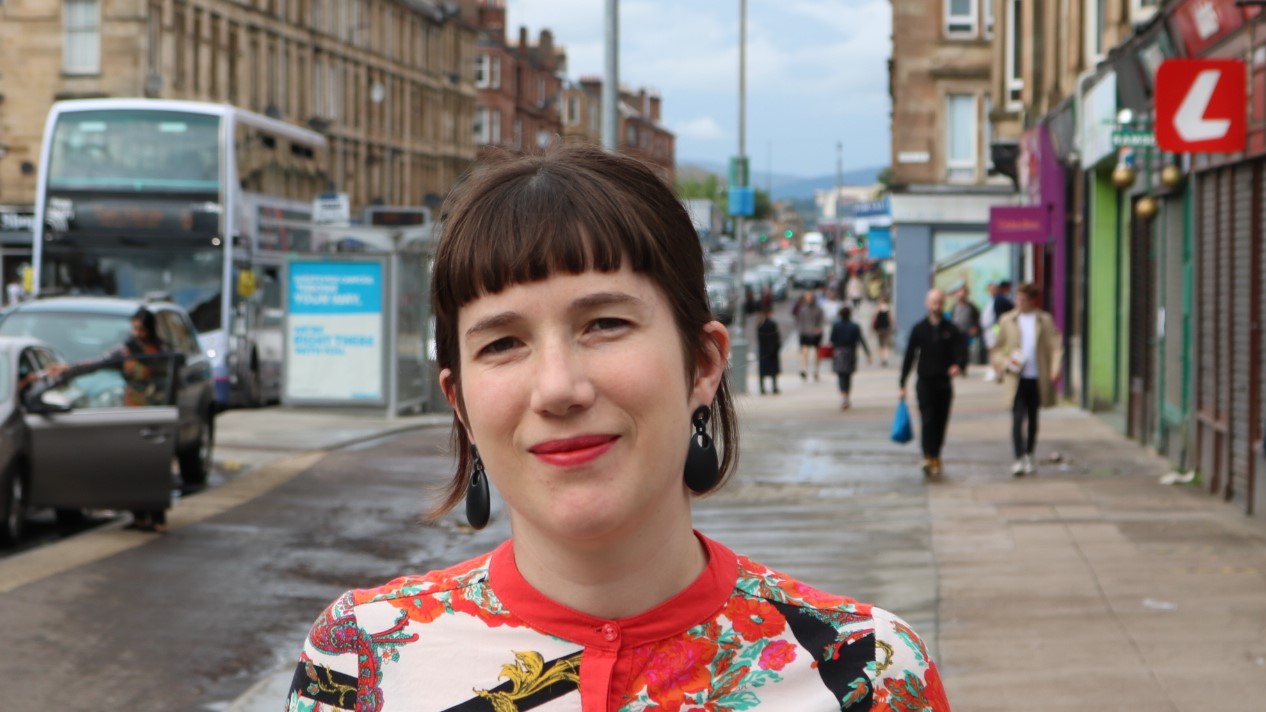 Rhiannon J Davies is the founder and editor of Greater Govanhill, a solutions-focused, multilingual community magazine which serves the Southside of Glasgow. She set up the magazine to provide a platform for typically under-represented voices, empowering people to tell their own stories in their own words. She’s interested in journalism that works with and for communities.

Rhiannon J Davies is the founder and editor of Greater Govanhill, a solutions-focused, multilingual community magazine which serves the Southside of Glasgow. She set up the magazine to provide a platform for typically under-represented voices, empowering people to tell their own stories in their own words. She’s interested in journalism that works with and for communities.