By The UK's First Abortion Clinic Protest Exclusion Zone is All About Women's Rights, 13 Apr 2018

Ealing Council in West London has become the first to ban protests within a 100-metre zone around a Marie Stopes abortion clinic. It could spark changes at other services across the country – but is there a conflict of rights?

A Catholic anti-abortion group called the Good Counsel Network has been regularly holding protests outside the clinic. They state that their aim is to attend “vigils” at abortion clinics and peacefully to approach women attending those clinics to try to persuade them to continue with their pregnancies.

However, clinic staff say that protesters have harassed and intimidated their patients, and Rupa Huq MP has likened their activity to “emotional blackmail”. Ealing Council voted to impose the “safe zone” using a Public Spaces Protection Order (PSPO) this week, which is essentially a tool local authorities can use to ban certain specified activities (or requiring certain activities to be done in a particular way) in a defined geographical area.

PSPOs can be used to target a wide variety of activities and groups – and can be quite controversial. For example, in 2015 Hackney Council was criticised for banning rough sleeping under a PSPO, effectively criminalising homelessness. The move was later dropped.

It is a very wide power allowing local authorities effectively to criminalise otherwise normal activities within certain areas. Anyone breaching a valid PSPO may be fined up to £1,000.

And What Exactly Has Gone On Here? The exact terms of the Ealing PSPO are not yet known, but the law requires that it should be carefully targeted to prevent or reduce the effect of activities which have a detrimental effect on the quality of life of the people in the area. In this case, the distress caused to women using the clinic. It’s also worth noting that Marie Stopes isn’t just an abortion provider – they also offer other counselling and contraception services to both men and women.

The targeted activities must have been, or be likely to be, persistent or continuing, and the restrictions must be justified by the actual or likely effect of the activities.

In this case, the Council considered that the protests around the entrances to the clinic were having a detrimental effect on women attending the clinic. It then had to consider whether the PSPO is a proportionate response to the behaviour it considers harmful, and decide on how restrictive to make it. The Council was concerned about women being targeted while going into the clinic and agreed to set up an alternative area near to the clinic where protesters can gather instead.

And What About Human Rights? If a local authority imposes a PSPO which does not meet the legal requirements, then a court would have the power to strike it down as ultra vires (i.e. beyond the local authority’s powers). Equally, a PSPO could also be declared by a court as incompatible with the Human Rights Act if its restrictions breached one of the Human Rights Convention rights.

Where the government restricts protest activity, there is a balance of rights to consider. Members of the Good Counsel Network have the right to manifest their religion, to express their views, and to assemble and associate peacefully, under Articles 9, 10, and 11 of the Human Rights Convention respectively.

However, these are qualified rights, and they can lawfully be restricted if it is necessary in a democratic society to protect public safety, public order, health, morals, or the rights and freedoms of others. For example, the health and the safety of the women attending the clinic.

The women who attend the clinic also have the right to protection of their private and family life under Article 8 of the Human Rights Convention, which is a broad right. It requires the government to protect people’s autonomy in all sorts of important ways, particularly where it concerns intimate aspects of people’s lives. It could be argued that government is obliged to take action to ensure that women are not deterred from accessing health care by limiting protest activity which targets prospective patients directly.

It is not yet clear whether the Good Counsel Network will try to challenge the PSPO. If it does, the competing rights will have to be examined carefully. 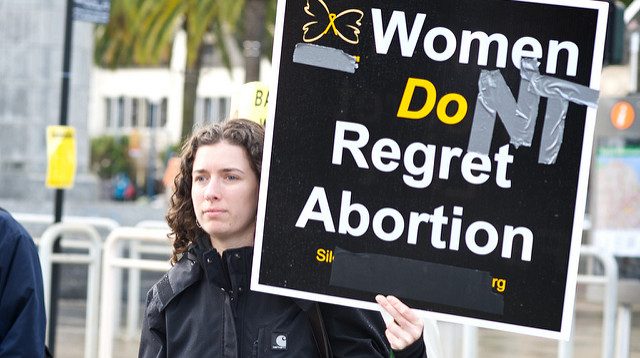 Ealing Council in West London has become the first to ban protests within a 100-metre zone around a Marie Stopes abortion clinic.

Ealing Council in West London has become the first to ban protests within a 100-metre zone around a Marie Stopes abortion clinic.