Today is the last day of the gradual release of our first ever comic strip, ‘Journeys Through Mental Health’. We started publishing it on Human Rights Day, back in December, and have slowly put out its panels over the holiday period. We issued it this way because we know it can be a difficult period for many people and we wanted to provide signposts to resources that might be useful at this time of year.

The project has been a long time in development – we were given funding for it back in the summer of 2020, in the early days of the pandemic, by the Lankelly Chase Foundation. With this new comic format, we wanted to explore human rights themes which lent themselves to hearing directly from people with lived experience – a key focus of our strategy as an organisation. This would also enable us to focus on telling human rights stories using illustration, rather than cameras, because we knew we were not going to be able to get out to film as readily under Covid lockdown conditions.

I had already worked with graphic novelists and artists on other projects (with Jules Schleeman and Jon Sack), but the funding from the Lankelly Chase Foundation gave me the opportunity to act upon an idea that I had long been developing, right from when I arrived at the organisation – comic strips. I have also long been an admirer of the organisation PositiveNegatives, who “produce literary comics, animations and podcasts about contemporary social and humanitarian issues”. They adapt personal testimonies alongside ethnographic research into art and illustration.

Comic strips have often been thought of as being for children or teenagers, rather than for adults. In the UK, there were comics like the Beano or Bunty, and, from the US, strips like 2000AD or Marvel. Superheroes are often what we think of, when we think about comics. I had grown up reading Charlie Brown and Calvin and Hobbes, both of which definitely touched upon adult narratives and themes, but it was when I was introduced to comics like Art Spiegelman’s Maus (which explored Spiegelman interviewing his father about his experiences as a survivor of the Holocaust) and Harvey Pekar’s ‘American Splendor’ (which looks at everyday people’s day-to-day experiences) that I was made aware of the kinds of storytelling opportunities that this form of art can offer.

So, comics have the capacity to reach different kinds of people with an accessible format that can absorb different kinds of stories. We wanted to use the format to cover stories about three human rights themes: young people and mental health; county lines drugs networks; and irregular economic migration. I started reaching out to new artists that I had not worked with before and asked people to recommend illustrators and graphic artists. An academic I know suggested talking to Sabba Khan. I was delighted to discover that Sabba was also a PostiveNegatives artist. In fact, that is how she thought I had discovered her.

Sabba felt drawn to the Young People and Mental Health theme. My sister is a Director at the mental health charity Richmond Fellowship and we had long talked about areas of overlap in our work. Here was the perfect project. Through the work of Recovery Focus, I was put in touch with a number of young people who were really keen to tell their own stories in order that they might help other people in similar situations.

Due to constraints imposed by the pandemic, the stories took a long time to come together. That was all right though, since it gave us time to develop the comic book idea; undertake the web development we needed to do to implement new functionality on our site; and allow the young people to feel comfortable with the project to which they were key. I will take forward much of what we learnt into the next comic we produce. 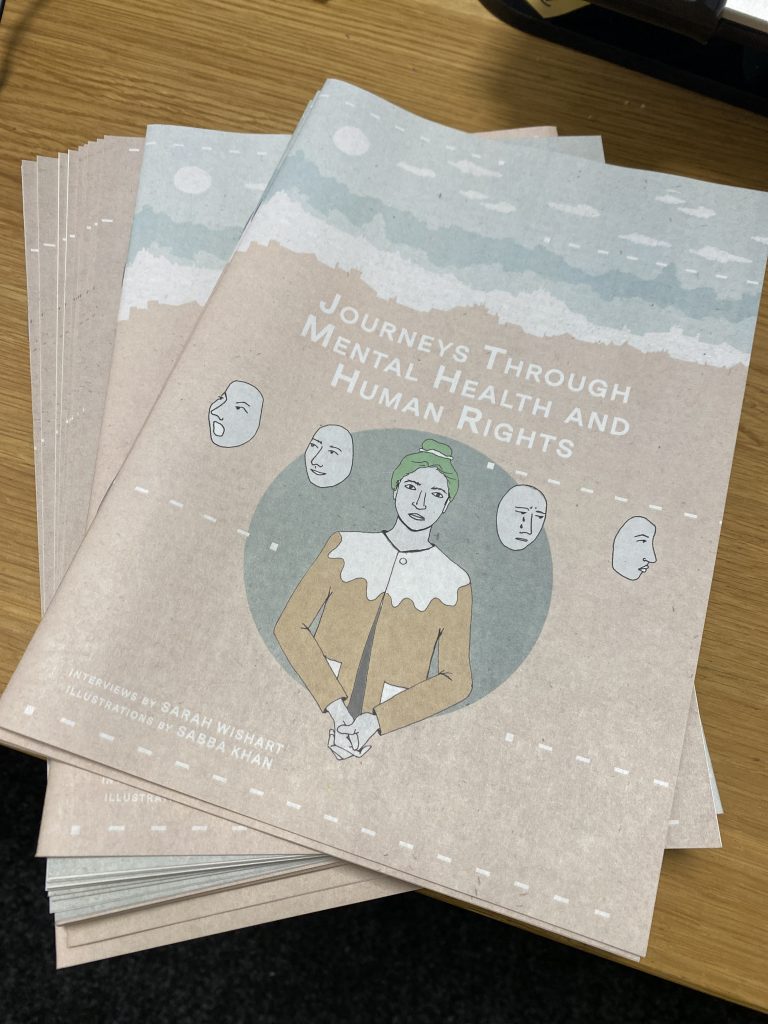 In this new year, I will be starting with one of the other two human rights themes we have identified and will be talking to charities working in the relevant areas about new conversations, identifying a range of people and new artists with whom to work. It has been so rewarding to be able to launch this comic strip over the holiday period, and to be able to reach new audiences with these stories. But, most of all, we are so proud to have been able to feature the stories of these brave young people who are working to make a difference in their lives and now also in the lives of others.