The 580-page report of the Independent Human Rights Act Review (IHRAR) provides the backdrop to a series of oral evidence sessions now being held by parliament’s Joint Committee on Human Rights (JCHR). In that report, both security services and human rights charities have issued warnings to the government over proposed changes to the Human Rights Act.

In December 2021, in the wake of the IHRAR report’s publication, the Ministry of Justice released a paper outlining the government’s proposals for changes to the Human Rights Act 1998 (HRA). The government is currently in a public consultation period on the proposed changes, which is set to close at 11:59pm on 8 March 2022.

Last week, the JCHR held its third oral evidence session, which called on witnesses to discuss the IHRAR and proposed changes to the HRA. EachOther attended it online.

There should not be different classes of humanity

Schona Jolly QC, a barrister from Cloisters Chambers, told the committee that there is a concern that changes to the HRA will exclude certain classes of people and will make human rights only attainable for some:

“I just wanted to give you the context, also, of classes of claimants that may then be deprived of damages. I act for a lot of prisoners, for example. And the idea that there’s a class or a category of person that’s undeserving, so that they they’re not entitled to damages, I think, just simply belittles the fact that if there is a breach, there’s a violation to their rights – it’s real. So, all I really wanted to say was that damages are already extremely low. They are, in general, extremely low in Human Rights Act claims. So, it’s not clear what’s intended. But what this does is it gives, it gives credence to this idea that the Bill of Rights is only for those deserving.”

One of the more controversial changes proposed is that ministers want to introduce a new legal test which would allow what the government says are “spurious” cases to be blocked before they make it to court.

The BBC reported that deputy prime minister, Dominic Raab, said the change would prevent what he called “abuse of the system” by criminals “relying on Article 8 – the right to a family life – to frustrate their deportation from this country”. According to Raab, such ‘abuse’ makes up approximately 70% of successful human rights challenges by foreign national offenders who appeal deportation orders.

The IHRAR rejected the idea of putting the government solely in charge of derogation orders under Section 14 of the HRA and Article 15 of the European Convention on Human Rights (ECHR), instead arguing that a role for the courts in assessing the validity of derogation decisions be retained.

Representatives from security services and intelligence agencies, including GCHQ, MI5 and MI6, have warned, as detailed on page 288 of the IHRAR report, that the government’s proposed changes in this regard could work contrary to the UK’s interests.

An analysis by the BBC’s home and legal correspondent, Dominic Casciani, suggests that these concerns have been described as ‘unintended consequences’. 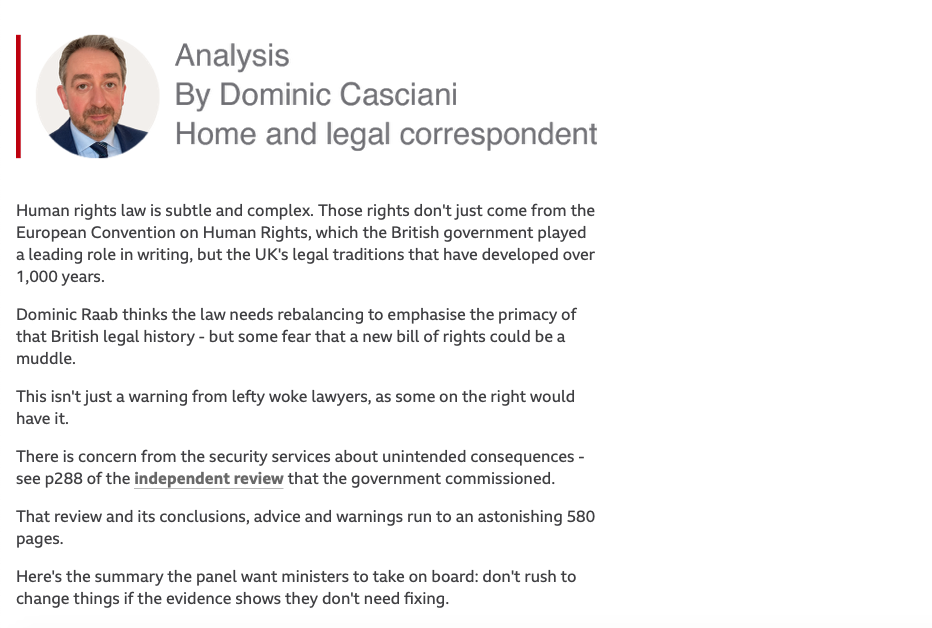 Jane Hutt, the Welsh Government’s Minister for Social Justice, issued a statement setting out the stance of the government in Wales, namely that people’s rights should not be diminished:

“The Human Rights Act sets out the fundamental rights and freedoms that everyone in the UK is entitled to. Under the latest proposals, a new Bill of Rights would not reflect some of the key principles and protections in the Human Rights Act.”

“We have been clear and consistent that we will not tolerate any dilution of rights and consider it essential that the United Kingdom remains a world leader. Safeguarding and advancing human rights remains our priority and we would strongly object to any proposals that threaten that.”

Charities and campaigners for human rights argue that the proposed changes are part of a wider effort by the government to reduce its accountability, not just in the courts through reforms to the HRA and Judicial Review, but at the ballot box through the introduction of compulsory Voter ID and on the streets by bringing in further curbs on the right to protest.

“This plan to reform the Human Rights Act is a blatant, unashamed power grab from a Government that wants to put themselves above the law. They are quite literally rewriting the rules in their favour so they become untouchable.”

“This reform is a threat to how and when we can challenge those in power – including stripping some people’s rights away and requiring everyone to get permission from a judge before they can take the state to court. Whatever you think of this Government, they must respect the rule of law. This change will mean future Governments, of all political leanings, will be beyond the reach of public accountability.”

The government, however, appears determined to press ahead with ringing significant changes to the UK’s legal architecture in relation to human rights. Leading members of the cabinet, having long coveted the opportunity, seem unlikely now to let it pass without a fight.

In a press release, the JCHR characterised the government’s position:

“The government is currently consulting on proposed reforms to the Human Rights Act. Among the options under consideration are changes to how UK courts can deal with legislation which is incompatible with human rights and restrictions on when a victim of a human rights violation can bring a case. The Government is also considering including the right to jury trial in a Bill of Rights, strengthening the right to freedom of expression as compared to other rights, and further restricting the rights of foreign national offenders and asylum seekers facing deportation.”

The future of the UK’s Human Rights Act will remain a hot topic in the months ahead. We will continue to keep you posted, covering relevant developments in parliament and elsewhere.

In the run-up to the end of the government’s consultation on the changes it is proposing to the Human Rights Act, EachOther will be running a week of dedicated coverage on the HRA, starting on 28 February. Stay informed by visiting our website that week and follow us on social media at @EachOtherUK.