Priti Patel is facing calls to apologise from charities, MPs and campaigners who accuse her of espousing hate speech against Travellers.

The complaint stems from comments the home secretary made during an online event last week in which she spoke of “criminality and violence taking place” in Traveller communities on “unauthorised encampments”.

In an open letter penned by Pauline Anderson OBE, chair of the Traveller Movement charity, Patel’s remarks are described as “completely unacceptable and discriminatory in the extreme”.

“We consider your comments during this meeting to constitute hate speech as it brands an entire ethnic group as criminal and violent,” the letter says.

“You have a duty as a public figure to eliminate unlawful discrimination, advance equality of opportunity and encourage good relations between all groups.

“Your comments not only pit ethnic groups against one another, they also single out an entire ethnic group as criminal and violent.

“As you will be aware, Gypsies, Roma and Travellers experience some of the highest levels of discrimination, hate and hostility of all ethnic groups.”

The 2010 Equality Act outlaws discrimination, harassment and other proscribed conduct towards people on the basis of “protected characteristics” – aspects of a person’s identity considered to make them who they are.

There are nine protected characteristics – among them is age, race, ethnicity and sexual orientation.

Romany Gypsies, Scottish Travellers and Irish Travellers have been declared by the courts to be protected from race discrimination under the Equality Act 2010.

Towards the end of an online ‘Conversation with the Home Secretary‘ event last Tuesday, hosted by the Board of Deputies of British Jews, chief executive Gillian Merron asked Patel what the government is doing to support “marginalised” Roma, Gypsy and Traveller communities.

She referred to a Home Office consultation launched last year on whether to make “unauthorised encampments” a criminal offence, to which the Board of Deputies had responded “expressing anxiety”. 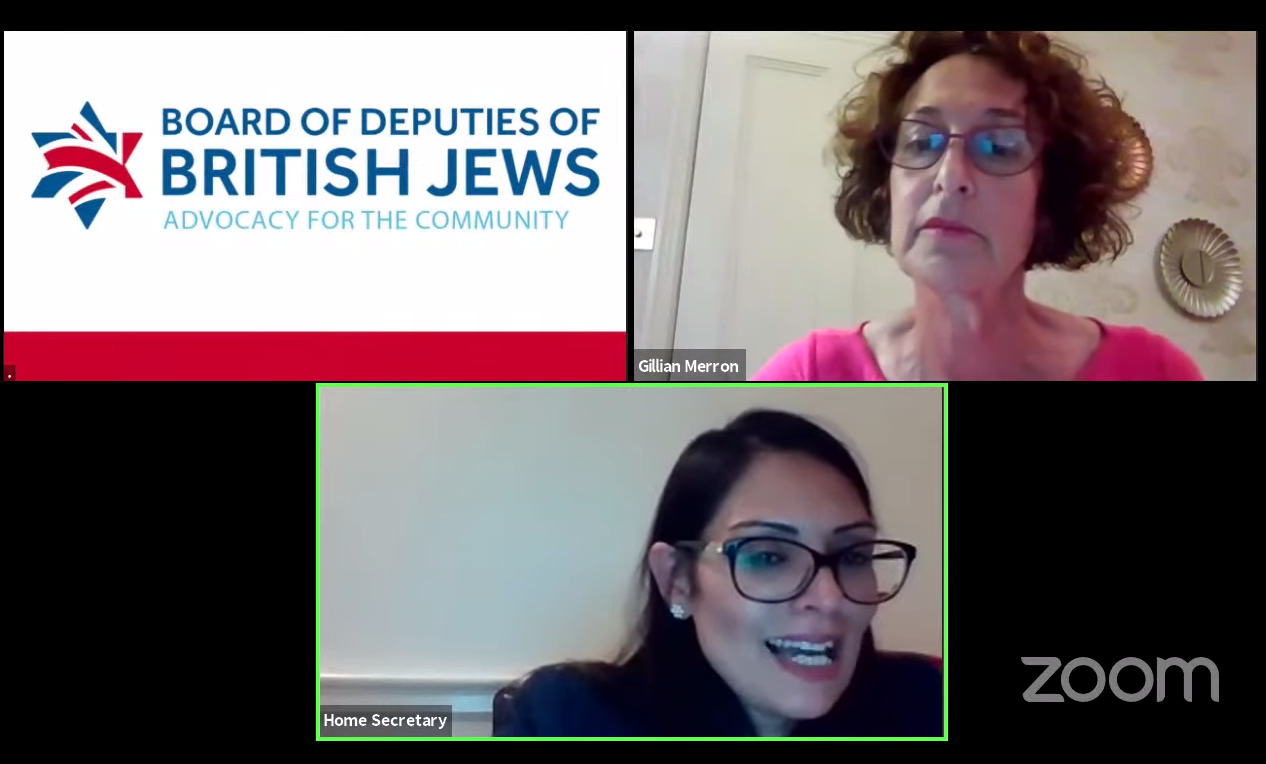 Priti Patel speaks at an online event hosted by the Board of Deputies of British Jews. Credit: YouTube

Responding, Patel said the issue of Traveller sites sits with “planning policy and planning regulations” – the remit of the Ministry of Housing, Communities and Local Government – as well as the local development frameworks of local authorities.

She continued: “The Home Office’s work in this particular area actually refers to some of the criminality that takes place and that has happened through Traveller communities and unauthorised encampments.

The home secretary begins to refer to one example of “where [the Home Office] have seen criminality and violence taking place” before hesitating and saying she “can’t go into the details”.

“But basically we saw a police officer that was ‘effectively murdered’ through a robbery that took place by a Traveller family,’” she continues.

The Traveller Movement’s open letter – whose signatories include Labour’s former shadow chancellor John McDonnell – calls “for an immediate retraction of these comments, and a public apology made directly to all Traveller, Gypsy and Roma people”.

A Jewish campaigner who spoke to the Travellers Times believes the home secretary was referring to the death of police officer Andrew Harper, 28, in August last year.

Jessie Cole, Albert Bowers and Henry Long were convicted of manslaughter and sentenced to 42 years in July this year. All three have lodged appeals against their sentences, with Bowers and Cole also seeking to appeal their convictions.

The killers’ heritage is unclear, with the Guardian reporting that two came from English Romani backgrounds and the background of the third being unknown.

The Travellers Times reports that none of the three men are Irish Travellers or have connections to “unauthorised sites”.

Long was arrested at a Berkshire site where English Romanies and Irish Travellers live alongside each other.

Speaking after the killers’ sentencing, a senior police officer warned that the UK travelling community must not be demonised amid critical media reports.

“There is no evidence to suggest we have a disproportionately high crime rate around Traveller sites,” Janette McCormick, deputy chief constable at the College of Policing told the Guardian.

In 2012, the European Council’s human rights commissioner highlighted how “anti-Gypsy stereotypes [also] continue to be spread and perpetuated in the media across Europe … reporting on Roma and Travellers only in the context of social problems and crime.”

Clauses on discrimination in ethical codes set out by the UK’s two main media industry regulators – Ipso and Impress – both state that journalists should not include details of person’s race in stories unless genuinely relevant.