Migrants Organise: The Struggle For Just Immigration Is Everybody’s Fight

By Migrants Organise: The Struggle For Just Immigration Is Everybody’s Fight, 30 Apr 2019

Migrants Organise provides a space for migrants and refugees to work together, develop leadership, speak out and organise for dignity and justice.

Our work emerged out of the lived experience of many migrants and refugees who were increasingly excluded, marginalized, discriminated against and denied access to justice.

Our communities needed to push back against an increased hostility in public discourse, now translated into a set of policies known as the “hostile environment”.

Although it is a part of a longer colonial legacy, the accelerated erosion of rights and entitlements for various groups of immigrants started 20 years ago, and came as a response to the increased number of refugees generated by the wars of the 1990s.

It then transitioned into xenophobia in response to the EU enlargement and an increased number of EU migrants from new accession states.

It culminated in today’s discourse around migration in relation to Brexit and the “hostile environment”, of which the Windrush Scandal is the most prominent example.

The injustices of our current immigration system are at the centre of struggles against economic injustice, against racism and to uphold the basic system of rights that have been won in this country.

In the past 25 years, our work has been to respond to these increasing restrictions of rights for various groups of migrants and refugees.

The precursor of the current “hostile environment” policies lie in the decisions in the 1990s to deny asylum seekers the right to work and to claim welfare benefits.

The government also decided in 1996 that it would no longer hold the budget for support of asylum seekers centrally, and that local authorities where asylum seekers reside would bear the costs of their resettlement.

This lead to vulnerable people were dispersed around the country with no say or choice about the destination.

The aim of these measures was to reduce the so-called ‘pull factors’ that successive governments imagine are the reasons why people come to the UK.

The actual result of these policies is destitution and dehumanisation of vulnerable people, many of whom are traumatised as a result of torture or trafficking. In response to these policies, ten years ago Migrants Organise launched our Community Programme – a combination of mentoring, advice and educational and other activities where people stuck in the bureaucratic system can get support, build community and make friends.

The Community Programme is also a space for people from all walks of life to volunteer and support inclusion and welcome in a meaningful way.

Every year, more than one hundred volunteers mentor, advise, teach, organise and campaign with migrants and refugees through our organisation.

Since the inception of the “hostile environment” there has been a manifold increase in the problems our work sought to address.

Migrant organisations up and down the country report the same thing: a doubling, tripling of the amount of casework support needed by our communities – and with no end in sight.

When the story is told of how human rights were stripped from British citizens, it will begin by documenting the steady exclusion and dehumanisation of asylum seekers, refugees and migrants.

As it stands, the broken immigration system leaves hundreds of thousands of people completely stuck, with no way towards normalisation of their status, and thus left out of the framework of human rights altogether.

When the story is told of how human rights were stripped from British citizens, it will begin by documenting the steady exclusion and dehumanisation of asylum seekers, refugees and migrants.

That migration is the modern testing ground for reactionary politics can also be seen in the overlapping agendas of the “hostile environment” and neoliberal austerity.

Nowhere is this clearer than in health, where Government legislation demanding migrants pay upfront for care has created a charging regime in the National Health Service (NHS). This charging system can, at any time, be expanded to the general population, and initiate the move towards a privatised healthcare on a US model. The lessons from this are twofold. Firstly, that there is a desperate need for a migrant movement in the UK to work for systemic change that reverses recent legislation and moves the country towards an immigration system based on universal human rights and the principles of fairness, justice and dignity.

The “hostile environment” shows us that rights can be taken away, but they can’t be given back, they must be won, and this is why we organise.

Secondly, the struggle for a just immigration system is everybody’s fight.

The injustices of our current immigration system are at the centre of struggles against economic injustice, against racism and to uphold the basic system of rights that have been won in this country.

This is why hundreds of campaigners, healthcare workers and migrants will be meeting in London on Tuesday 30 April to say that only together can we successfully defeat the “hostile environment” and defend the principles of a democratic society.

Comment piece by Zrinka Bralo, the CEO of Migrants Organise 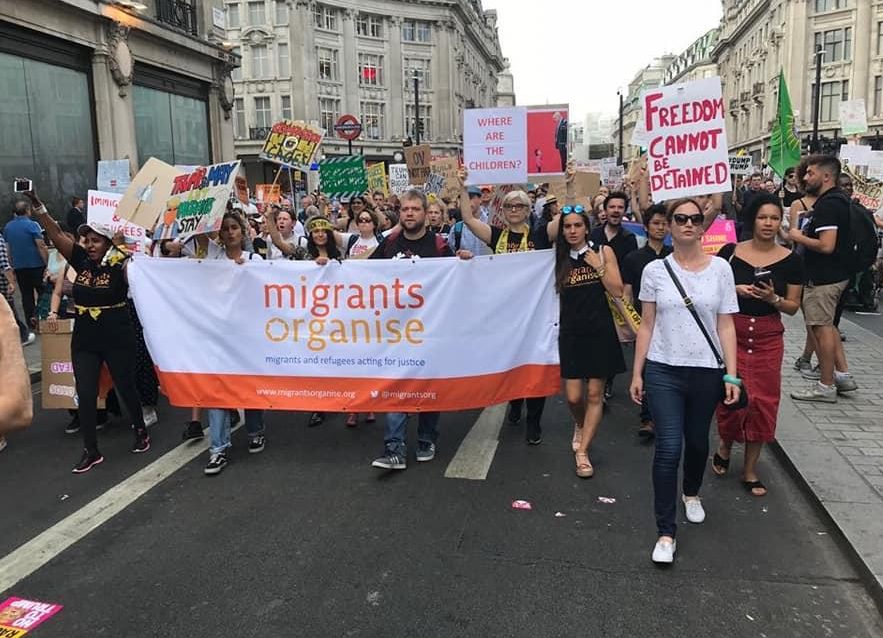