‘Being Intersex Can Be Beautiful’: It Shouldn’t Deny You Making Choices About Your Body

By 'Being Intersex Can Be Beautiful': It Shouldn't Deny You Making Choices About Your Body, 11 Dec 2018

Anick was 21 before he was first told the word intersex, after going through decades of medical interventions and surgeries. Speaking to RightsInfo following the launch of his new Radio 1 documentary The Intersex Diaries, he shares his journey and the human rights violations which urgently need addressing.

As a child, Anick found himself experiencing multiple surgeries, the first when he was just four months old, and hormone treatments, and was determined to hide them. He lived with constant pain, depression and anxiety, and dealt with suicidal thoughts.

Anick tells RightsInfo: “I grew up knowing that I was different, and I was convinced that I was the only person in the world with a body like mine. I was made to feel that surgery was the only solution to cover up the fact that my body does not look like other boys or other girls.”

It was only when Anick was 21 that the word, ‘intersex’, was mentioned to him by a doctor and changed his perspective. Anick has undergone numerous operations and hormone treatments as a child because he was born intersex. The first was when he was four months old.  Image Credit: Anick

Intersex is a broad term used to describe people that fall outside of the traditional biological concepts of what we know about male and female bodies. Intersex variations can affect chromosome patterns and hormones, as well as internal and external genitalia, and occur naturally in about 1.7 per cent of the population – about the same amount of people who are born with red hair.

“Having the word made me feel like I was part of something – unlike being a lonely medical marvel or anomaly,” Anick says.

Morgan Carpenter is co-executive director of Intersex Human Rights Australia, a national intersex-led organisation that promotes the human rights of intersex people in the country.

Carpenter’s experiences echo Anick’s: “Often knowledge about being intersex is withheld. In my case, it was a clinical psychotherapist that gave me the word, well after a series of surgeries that I went through without any access to peer support, and with very limited information on their consequences. Those surgeries left me with depression, as well as physical health issues.”

Carpenter added: “Finding the word can help us make more informed choices about our bodies, and construct affirmative ways of understanding ourselves.” For Anick, now aged 23, the decision to continue with major reconstructive genital surgery was simple due to his negative body image. He knew that surgery was the only step available to help him – the alternative was to take his own life.

It showed Anick preparing for his final surgery and visiting the Organisation Intersex International (OII) Conference in Copenhagen, where, among intersex peers, he questioned the surgeries he underwent as a child.

I started to question if many of my surgeries were actually medically necessary.

“I learnt that intersex issues are very similar around the world. We all face unwanted, or degrading medical treatment, as well as a lack of clarity on our legal status, or protection and right to know about our bodies,” Anick told RightsInfo.

“I started to question if many of my surgeries were actually medically necessary, and if consent was ever provided by parents, who essentially just followed doctors’ suggestions,” explains Anick.

Carpenter – who is a signatory of the Yogyakarta Principles plus 10, a set of principles applying international human rights law to sexual orientation, gender identity, gender expression and sex characteristics – believes “there are specific human rights violations that happen to intersex people”.

“They’re born with sex characteristics that don’t fit medical, and often social, norms for female or male bodies. In some parts of the world, infanticide and abandonment of intersex infants may occur,” explains Carpenter.

“In places where western medicine is accessible, our right to bodily integrity can be violated by harmful practices that seek to make our bodies more typically female or male. For example, a 2016 Family Court case in Australia described how clitorectomy and labioplasty on a three-year-old enhanced the appearance of her female genitalia.”

Article 14 of the Human Rights Convention, protection from discrimination, states that all humans should have the same rights regardless of their sex.

Yet for intersex people, their bodily autonomy is often compromised for cosmetic reasons, before individuals are old enough to express their own agency and consent. This originates from stigmatisation and discrimination which regards intersex bodies as problematic. Anick and Intersex Advocates and Friends at Pride in London this year          Credit: Anick

Anick now campaigns for intersex acceptance through his organisation Intersex Advocates and Friends, and organised the first intersex march at Pride in London this year.

“I want intersex to be part of daily life for everyone, as it is for me,” he explains.

However, there is some way to go to enact legal reforms and self-determination, as Carpenter explains: “The UN Treaty Bodies, and the Office of the High Commissioner for Human Rights, have made powerful statements recognising our rights to bodily integrity, but UN member states have made little progress ensuring that those rights are actually recognised.”

The intersex population is diverse; many identify with their sex assigned at birth, and are heterosexual, whilst others are not. In defying sex and gender norms, the intersex community has much in common with the LGBT+ movement – yet this can result in focusing on identity issues, as opposed to unique human rights violations.

Intersex has always, and will always, exist. Intersex is not a shameful word, and being intersex can be beautiful.

In countries such as Australia, the intersex movement is closely allied with disability rights, and the tackling of forced treatment and sterilisation.

Malta is the first country to protect children born with variations of sex characteristics from forced and coercive interventions, through the 2013 Malta Declaration.

In the UK the government is launching a consultation next year into the treatment, rights and experiences of intersex people, in response to how sex diversity issues are treated in the medical profession, and concerns around surgery on infants, when there is not a clinical need.

As Anick says: “A lot of people, even within the LGBTQ+ community, have no idea what intersex means. But intersex has always, and will always, exist. Intersex is not a shameful word, and being intersex can be beautiful.”

If you’re struggling with any of the issues raised in this piece, you can receive confidential support from The Samaritans. 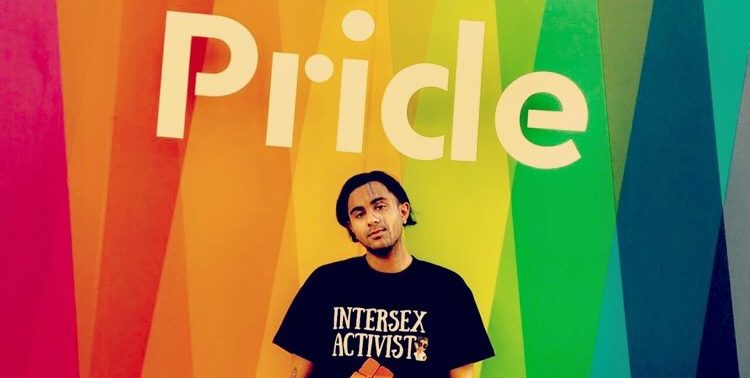 'Being Intersex Can Be Beautiful': It Shouldn't Deny You Making Choices About Your Body

Anick lived with constant pain, depression and anxiety, before discovering that he was intersex. He shares his journey with us, and in a new documentary film.

Anick lived with constant pain, depression and anxiety, before discovering that he was intersex. He shares his journey with us, and in a new documentary film.