A young campaigner is facing imprisonment for the alleged breach of an anti-trespass injunction while protesting against the felling of ancient woodland in Warwickshire to make way for the government’s HS2 project.

Elliott Cuciurean, 22, could be imprisoned for his role in protesting against the building of the high speed railway, HS2, which will link London, Birmingham, Manchester and Leeds upon completion.

Human rights lawyers have raised concerns over the case as it is believed to mark the first time that HS2 Ltd, a government-funded company, has threatened imprisonment by applying for committal of a protester rather than following the usual criminal law system, which would normally result in a fine.

Cuciurean allegedly entered injuncted land at Crackley Wood, Warwickshire, where ancient woodland was being chopped down to make way for HS2.

HS2 Ltd has applied to the courts to put in place various injunctions to stop protestors from entering land that it legally possesses.

In a press release, Robert Lizar solicitors, representing Cuciurean, criticised the “aggressive and extreme” step taken by HS2 Ltd, which it said “smacks of desperation as public opinion mounts against the project”.

Cuciurean is in the midst of a two-day committal hearing at Birmingham High Court, pursued by the Secretary of State for Transport and HS2 Ltd. The hearing is set to conclude on 31 July.

A number of leading environmental and wildlife organisations have opposed HS2, including the Woodland Trust and RSPB.

The Woodland Trust has said that 108 ancient woodlands – referring to areas that have been forested since at least 1600 –  are at risk of damage or loss as a result of the project.

However, HS2 Ltd has said it will plant seven million trees as part of Phase 1 of the project, set for completion by 2033, creating 900 hectares of new woodland, alongside the establishment of a further 33 km2 of natural habitats.

In statement, Robert Lizar solicitors said that Cuciurean had been “singled out amongst many other activists on the site”, who were protesting at the same time as the 22 year old.

It added: “Unusually, rather than just applying for contempt of court, HS2 and the Government have specifically applied for our client to be committed immediately to prison.” 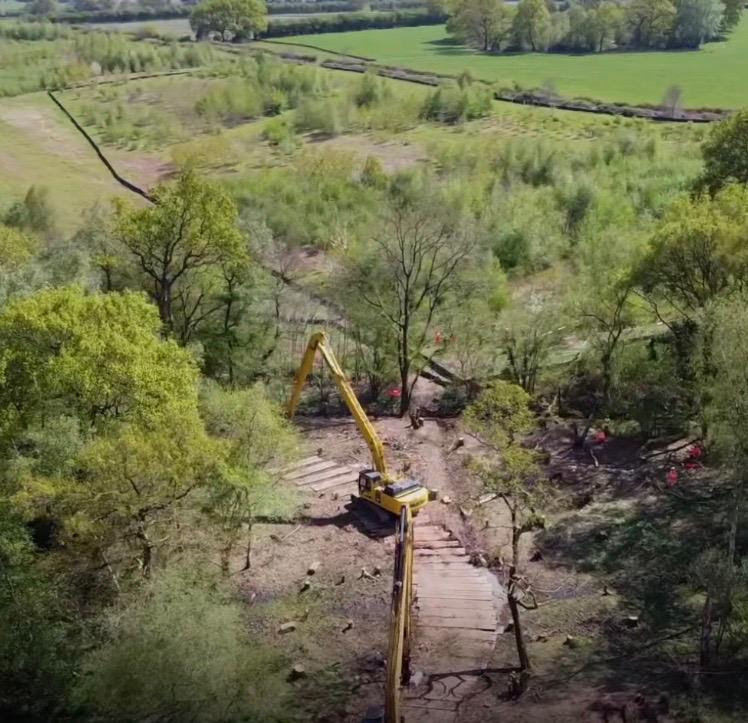 Campaign group HS2 Rebellion, which is independent of the climate change movement Extinction Rebellion,  has criticised the government and HS2 over the case.

“We are shocked and disturbed that the Government and HS2 are taking this unprecedented step, targeting a young peaceful protector and seeking to take away his liberty, for defending precious woodland,” it said in a statement.

“Unusually, rather than just applying for contempt of court, HS2 and the Government have specifically applied for our client to be committed immediately to prison.”

The group added: “We have the human right to protest and have been conscientiously protecting and upholding our natural heritage, our biodiversity and our wildlife laws and highlighting HS2’s acts of ecocide, because the Government is utterly failing to do so.”

Cuciurean said in a statement that the HS2 project was the “most barbaric use of our time, energy, and resources”.

He added: “Ancient woodland is irreplaceable and watching it being decimated for an unjustifiable project is traumatic. We need this wild land left unconcreted, to help soak up the water when the floods come, to provide shade in the scorching sun, and to help support the web of life we are part of.”

Responding to Cuciurean’s case, an HS2 spokesperson said: “Unlawful protests are a threat to the security and safety of the public and our workers, and are costly to the taxpayer.

“During the COVID-19 pandemic, the actions of Extinction Rebellion protestors have put our workers and the public at risk, and the emergency services under unnecessary strain.

“All leading wildlife organisations agree that climate change is the biggest future threat to wildlife and habitats in the UK.

“By providing a cleaner, greener way to travel, HS2 will help cut the number of cars and lorries on our roads, cut demand for domestic flights, and help the country’s fight against climate change.

“We’d urge environmental groups to help us in getting people out of their cars, off planes and onto low-carbon, high speed rail.”