How Britain Could Truly Honour Its Filipino Frontline Workers

The eyes of the world were last week fixed on a Filipino British nurse who administered the first Pfizer/BioNTech Covid-19 vaccine. The moment was rightly met with celebration, but belies how Britain treats many migrant workers – who have been central to the pandemic response, writes Cryton Chikoko.

“I’m very proud to say that I’m a Filipino British today making history,” matron May Parsons told ITV’s Good Morning Britain, after vaccinating 90-year-old Margaret Keenan last Tuesday. The nurse, who has worked for the NHS for the last 24 years, added: “I think it’s a historical event for Filipinos all across the globe and making sure we’re proud of what we’ve achieved.”

I was delighted to watch the first vaccine administered. But I was also reminded how people from minority ethnicity backgrounds – who are more likely to be key workers than their white counterparts – remain over-exposed and under-protected from the virus, which continues to spread rapidly.

Our NHS is a case in point. According to House of Commons library data from 2019, people from more than 100 nationalities work for the health service. Filipinos, like nurse Parsons, are the third most represented nationality (22,043) – after Britons (1.06million) and Indians (25,809). Meanwhile, the virus has taken a heavy toll on Filipino health and care workers. In June, the Nursing Times reported that nearly 50 UK health workers from this community had died. In May, campaigners warned that more Filipino healthcare workers had died of Covid-19 in the UK than in the Philippines.

Given everything that has happened to the Filipino community in the UK this year – incl. racist attacks and higher C19 death rates, this is such a special moment for all of us. Thank you to all the nurses who have held up our country. My heart and gratitude goes out to you all. https://t.co/kLz154iV0u

While nurse Parsons has rightly been celebrated – the UK’s hostile environment immigration rules have left countless other migrants, Filipino among other nationalities, facing destitution.

Among them is Peachybelle*, a qualified midwife who left the Philippines for the UK in 2004 when her husband passed away, in order to provide for her three teenage daughters. Her three-year work visa was sponsored by a nursing home, where she worked as a carer.

Despite the expertise and relationships, she had built up there, her application to renew the visa was refused. She estimates that she has spent over £5,000 on applications and received no legal aid. She is still in the UK living in limbo.

Meanwhile John, a qualified nurse in the Philippines, arrived in the UK with a student visa in 2008. Since the nursing home where he worked was unable to sponsor him in the midst of an economic recession, he enrolled multiple times as a student with unscrupulous institutions, paying up to £8,000 for each enrolment.

Finally, he exhausted his finances in 2015 and became undocumented. John who is asthmatic and lives with his partner and their four-year-old child with severe autism spectrum disorder, said: “Even if it’s dangerous, even if it’s risky for me, I have to go out and work to provide for my family.”

Their only wish is to contribute their skills to British society without being exploited and to improve the lives and futures of their families. It is not a crime to hope for a better life.

These stories are included in a report published in June by the Kanlungan Filipino Consortium and human rights charity RAPAR, which documented the impact of the coronavirus outbreak and the lockdown restrictions in the UK on precarious Filipino migrants.

The survey documented harrowing reports of exploitative employment and overcrowded living conditions which make physical distancing impossible for undocumented Filipinos in the UK. Many of them experience systemic barriers that prevent them and their families from leading safe, healthy and rewarding lives.

At the publication of the report Susan Cueva, a trustee of the Kanlungan Filipino Consortium, told The Guardian: “Many of the undocumented Filipinos in the UK are trained nurses, healthcare workers, teachers, or childminders.

Their only wish is to contribute their skills to British society without being exploited and to improve the lives and futures of their families. It is not a crime to hope for a better life.”

The coronavirus pandemic has intensified the effects of the Home Office hostile environment policies on undocumented migrants in the UK, with many experiencing loss of income, unsafe working conditions and scared to seek help if infected with the virus.

The report found that many undocumented Filipinos are caught between the dangers of contracting or spreading the virus at work or falling into destitution. Stripped of employment rights, reliant on exploitative employment for their own financial survival, and without recourse to public funds, the undocumented cannot report these unscrupulous employers.

Undocumented migrants and most people under immigration control cannot access welfare benefits or any kind of financial support from the government.

If they want any income at all, they have to go out to work. It will be very welcome for those whose lives have been blighted by the current immigration policy if the new ‘fair, humane, compassionate’ immigration policy promised in July by Home Secretary Priti Patel will include regularising people with precarious immigration status.

Regularisation is a procedure by which migrants who have made a foreign country their home without the appropriate documentation are offered regular status or settlement. It gives them hope and a sense of belonging.

The government can easily give undocumented migrants in the UK a life of dignity – to live without the dangers of being exploited and discriminated against by employers, sexual predators and others, due to living without secure immigration status.

We have a British Prime Minister, before his ascendance to power, who talked about regularising undocumented immigrants who “played by the rules”. He once said: “Are we really, as a society, going to go around telling people who put down roots, who have children, who might have grandchildren here ‘You know, I’m sorry, you’re going home because of the circumstances in which you came’?”, Boris Johnson said. It is about time he matches his words with action.

Regularisation will allow undocumented Filipinos, who are already in the UK, to gain fundamental rights so that they can live with dignity and participate in society fully and freely, work openly and safely contribute even further to the economy and the public purse. 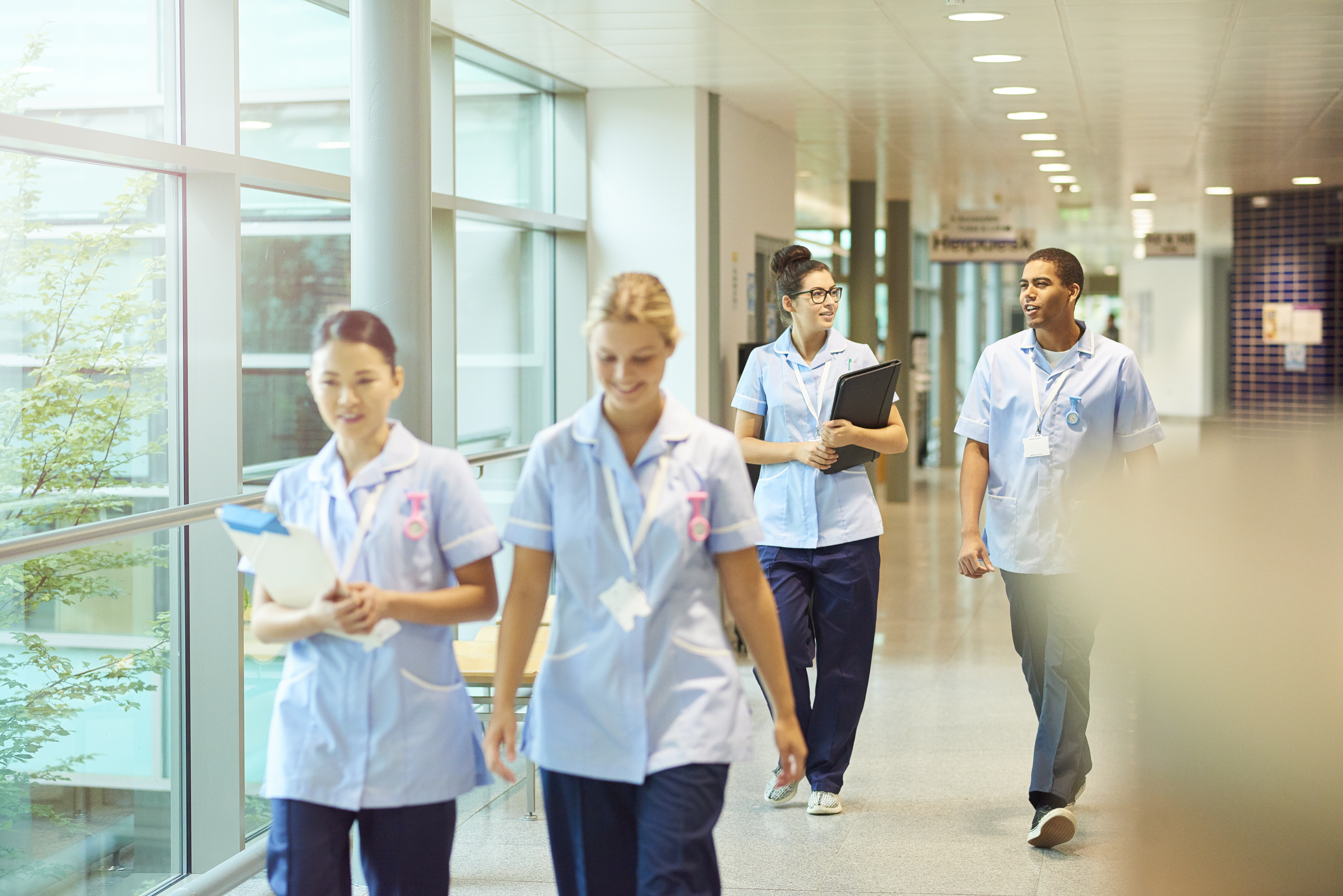 A group of four young trainee nurses including male and female nurses , walk towards camera down a hospital corridor. Credit iStock

Seeing members of their community treated well, will also boost the morale of the other Filipino migrants, like nurse May Parsons, currently serving the people of this nation.

The Royal College Nursing’s chief executive and general secretary, Dame Donna Kinnair, told The Guardian: “The simple, inescapable truth is that we do not have enough nursing staff in the UK to safely care for patients in hospitals, clinics, their own homes or anywhere else.” There were 36,655 vacancies for nursing staff in England in September.

Although there are 22,043 self-identified Filipinos who are working in the NHS, there are many others who have the skills to fill these roles but have fallen through the cracks in the immigration system. If visa fees were lower or the immigration system humane, the NHS would benefit from even more people like May Parsons and the migrants themselves would benefit from no longer being vulnerable to exploitative working conditions and destitution.

Empathy and compassion from the government

As we still cherish that exhilarating moment when migrant Filipino nurse May Parsons administered the first Covid-19 jab, we must remind ourselves that Parsons does not exist in a vacuum. The UK has a Filipino community which includes undocumented migrants who desperately need empathy and compassion from the government.

We need to stop viewing migrants simplistically as villains or heroes, low skilled or high skilled.

Migrants are first and foremost fellow human beings, beyond their utility as cogs in the wheel of economies and entrepreneurs or inventors or scientists or engineers. We need to stop viewing migrants simplistically as villains or heroes, low skilled or high skilled, the brightest and the best or scroungers and threats. This sort of categorisation entrenches a narrative that says some migrants are more deserving of rights and respect than others. Migrants are human beings who aren’t so different from people who haven’t migrated. They don’t have to do anything amazing to be validated as people.

They have dreams and aspirations for themselves and their families. I would think nurse May Parsons and many other migrant NHS workers would appreciate empathy and positive action from the government in giving undocumented people from their communities legal status. Life is too short to keep other human beings in perpetual limbo.

Justice / 8 Jan 2020 'Ridiculous' Charges Dropped Against Migrant Sex Workers Who Shared Flat
Economic / 1 May 2020 'I Am Proud Of My Work': Meet The Covid-19 Key Workers
Immigration / 30 Sep 2020 What Sergeant Ratana’s Death Tells Us About How The Media Views Migrants
Family / 20 Jun 2020 'You Can't Live Without Your Family': A Teen's Tale Of Escaping War Alone At 15