Food delivery giant Deliveroo has been urged to pay hourly rates no less than the National Living Wage as part of a report into the company by MP Frank Field and Andrew Forsey.

The pair say the report is effectively a “map and compass” to ensure greater rider flexibility and employment security.

The parliamentary inquiry was launched following a union defeat on the issues in June, and the new report found that the company’s ‘gig economy’ employment model works well for some but very poorly for others, resembling a “dual labour market”.

Some riders can earn as little as £2 or £3 — or even nothing at all at certain times  —while others reach up to £20 an hour.

A Series of Risks Without Reward The Birkenhead MP interviewed 179 Deliveroo riders, and suggests the business model resembles a system of casual labour “that prevailed in Britain’s ports until the middle of the twentieth century,” where individuals would take a series of risks without receiving the adequate reward for doing so.

One rider told Field that the uncertainty of working for the company meant it was tougher for his family to plan ahead, stating that after a short while working for Deliveroo, “it was clear that we would be unable to factor these wages into our financial planning” due to the pay being “too low and too infrequent”.

In a statement, Deliveroo argues that adopting the report’s recommendations would “limit the flexibility [that] riders value.” In defence of their current rates, they also claim that the average worker earns more than £10 an hour. The report recommends that Deliveroo makes radical changes to the nature of its work so that individuals can “gain additional security without necessarily sacrificing any flexibility.”

These include greater stability and certainty in their work, allowing workers to continue to embrace flexibility, and hourly pay rates of no less than the National Living Wage whilst they are logged in and available to work.

Furthermore, those who require more stability in their work as riders should be able to look to the firm to grant this.

In tandem, it’s recommended that the Director of Labour Market Enforcement conducts “deep dives” into sectors that offer similar jobs, to report on the levels of pay received by different groups of workers, alongside the “reality of the self-employed status.” If the investigated companies are found to be in breach of UK law, the fines could be used to fund initiatives to build up a common workforce to take a more proactive stance on protecting workers’ rights. In turn, Field and Forsey believe that employment laws should be reformed to ensure companies can prove beyond doubt that they meet the necessary criteria for self-employment.

The final point follows on from a letter to The Guardian, published in May, where Field outlined his support for a replica of California’s supreme court blueprint, which allows workers to be protected by default.

Under this legislation, companies must pass three clear tests to demonstrate “genuine self-employment”. These are designed to emphasise the element of control being exercised over workers, the nature of the work, and whether the worker operates freely. Massachusetts and New Jersey have similar laws.

Field, the current Chairman of the Work and Pensions Select Committee, has been a longstanding critic of the shape of the ‘gig economy,’ having previously described Deliveroo’s employment contract, which attempted to dissuade workers from gaining employment rights, as “gibberish”.

Full-Time Work or Self-Employed? The Rulings…

A report from the Centre for Labour and Social Studies (Class) found that over a third of all workers state that they do not earn enough to keep up with the cost of living. Last year, Deliveroo worked with over 30,000 riders.

In November 2017, a joint report and draft bill was published by the Work & Pensions and Business, Energy and Industrial Strategy Committees pushing for the creation of new laws and tougher enforcement to protect those employed by the gig economy.

They included tougher fines for noncompliance with regulations, more frequent and thorough workforce investigations, and the closing of loopholes that enables agency workers to be paid less than permanent employees.

The true employment status of Deliveroo riders is currently hazy. Although it was ruled in November that riders were self-employed, the Independent Workers’ Union of Great Britain gained permission in June to conduct a judicial review of the decision.

In June, the union GMB won a case wherein 65 Hermes couriers were ruled as workers, and not self-employed. The Leeds tribunal concluded that the company’s couriers were therefore entitled to the benefits of full employment, a full minimum/living wage, and holiday pay.

The same month saw 50 Deliveroo couriers successfully challenge the company over its employments rights claim, with the company now required to pay the couriers a six-figure settlement for these breaches. 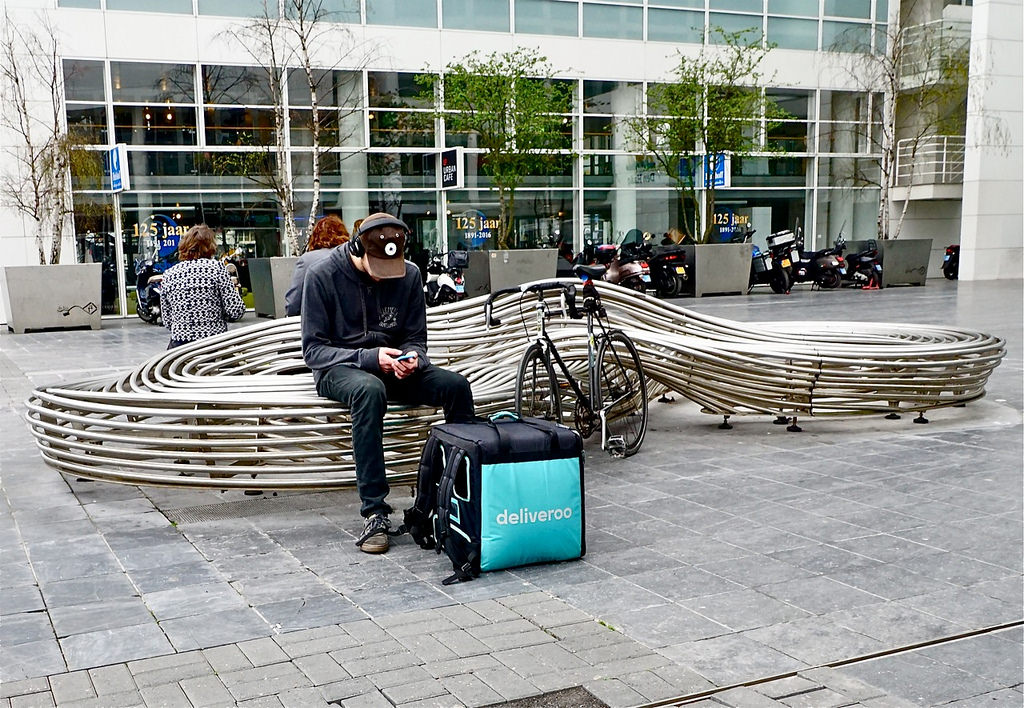 The food giant has been urged to increase pay to at least the London Living Wage.

The food giant has been urged to increase pay to at least the London Living Wage.