Apple Announces Accessibility Emojis And We, For One, Are Delighted

By Apple Announces Accessibility Emojis And We, For One, Are Delighted, 29 Mar 2018

Apple has created 13 new emojis to better represent people with disabilities, after an online search analysis revealed a high demand for diversity emojis.

Last week Apple submitted a proposal to the emoji reference website Emojipedia (which if you haven’t visited already, is an emoji-lover’s dream) for a new range of accessibility emojis. Thirteen new emojis were submitted (43 after taking into account skin tone options), including a guide and service dog, people using both mechanical and manual wheelchairs, a hearing aid-implanted ear, prosthetic limbs, and a person with a white cane.

The proposal is the result of a collaboration between Apple and the American Council of the Blind, the Cerebral Palsy Foundation, and the National Association of the Deaf. Previously, disabled emojis were entirely absent from the current roster of 1,182 officially recognised emojis. Which is a lot of emojis if you ask us.

Why Isn’t Everyone Represented? Apple has stressed that these new emojis do not represent a definitive list, but rather an “initial starting point for greater representation for diversity within the emoji universe.”

The new emojis represent four categories, which Apple describe as the ones “most inclusive to a large number of people”: blind and low vision, deaf and hard of hearing, physical motor and hidden disabilities. Emojis designed to tackle emotional and/or mental disabilities did not make the range.

Other characters that were considered but did not reach the final stage included an “eye within a magnifying glass,” “a touch tablet of PECS [Picture exchange communication system],” and “different coloured ribbons”.

Emojis are a universal language and a powerful tool for communication, as well as a form of self-expression.

Apple argues that by adding emojis that reflect users’ life experiences they can help to “foster a diverse culture that is inclusive of disability. Emojis are a universal language and a powerful tool for communication, as well as a form of self-expression, and can be used not only to represent one’s own personal experience but also to show support for a loved one.”

The emojitracker found that searches for accessibility emojis continue to outperform a number of popular searches, including ‘poodle’, which records 26.6 million Google searches, compared to ‘guide dog’ which received 32 million hits.

When Can We Use These New Emojis?

If the Unicode Consortium, which authorises the release of new emojis, gives the accessibility emojis the green light, then they should be released in the latter half of 2019.

We for one are waiting with baited breath – we love a good emoji, especially one which shares our values of equality and diversity! 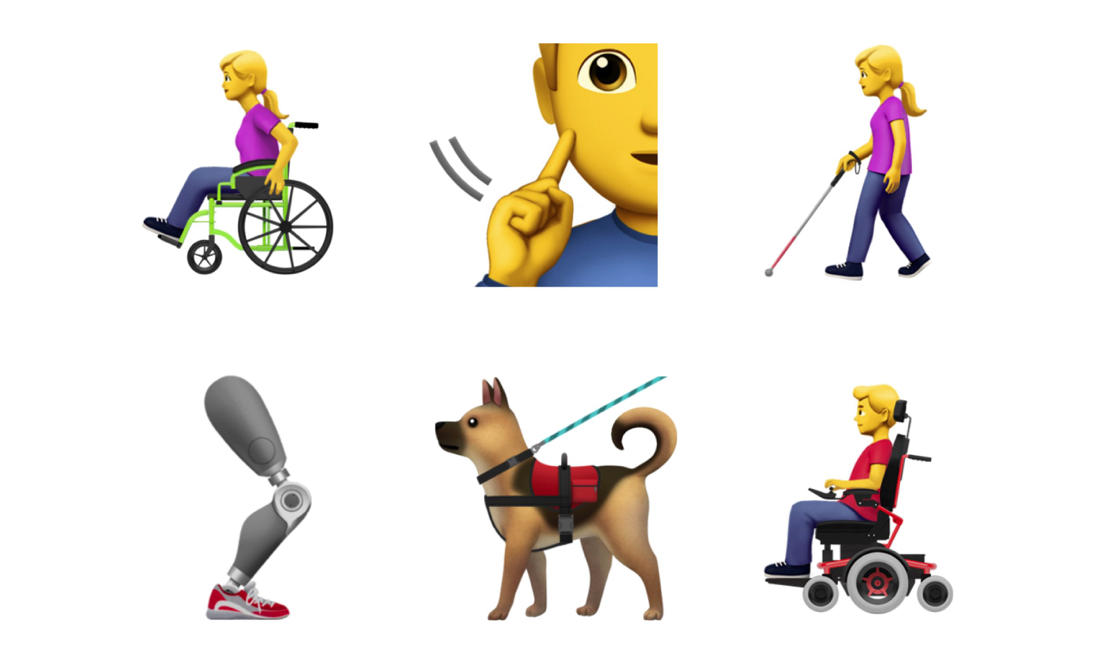 Apple Announces Accessibility Emojis And We, For One, Are Delighted