Equality, power, self-belief, and Meryl Streep. Joanne Welch, director of a campaign for 1950s-born women’s state pension rights, had plenty to share on each of these topics as she sat down to answer EachOther’s big questions.

Joanne is among an estimated 3.8 million women who have lost out on thousands of pounds after the government raised their state pension age to 66 at a faster rate than expected.

The laws, introduced between 1995 and 2011, were intended to equalise the difference in pensionable age between men and women. Earlier this year, EachOther spoke to women who were caught unawares by the change – with one fearing that she may have to sell off her home after losing more than £45,000.

Joanne has been at the forefront of a campaign called BackTo60, which seeks “full restitution” for all those affected.

Earlier this year her group took the Department for Work and Pensions to the High Court, arguing the changes unlawfully discriminated against 1950s-born women on the basis of age and sex.

The judicial review failed, but it had the effect of catapulting their stories onto the front pages of national newspapers, as well as into the agenda of the 2019 general election. The group is also seeking permission to take its case to the Court of Appeal.

Here, she speaks to EachOther about what human rights mean to her. 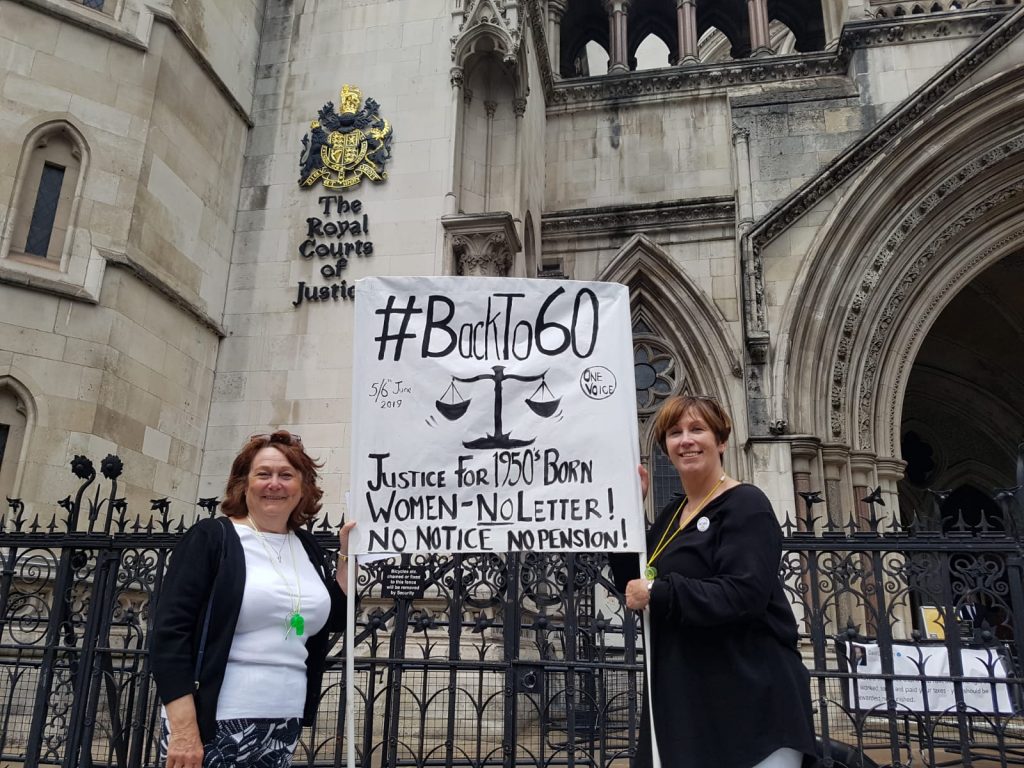 BackTo60 campaigners outside the Royal Courts of Justice in June this year. Credit: Aaron Walawalkar / RightsInfo

Describe what you do in ten words or less.

Empowering women to influence Parliament and secure their earned dues.

Embrace your god-given identity – everyone is different. I think there is a lot of commercial pressure on children. When I was young I was influenced by this pressure and also peer pressure. It was like you had to look like [supermodel] Twiggy, who was really slim, or you were not cool.

I would have liked to have had more confidence to embrace my god-given identity when I was younger. Today, young people are under constant pressure 24/7 with social media. It must be so difficult.

Who would play you in a movie of your life?

There is all this pressure to be selfish. It’s all “me, me, me”, it seems. I am not saying everybody is selfish, but it’s just quite easy to be selfish these days.

What I am proud of is that is that I have come to know this issue and I have done my best to resolve it.

I did not seek this out, by the way. It didn’t happen like that. It came knocking on my door and I took up the challenge. I saw it as God’s will and something that needed to be sorted out.

To enshrine the United Nations Convention on the Elimination of all Forms of Discrimination Against Women (CEDAW) into domestic law.

That heads off practically any kind of injustice against women.

If you could immediately put right one injustice in the UK right now, which would it be? Why?

I would remove poverty. Poverty is a political choice, and I believe it is possible to make better political choices to reduce it. We are the fifth richest country in the developed world.

Equality – which is protected by the right not to be discriminated against.

That’s not because I wish to diminish the other rights, by the way. I can see the exponential benefit of empowering women and empowering generations.

I am not talking about just equality for women. I would like to see everybody regarded as equal and having equal power.

Be the change you want to see in the world. It is very difficult to influence any political parties and institutions. But if you lead by example, and start within your community, what you do can be beneficial. Activate the change locally and build on it. Everybody can do that.