The number of women being detained under Section 2 rose by more than 25% in some areas of England, according to exclusive new FOI data.

The number of people held under Section 2 of the Mental Health Act, which permits involuntary detainment in hospital for up to 28 days, increased significantly during the first COVID-19 lockdown, according to data obtained through Freedom of Information (FOI) requests.

Women were particularly affected, with the number of women detained under Section 2 rising by more than a quarter in four NHS England trusts. In one of these, the Gloucestershire Health and Care NHS Foundation Trust, there was a 48% increase in the average monthly number of women detained between March and December 2020, from 8.5 to 12.6, when compared with the same period for the two years prior. The increase for men was 26%, rising to 11.4.

In a joint investigation by EachOther and openDemocracy, wide-ranging FOI results from 44 of the 53 NHS England trusts also revealed that the rate of mental health detentions rose by more than a quarter in four trusts during the pandemic – including in Solent NHS Trust (38 %), Gloucestershire Health and Care NHS Foundation Trust (36%),  and Cornwall Partnership NHS Foundation Trust (27%) – with those from minority ethnic groups disproportionately impacted in a number of areas.

Marjorie Wallace, chief executive of the mental health charity SANE, told us: “It is not surprising to see these increases in detentions, given the impact of isolation and loneliness on people, and the delays in appointments and treatments.”

The investigation comes amid the long-awaited ‘modernisation’ of the Mental Health Act. In January 2021, the government published a white paper addressing concerns raised two years ago in an independent review, which concluded that the legislation is outdated, removes the dignity and voice of the patient and perpetuates unconscious bias.

Sophie (not her real name), a primary school teacher in her late thirties, was detained under Section 2 at an NHS trust in south-east England for ten days in July last year, after her mental health worsened due to the pressures of the pandemic.

She was highly critical of the care she received in the run up to her detention. “There were no updates,” she said. “It was just a waiting game, and I was in the dark for most of it”.

Describing the stark lack of dignity and control she felt while in NHS hospital care in the run up to her detention, Sophie told us she was taken to the trust wearing only “very brief night shorts, a sleeveless top and no underwear”, and was offered no alternative clothing. She said nurses tried to medicate her, even though she had “explicitly told them I didn’t want to be”. She also felt intimidated by the presence of two male security guards, who escorted her throughout her time in hospital.

“Everyone requires different things but I needed comfort, I needed reassurance, I didn’t get any of that,” she said. “If I had been, I don’t think I would have been sectioned.”

A person can be detained under Section 2 if they have a mental disorder, or if they need to be assessed or medically treated and it is necessary for their own safety or that of other people.

Everyone requires different things but I needed comfort, I needed reassurance, I didn’t get any of that.

After she was discharged in late July, Sophie said she received little support and had minimal contact with the community mental health team and psychiatrist. “The support I have received has been abysmal,” she said. “I have had months to wait in between appointments with my psychiatrist.”

Sophie has been detained before, nearly 15 years ago. She said that the level of care she received this time was significantly lower. Back in 2007, she said, she had weekly visits from the Community Mental Health Team, “who really helped to build my confidence back up”. This time there were no face-to-face visits and minimal phone contact.

Our investigation follows research released by the Office for National Statistics (ONS) earlier this month, which suggested women’s well-being was more negatively impacted than men’s during the first year of the pandemic.

Assessing the social impact of the pandemic, the ONS also found that women had spent more time doing childcare and unpaid household work than their male counterparts, and were more likely to be furloughed.

“Lots of people’s mental health has suffered during lockdown, but there are a number of reasons why women may be experiencing more anxiety, depression and mental health crises than men,” said Penny Bennett, community link manager at Wish, a national mental health charity for women.

Commenting on our findings, Cornwall, Northamptonshire and Solent NHS Trusts noted that there can be many reasons for fluctuations in the rate of detentions but that the pandemic will have driven a rise in the number of people experiencing crises.

Official figures show that a Black person is four times more likely to be detained than a white person, as was echoed by our data.

In the South London and Maudsley NHS Foundation Trust, more Black people than white people were detained in the past three years, according to the FOI figures. Black people accounted for 41% – 2,436 – of detentions between January 2018 and December 2020, while white people made up 35%. This is despite Black people accounting for only 25% of the combined populations of the four boroughs – Lambeth, Southwark, Lewisham and Croydon – covered by the trust. 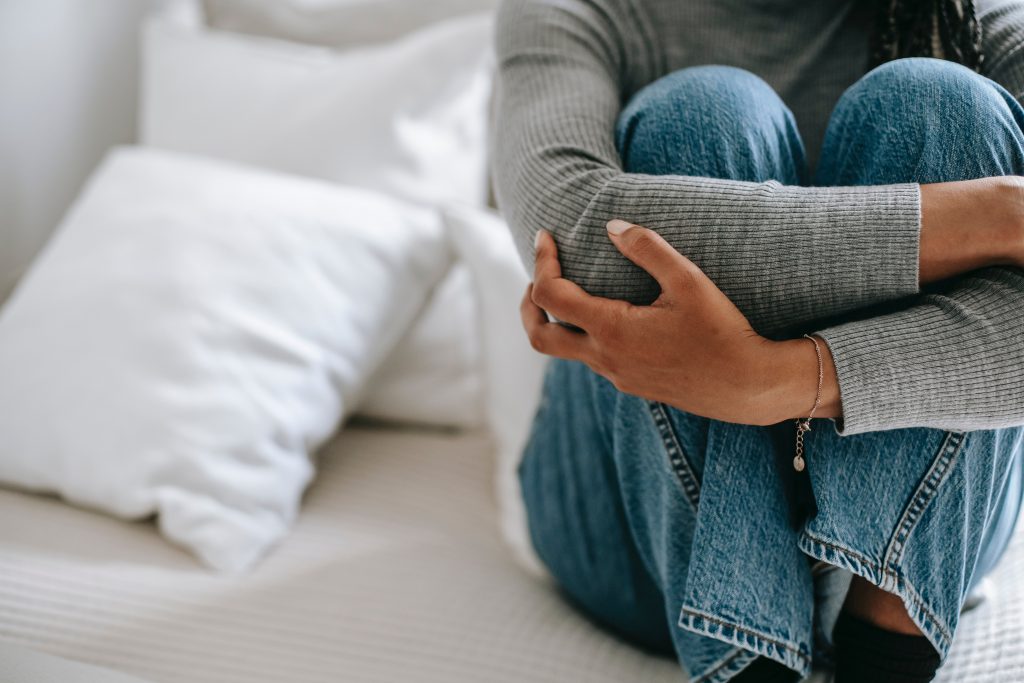 The number of women detained between March and December 2020 rose by more than 25% in four NHS England Trust, compared with the same period of time for the two years prior. (Credit: Pexels/Alex Green)

However our investigation found that the rate of detention of Black people did not significantly increase in the NHS trusts investigated between March and December 2020.

Other minority ethnic groups appear to have been disproportionately impacted in a handful of NHS Trusts. In Birmingham and Solihull, the number of Asian people detained increased by 30% from March to December 2020, to an average of 19 individuals per month. To put this into context, the number of white people detained in this trust rose by only 8%, to a monthly average of 41, during the pandemic. In South London and Maudsley, the number of mixed heritage individuals detained rose by 42% during the pandemic, to a monthly average of 6.4, compared with an increase of only 12% for white people.

The increases in detentions are reflected in exclusive data given to us by Mind. In comparison to the same month last year, February 2021 saw a 50% increase in calls to their legal support line relating to the Mental Health Act 1983.

For vulnerable people like Sophie, legal support may be crucial for understanding their rights in relation to their care and treatment – as well as whether they have a basis to appeal their detention.

However, openJustice and EachOther learned that access to justice has been an ongoing issue for sectioned patients since the start of the pandemic.

Gary Clarke, a lawyer specialising in mental health at Burke Niazi, has concerns that issues relating to COVID-19 have “seeped into decision-making” of mental health tribunals.

Patients may have their appeals rejected partly on the basis that they might not be able to comply with social distancing measures or because they won’t be getting the community support they require to keep them safe once discharged.

“This is an entirely new way of assessing a person’s mental stability and it’s dangerous territory,” Clarke told us.

Since the start of the pandemic, appeal hearings have been taking place online, causing problems for those without access to the internet, like patients who have been discharged but remain subject to Community Treatment Orders. Clarke described a client of his who phoned in for her hearing and, halfway through, was disconnected when she ran out of credit.

Online hearings also mean that the patient may not have had an opportunity to meet and develop a relationship with their advocate, which may lead to a decline in the quality of legal representation. For a very vulnerable person who may not clearly understand their circumstances, this relationship is key.

A spokesperson from the Department for Health and Social Care said: “We understand the last year has been challenging for the mental health and wellbeing of many, particularly those with pre-existing mental health conditions or severe mental illness.

“Mental health has remained a priority throughout the pandemic, with services remaining open for those who need them. We have increased support for those with severe mental illness providing an additional £50m for good-quality discharge from inpatient settings, 24/7 urgent helplines in every trust in England for those experiencing a crisis, and given an additional £500m for mental health and the NHS workforce as part of the spending review.

“In January we announced our plans to radically reform the Mental Health Act, empowering individuals to have more control over their treatment, tackling disproportionate detention of people from ethnic minority communities and ensuring those detained are treated with dignity and respect.”

The government’s public consultation, open until April 2021, will be an opportunity to ensure that people like Sophie, with lived experience of being sectioned, have their say on reforming the Mental Health Act.

“It’s crucial the UK government hears from people from different Black, Asian and other ethnic minority communities, to make sure any changes the Mental Health Act work equally well for people from different cultural backgrounds, as well as urgently tackling the underlying and systemic racism that results in disproportionate detentions and use of force,” Rheian Davies, Head of Legal at Mind told us told us.

“We are concerned however that the UK government’s questions are complex and not very accessible, and so could act as a barrier to this. This is why we are working to demystify some of the main concepts and increase engagement so that more people have their voices heard.”

A key proposal in the white paper is to give legal weight to people’s choices and preferences surrounding their own care. As Sophie told us: “I felt powerless. Decisions were taken out of my hands, it didn’t feel right.”

To add your views on reforming the Mental Health Act you can use Mind’s tool. They will use the responses anonymously as part of their comprehensive response to the UK Government.

We partnered with openDemocracy for this investigative article. openDemocracy is an independent global media platform, which covers international affairs, ideas and culture. This article is part of openJustice, openDemocracy's investigative series which looks at those who have been disproportionately impacted by the Covid-19 pandemic.

Add your views on reforming the Mental Health Act with Mind’s online tool. They will use the responses anonymously as part of their comprehensive response to the UK Government.

Whenever we undertake an investigative project, we commit to making the data available to whoever would like to see or use it.

To view the full data set used for this investigation click here.