Why The Legal Definition Of Consent Fails Victims

In England and Wales, the legal definition of consent is in Section 74 of the Sexual Offences Act 2003. It states that “a person consents if he agrees by choice, and has the freedom and capacity to make that choice”. This definition is integral to the main sexual offences, such as rape and sexual assault. There must be a lack of consent by the complainant, and a lack of reasonable belief in consent by the offender.

These seem like simple rules, but in fact they set the bar too low. They are central to why queer women in particular do not trust the legal process. Sexual experience is far more nuanced than these rules imply.

This seems a simple point. Yet the problem with consent it that it focuses on the appearance of sexual experience and tries to judge it on basis of the terms “freedom” and “choice”, which are open to interpretation and assumption.

For example, coercion is often missed as a restriction on freedom to consent. Here, a woman might consent to have sex but not because she wants to, and only to “keep the peace” in a relationship where she has been subjected to psychological and emotional abuse.

Such coercive control has recently become a criminal offence but can be invisible to the outside observer. It is of course devastating to those who feel it. In such a case, the complainant’s “freedom” to consent can be far from the reality. If the jury, judges and those making the law do not understand the sexual experience of the complainant, then how can they understand the offence? This is particularly a problem with queer women. Lack of accurate representation of bisexual and lesbian women in the media is a key component in not understanding harm against queer women, since nothing is known by those judging consent about types of harm that are the “norm” in queer sexual experience.

For example, queer women are as likely, if not more likely, to experience sexual violence and harassment due to widespread assumptions of being highly sexed or “needing” a man. They can also be subject to violence if they do not perform to straight fantasies, as is believed to have happened recently on a London bus. This hyper-sexualisation means queer women are often assumed to be consenting, but also means different kinds of abuse (other than straight penis-in-vagina rape) are not considered to be as serious.

Such gaps in the understanding of what constitutes “freedom” in the context of consent can effect outcomes in court. This can be happen through re-victimisation in the court process. Victims often have to battle with assumptions such as “she was asking for it”, or “she was wearing a short skirt”, or “she did not resist”. Straight fantasy narratives such as Fifty Shades of Grey can be imposed on abusive situations and used to excuse them.

This is an example of a “rape myth”: a stereotype or false belief that is used to excuse sexual violence. One study found that rape myths pose a significant barrier to the processing of sexual offences cases and can lead to unjust acquittals. Such myths are a particular problem to queer people since lawmakers, judges and juries are often not able to categorise them as consenting or not as their desire and actions do not fit familiar “straight” narratives and myths.

Queer black women also find the concept of consent to be white, and unable to encompass the sexual harms of “misogynoir”: the objectification and dehumanisation of black cis, trans and non-binary women. Despite being more likely to suffer sexual offences and intimate partner violence, they are less likely to report sexual assault. The notions of “freedom” and “choice” in what is a white idea of consent do not recognise these realities.

But the most important thing to recognise here is that one version of consent will never fit all. One study argues that considering consent practically – case by case – would help to recognise potentially harmful power structures at play in sex, both inside and outside of a heterosexual context.

What is certain is that “agreement” should be the bare minimum. The Coalition for Consent, a group of intersectional activists campaigning for education and accountability, suggest that we should consider further dimensions to consent: that it needs to be informed, freely given, ongoing, and enthusiastic. The starting point for an inclusive consent, in this view, is through queering sex education, making for a sex-positive inclusive instruction in consensual sex.

This lack of queer consent talk in education is symptomatic of a broader lack of understanding of anything beyond the straight narrative. This ignorance pervades schools, homes, streets, bars and clubs – yet originates in the courtroom, and the standard that the law has set for consent. Once this legal standard changes, a more inclusive concept of consent will follow. 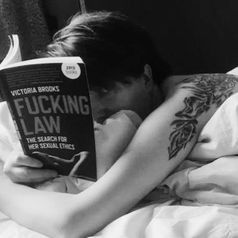 Victoria Brooks Law lecturer, University of Westminster
Visions / 17 Mar 2022 Should Access To The Internet Be A Human Right?
Institutions / 17 May 2022 More Needs To Be Done To Make Freedom Of Information Sustainable In Scotland
Equality / 16 May 2022 What's New In Human Rights In Scotland? EachOther Is!
Disability / 13 May 2022 Repeat Safety Failures In A Mental Health Unit Contributed To A Man's Death
Discrimination / 12 May 2022 Homeless People Sleeping In Cars Or Tents Could Be 'Committing' A Criminal Offence