“We’re not saying it’s just trans lives that we should be focusing on; we’re saying that trans lives matter too,” said Nic Dawes, 36.

Dawes, who is black and trans non-binary, was among thousands of people who took part in the Black Trans Lives Matter march through central London on Saturday (27 June).

Dawes said that, as a trans person, one of their “biggest issues is trying to justify or explain to people our existence to cisgender people”, including supporters of the Black Lives Matter movement.

“Even at the weekend I had a back and forth with my friend’s mother-in-law about why there was a Black Trans Lives Matter march,” they said.

“She was saying: ‘We’re all black, we’re all marginalised, we should all be marching together.'”

Dawes added: “We’re not saying it’s just trans lives that we should be focusing on; we’re saying that trans lives matter too.

“All we’re saying is these people have lost their lives, they have not received justice, and the reason why there is no voice behind it from the black community as a whole is probably because they’re trans.” 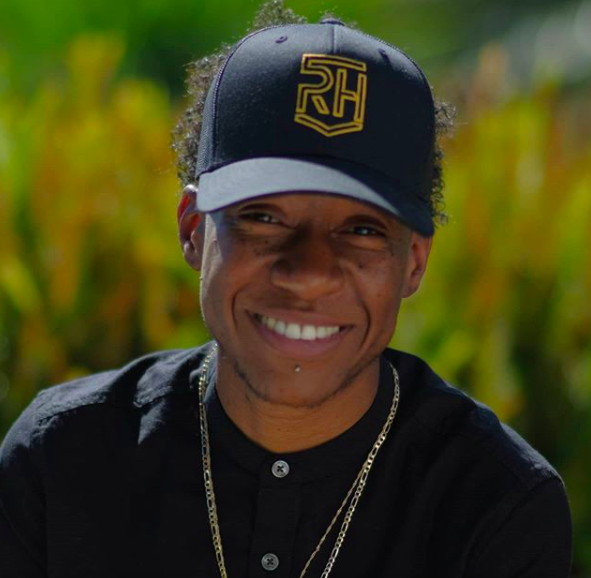 However, speaking of their experience of discrimination, Dawes stressed that people have perceived them as “more of a threat” for being black than being trans.

They explained: “I’ve had a couple of incidents where I’ve tried to be helpful to someone, for example [saying]: ‘you’ve dropped your whatever’ … and the aggression with which I’ve been met, I’m just like: ‘Wow.'”

The demonstrations – supported by Black Lives Matter UK’s London branch, BLM LDN, and London Trans+ Pride – were also organised to protest against the feared abandonment of proposals to reform the Gender Recognition Act.

Earlier this month, The Sunday Times reported that the government is set to scrap plans to make it easier for transgender people legally to change gender.

For Dawes, education is needed to stop discrimination against black trans people.

“If we’re going to speak specifically about black trans lives then I believe that’s down to education and undoing some of the religious bigotry that we inherited through colonisation,” they said.

The Black Trans Lives Matter protests, which have also taken place in America, follow mass anti-racist protests organised in response to the brutal murder of George Floyd, a black man killed by a white police officer in the US. 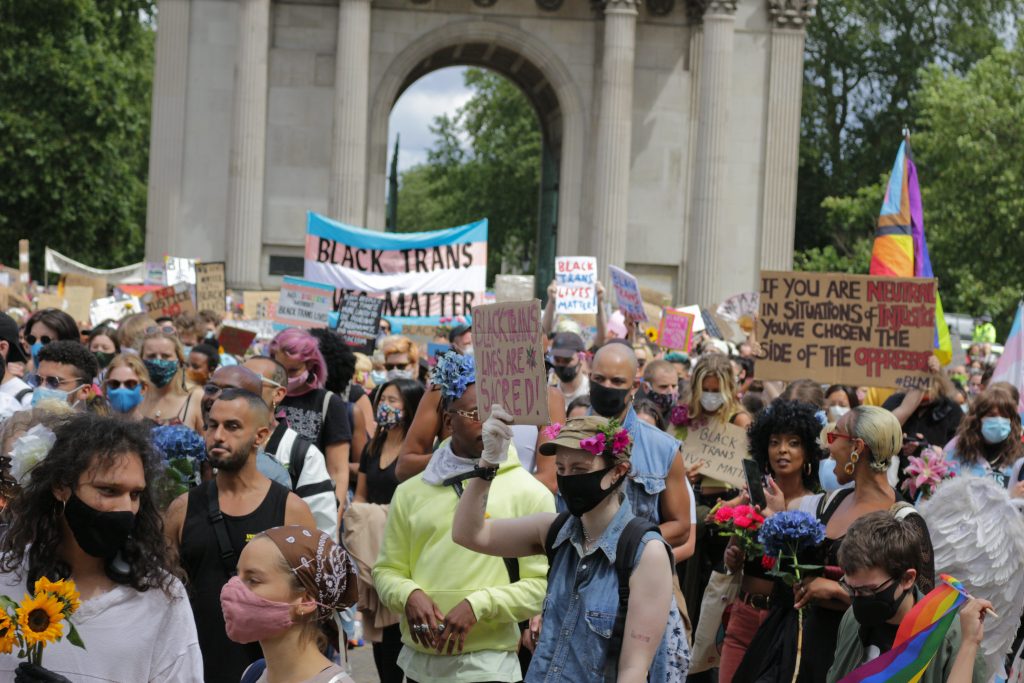 In 2019, at least 22 transgender and gender non-conforming people were killed in the US – all but one were black women – according to a report by the Human Rights Campaign.

“At this moment, transgender women of [colour] are living in crisis,” HRC’s president Alphonso David said in the publication.

The foundation has also documented that more than 150 transgender and gender non-conforming people have been the victims of fatal violence in the US between 2013 and 2019, with at least 127 being black and minority ethnic (BME) and nine in ten being trans women.

In an opinion article for the Independent, writer Melz Owusu commented that the recent police killing of black trans man Tony McDade in the US had not received the same level of attention as that of Floyd, writing: “Some black lives are still considered more valuable than others.”

Owusu added: “To be black and trans is to live on the edge of life – knowing at any moment it can be snatched from you.”

In the UK, Naomi Hersi, a black transgender woman, was murdered in March 2018. The case sparked accusations against the British press of discrimination against transgender people. Following Hersi’s death, LGBTQ+ rights charity Stonewall issued a statement criticising media coverage of her death as a “disgrace”, noting that she had been repeatedly misgendered.

In recent years, hate crimes motivated on the grounds of both race and gender identity have significantly increased in the UK.

The right not to be discriminated against is protected under Article 14. This prohibits discrimination on the basis of “sex, race, colour, language, religion, political or other opinion, national or social origin, association with a national minority, property, birth or other status”. The case law relating to this right shows that it has been used to protect transgender people.

Transgender people are also protected from discrimination by the Equality Act 2010.

Meanwhile, the UK has a patchwork of legislation intended to outlaw hate crime on the basis of five protected characteristics:

The Law Commission defines hate crimes as “acts of violence or hostility directed at people because of who they are”.

The Commission has expressed concerns that not all of the five characteristics are protected equally under the criminal law – and must be consolidated and updated.

Christopher Joell-Deshields, founder and executive director of Black Trans Alliance, which has been set up to support black trans people in London, said that the the Black Trans Lives Matter protests acted as a “timely reminder” that “trans women of colour helped to ignite the Stonewall riots which were the birth of the LGBTQ+ movement.”

The Stonewall uprising on 28 June 1969 was an historic moment, which many believe sparked the modern gay liberation movement in the US and also led to the organisation of Pride parades.

“It’s disappointing to see the black LGBTQ+ community left behind, particularly those in the black trans community,” Joell-Deshields told EachOther.

“As a cis[gender] black gay male and an ally to the trans community, I could no longer stand on the sides and have black trans lives erased within power structures and ecosystems across society.

“I could no longer bear the pain to hear of another black trans woman murdered in the US or the witness a rollback of rights with the Gender Recognition Act.”

What's the history behind Pride parades?

In the early hours of 28 June 1969, members of the LGBTQ+ community at Stonewall Inn in New York City’s Greenwich Village rioted against police in response to a raid – a regular occurrence at gay bars at that time. A number of black and minority ethnic activists were cited as pivotal during the uprisings, including butch lesbian Stormé DeLarverie, who some say sparked the rioting after she fought back against police when they detained her, and drag queen Marsha P Johnson, who recounts her experiences of the night in a 1970s interview. The rioting continued on and off for five days.

The riots arguably galvanised the LGBTQ+ rights movement in the US. Within weeks, the Gay Liberation Front (GLF) – a coalition of LGBTQ+ activist groups – was formed. Although GLF only lasted a few years, it had a lasting and global influence, setting up a newspaper called Come Out!,  and leading to offshoots in Canada and the UK. Other LGBTQ+ groups were established too, including the Gay Activists Alliance (GAA), Street Transvestite Action Revolutionaries (STAR), and Lavendar Menace.

In 1970, what would later become known as the first Pride marches took place in several US cities to commemorate the first anniversary of the Stonewall riots. These were held in New York – where the march was called Christopher Street Liberation Day – Los Angeles, Chicago and San Francisco. The Stonewall riots are widely considered as the catalyst for the modern fight for LGBTQ+ rights in the US, paving the way for the decades that followed. By the 1980s, anti-sodomy laws had been decriminalised in most US states, while equal marriage was legalised across the country in 2015. Earlier this month, a landmark Supreme Court ruling barred employment discrimination nationwide on the grounds of sexual orientation and gender identity.