A trade union is taking legal action against the Metropolitan Police after its barrister was arrested at a protest outside a medical university.

The United Voices of the World (UVW) union’s barrister, Franck Magennis, was arrested and then, moments later, let go as he joined picketing security guards at St George’s, University of London, in Tooting, on Monday.

The guards, who are employed by outsourcing giant Noonan, began 48 hours of strike action to protest what UVW describes as an “antiquated and discriminatory regime of outsourcing”, which they claim means they receive lower salaries and sick pay.

Footage posted on social media appears to show Magennis in handcuffs behind a police van near the university’s Cranmer Terrace entrance. A police officer inserts a key into the cuffs before the camera turns away.

“Workers should be allowed to go on strike without being threatened with arrest. This is an outrage,” Magennis said.

“If my false imprisonment goes unchallenged, that would allow the Metropolitan Police to criminalise what is lawful civil activity, and would have a chilling effect on workers’ ability to stand up to bosses and exercise their civil liberties.”

Union spokesman Kane Shaw said that the group had been protesting for around 50 minutes when police arrived at the scene and told them that the volume of their music was too loud.

“They initially said: ‘You are being a nuisance, you will be arrested if you do not leave within five minutes.’ At which point we turned off the music.”

Police warned protesters that they were in breach of section 119 of the Criminal Justice and Immigration Act, Shaw added. This law makes it an offence to cause a “nuisance or disturbance” while on NHS premises without reasonable excuse.

Magennis was arrested after he told the officer “it’s laughable – no judge is going to support you on this”, Shaw said.

The barrister was then dearrested moments later after he told the police he would sue them, he added.

The union has described the incident as “frightening” in regard to workers’ rights and civil liberties, and has vowed to take legal action.

Shaw added that UVW has conducted four weeks of similar strike action outside St Mary’s Hospital, in Paddington, and faced no issues in relation to section 119.

The right to protest is protected under Articles 10 and 11 of the Convention on Human Rights – the rights to freedom of expression and assembly.

Both these right are qualified. This means public authorities, such as the police, can take proportionate steps to curtail them if deemed necessary to protect public health and safety, among other reasons.

A Met police spokesman said that officers were called to reports of anti-social behaviour in St George’s Hospital, in Blackshaw Road, shortly after 8.30am on Monday.

He said: “Officers attended. A group of protesters were found who were refusing to leave NHS premises.

“One of the protesters was arrested for a public order offence but was then dearrested once the group of protesters had been moved off NHS premises.”

‘We Are Being Treated As Second Class’ 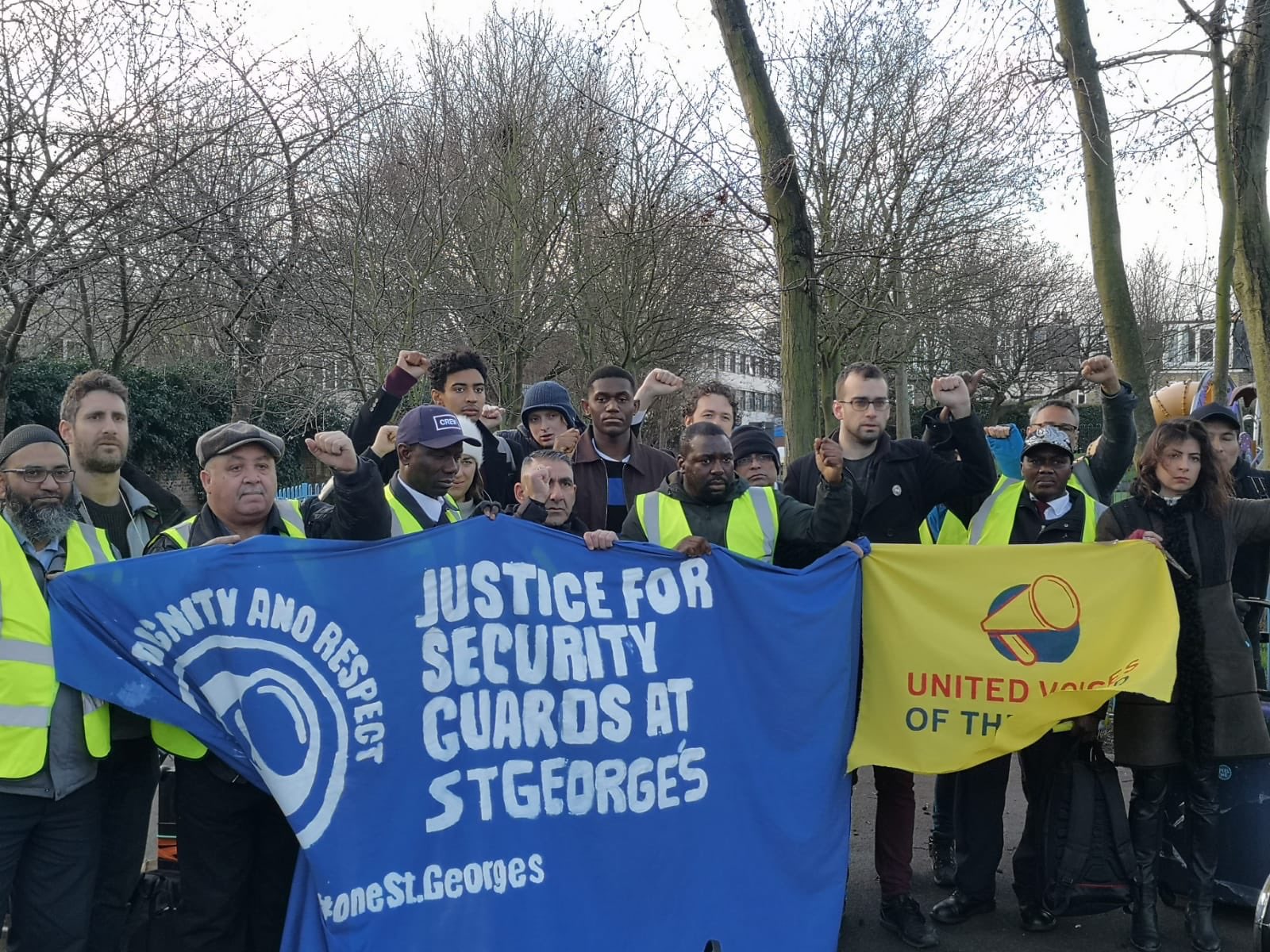 The 25 security guards at St George’s – who are largely black, Asian and minority ethnic (BAME) – are demanding to be employed directly by the university.

According to UVW, they are currently paid less than the university’s lowest-paid in-house staff and only receive the statutory minimum sick pay and other conditions under their contract with Noonan.

Staff employed by the university receive six months full sick pay, followed by six months half sick pay, according to UVW, while the guards receive just £18 in sick pay and nothing for the first four days.

One security guard said that this discrepancy makes him feel “treated as being second class”.

“They [St. George’s] say they treat us well, but we are overworked and have to come into work when we’re sick,” he said. “The university couldn’t work without us, so why don’t they employ us?”.

The group are set to take 13 days of strike action throughout January and February, coordinated by UVW.

UVW organiser Petros Elia said that his union has obtained a report commissioned by the university which shows it could save £200,000 a year by in-housing the workers.

“It is indefensible that it continues to outsource them and can only be because they do not consider them worthy of being university employees,” he said.

“Other universities are moving away from this discriminatory and antiquated practice, and we hope that St. George’s will quickly follow suit and avoid further disruptive strike action.”

The union is considering mounting a legal bid arguing that the government’s use of outsourcing constitutes indirect discrimination under the Equality Act 2010, with staff predominantly from black, minority ethnic, or migrant backgrounds.

The 2010 Act makes it illegal for public authorities (among others) to treat employees unfavourably on the basis of a “protected characteristic” – such as race, disability, or sexual orientation.

Noonan and St George’s University have been contacted for comment.