Born and raised in Brixton, south London, Ife Thompson is a campaigner, who co-founded BLAM UK, a non-profit organisation that runs workshops on Black history in schools and provides free therapy sessions. In this interview, we learn more about Thompson’s work, and the people who inspire her.

It wasn’t until she reached university that Ife Thompson, 26, learnt about Black British history. She recalls one instance where she attended an “ad hoc” open session set up by one of her lecturers, when she found out that there were Black Tudors, as is the subject of a book by Miranda Kaufmann, and the Black British Panthers movement, which fought for the rights of Black people in the UK from its inception in 1968 through to its demise in around 1973.

She describes the UK’s education system as “Eurocentric” and explains that the Black history that she was taught about in school was “very American focused, about Rosa Parks, Martin Luther King”.

While studying at the University of Sussex, Thompson set up a society with her friends, called The Unit, which focused on bringing people together around Black British culture and identity. 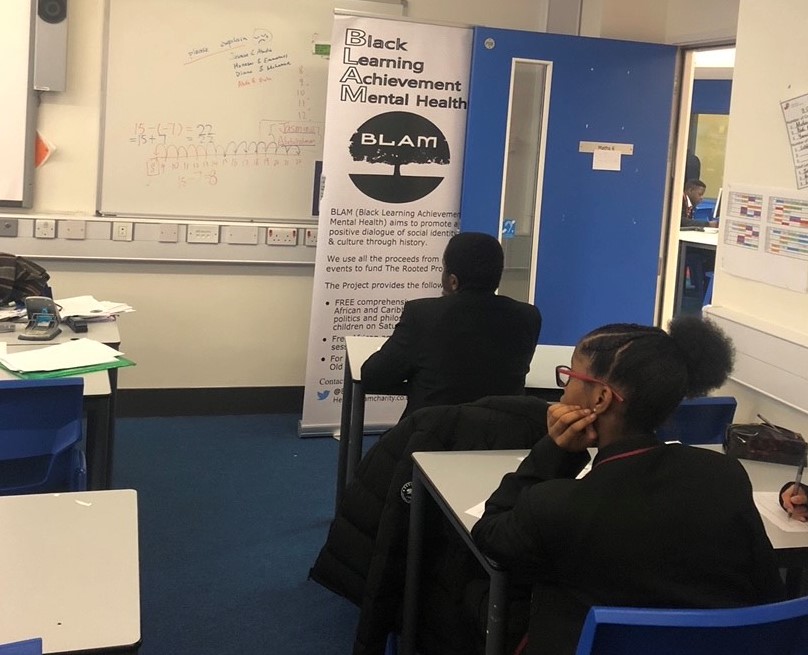 School children during a BLAM workshop in Lambeth. (Credit: Courtesy of Ife Thompson)

This society served as the beginnings of Black Learning Achievement and Mental Health (BLAM UK), which Thompson and her friends launched in 2017 following the Black Lives Matter protests in the year before. Thompson describes the reignition of the Black Lives Matter demonstrations in 2016 as a “real catalyst to actually have this permanent site”.

I went through secondary school and primary school not learning anything about Black British history.

“All of us within the organisation are from the community as well, so we are directly impacted, ” says Thompson of BLAM’s work. “So, we bring our lived experience into creating projects to ensure that we can really meet the needs of local Black communities in the UK.” In April last year, BLAM registered as a community interest company, meaning that any of its profits are used for the public good.

BLAM’s work revolves around learning and mental health awareness for the Black community. While it is based in London, moving online due to the COVID-19 pandemic has meant that its work has reached even more Black people across the UK, including in Manchester, Cardiff, and Brighton.

Asked about her recent highlights, Thompson mentions BLAM’s racial wellness project called Zuri Therapy, launched after the killing of George Floyd in the US in May last year. Every month, the organisation offers free virtual racial wellness workshops, run by Black psychotherapists.

“It was really important because it was a way of exploring and understanding effects of racism to our wellbeing and mental health via the lens of racial trauma,” says Thompson of the project.

“Racial trauma allows us to explore the intersects of institutional racism, structural racism, [and] how we view ourselves.”

She explains that initiatives like BLAM’s Zuri Therapy provide an “African centred psychology, [which] allows us to decolonise the therapeutic space as well, because currently it is viewed from a very Western lens”.

Thompson adds: “We really wanted to create a space where, for us, our Black identities are valid, and how we view the world is seen as a norm and not othered. BLAM stands firmly as a space actively resisting racism, white supremacy and the white norm.”

‘We really wanted to create a space where, for us, our Black identities are valid’ 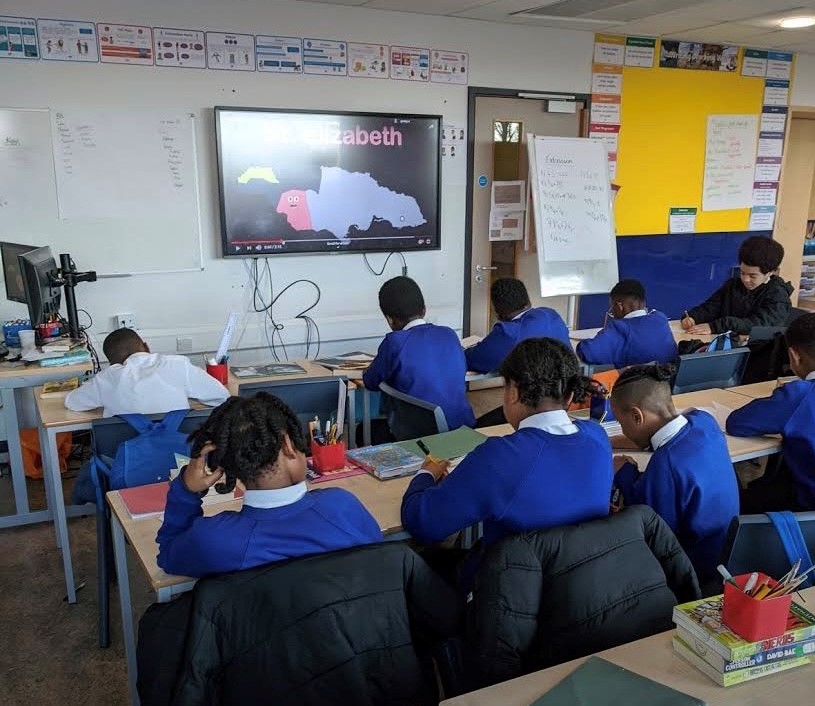 “Young people must be able to bring their lived experiences to lessons.”  (Credit: Courtesy of Ife Thompson)

Alongside Zuri Therapy, BLAM has partnered with several schools in the Borough of Lambeth, providing workshops and training for teachers on how to incorporate Black narratives into the curriculum.

Thompson has witnessed first-hand the positive impact of these workshops on Black students at the schools she has worked in. “We had one child whose parents are Rastafari, and you could see how excited he was when we did something on Rastafari tradition as that’s his background, and he had never been afforded the privilege to see his story being valued in a normalised space of learning for young people,” she says.

“Young people must be able to bring their lived experiences to lessons and have the opportunity to develop a love of learning based around them as a person. Whereas what we’re seeing normally is that their lived experiences, their norms, their cultural values, are excluded, it sends a strong message that you’re not valuable, and your culture, identity and history is not deemed as worthy of study.”

In addition to physical workshops, BLAM has a range of online resources for teachers and parents across the UK, which has previously included free worksheets on African and Afro-Caribbean history for key stages 2, 3 and 4.

“We’re really pushing against that historical harm of racism, which made Black history and Black people be seen as invalid,” says Thompson.

In January, BLAM also launched The Black Rights Project, a human rights advocacy project, which supports Black individuals in drafting direct complaints to the United Nations’ Human Rights Council regarding human rights violations in the UK. They include the areas of policing, education, health care, mental health, and discrimination. 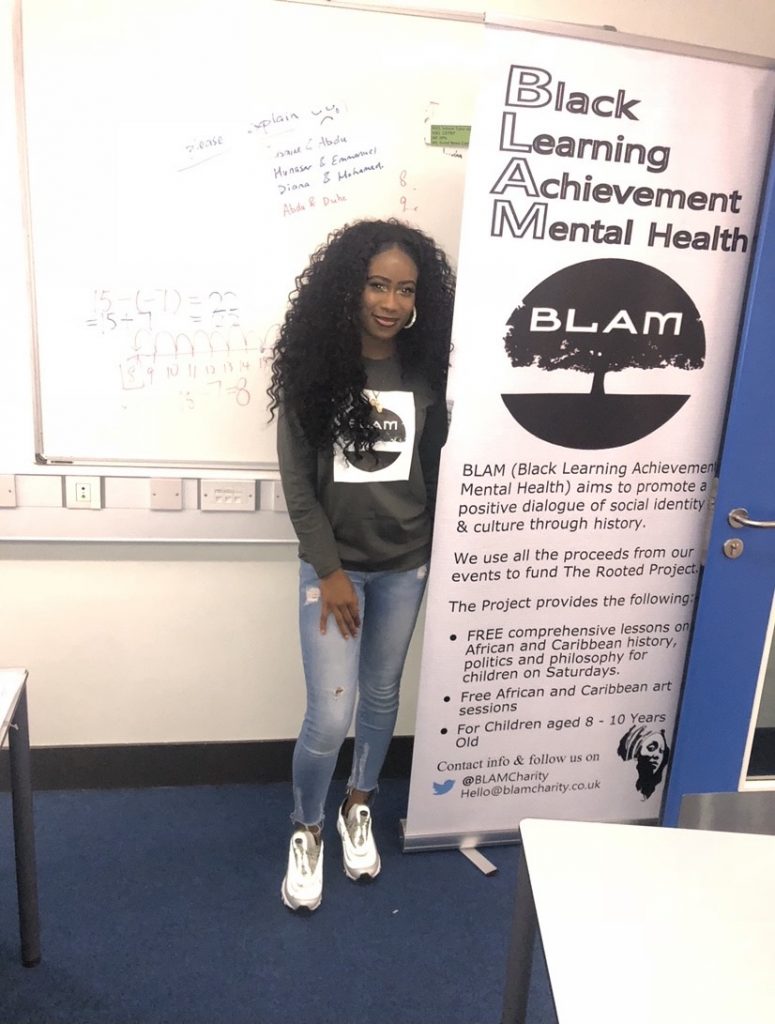 “As a directly impacted person, I feel compelled to give back to my community.” (Credit: Courtesy of Ife Thompson)

Outside of BLAM, Thompson has a lot going on. In November, she was selected to represent the UK internationally as a United Nations Fellow. On top of this, she is a Bar Professional Training Course (BPTC) graduate, who was called to the bar last year. In the aftermath of the killing of George Floyd in May 2020, Thompson founded a group called Black Protest Legal Support UK, which provides legal advice to people taking part in anti-racist demonstrations. More than 250 solicitors and barristers have signed up to the group as independent legal observers.

Thompson explains that, as someone who experiences racism, she has no choice but to take action. “As a directly impacted person, I feel compelled to give back to my community, I feel compelled to react, because I know what it feels like to be on the receiving end,” she explains. “I experience that racial trauma. I see people in my community being the subject of state violence and anti-blackness in all spheres of life.”

For Thompson, she is “following in the footsteps of those that have gone before me”, including Malcolm X, Leila Hassan Howe, Assata Shakur, Queen Nanny, Queen Nzinga, Walter Rodney, and Eric and Jessica Huntley. “I have no choice but to resist it because this affects me,” she says.

If you want to learn more about BLAM UK, or donate to support its work, visit its website.