In Pictures: How We Can Build A Human Rights Bridge Out Of Poverty

By Dr Koldo Casla, Human Rights Centre of the University of Essex, Susanna Hunter-Darch, Social Rights Alliance England 4 Feb 2021
A new cartoon series shares the voices of those with lived experiences of poverty.

What do people need to enjoy everyday life? What are the essential conditions to live a life in dignity, safety and freedom? And what are the rights that belong to all of us? Susanna Hunter-Darch and Dr Koldo Casla share a series of new cartoons exploring these questions, from the perspective of those with lived experience of poverty.

On 21 January, more than 50 people from different parts of the UK gathered online in the first of a series of events to explore questions like these in detail. The events aim to bring together people with lived and learned experiences of poverty, allowing them to learn from each other, and to think through how we can use human rights to build a bridge out of poverty. 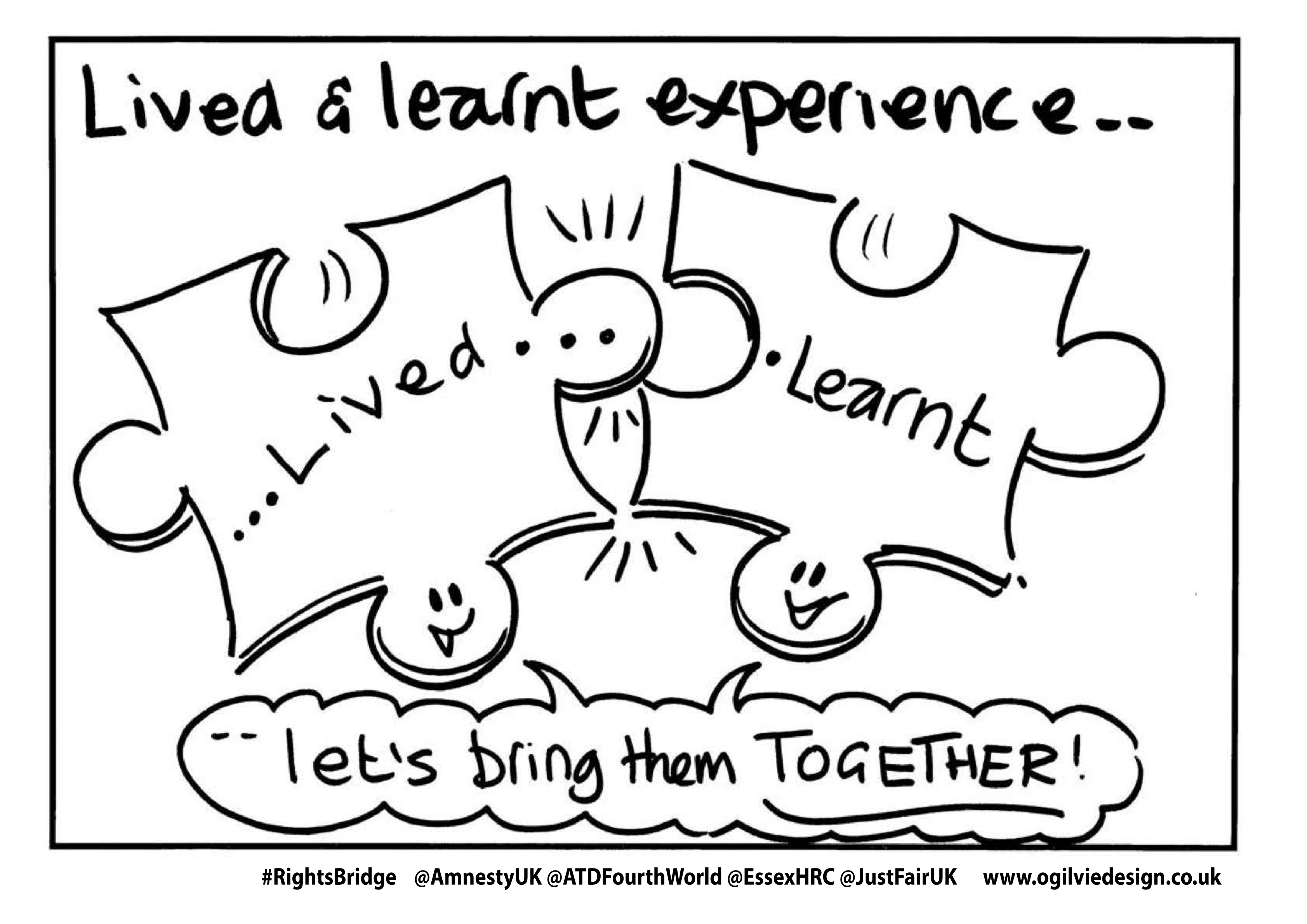 The event aimed to bring together people with lived and learnt experiences of poverty.

Even before COVID-19, poverty has been one of the UK’s biggest issues. An unprecedented report from the UN Special Rapporteur on Extreme Poverty and Human Rights in 2018 documented that 14 million people lived in poverty in the UK, with 1.5 million of them in destitution.

Philip Alston’s findings said that cuts to social services were part of the reason so many people were facing destitution, despite such high levels of employment. “The conclusion is both clear and bitter,” he wrote. “Deep cuts to public services do not work and work does not pay for too many people.” 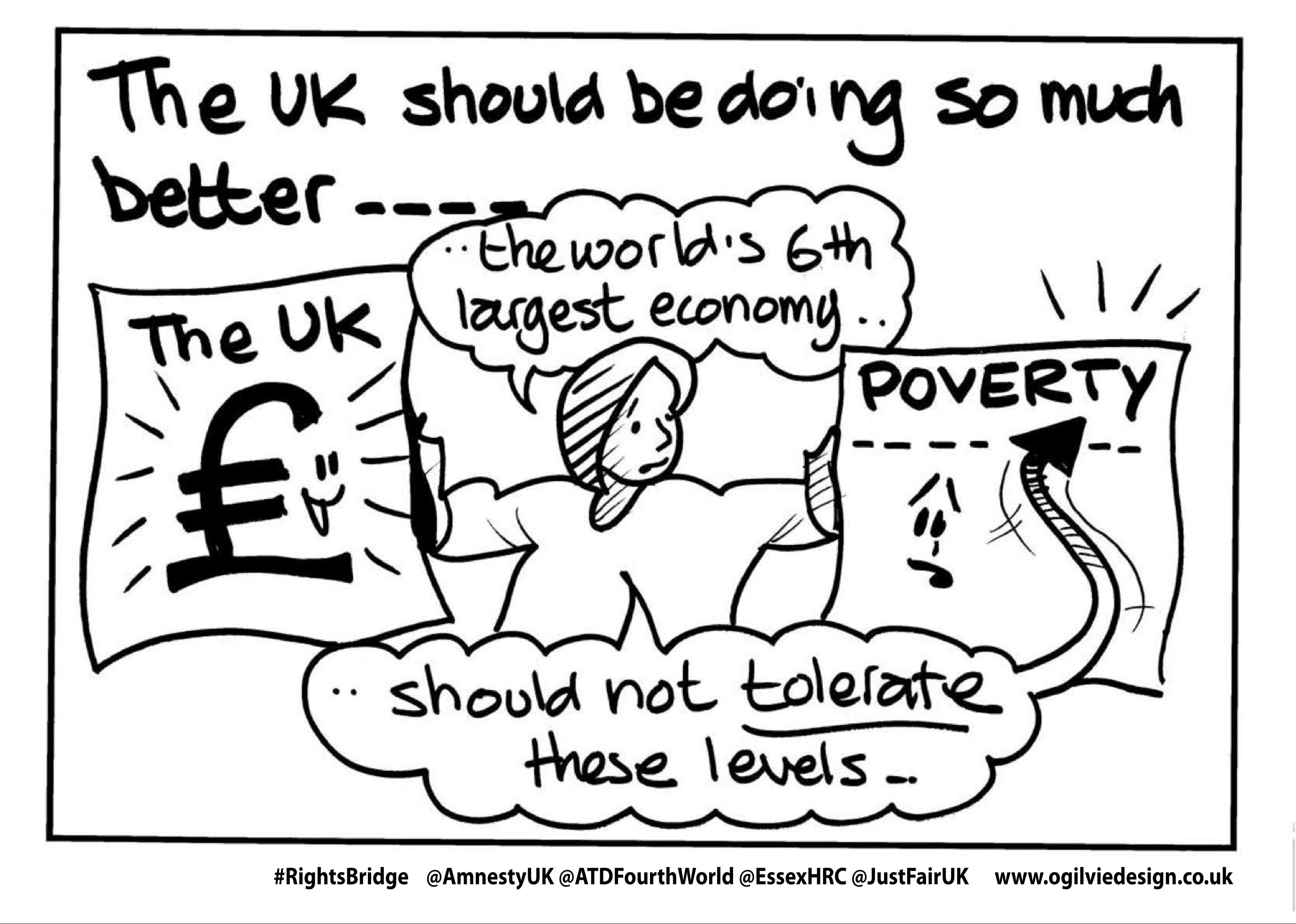 A report from the UN Special Rapporteur condemned the UK’s record.

Fourteen million people live in poverty, one and a half million of them in destitution, four in ten children are poor, food banks proliferate, homelessness and rough sleeping are on the rise, life expectancy is falling for women born in deprived areas… And all of it despite historically high employment levels. The conclusion is both clear and bitter: Deep cuts to public services do not work and work does not pay for too many people.

We believe that there is no better way to champion social rights than to hand over a megaphone to the people most affected by inequality, public spending cuts and social exclusion. 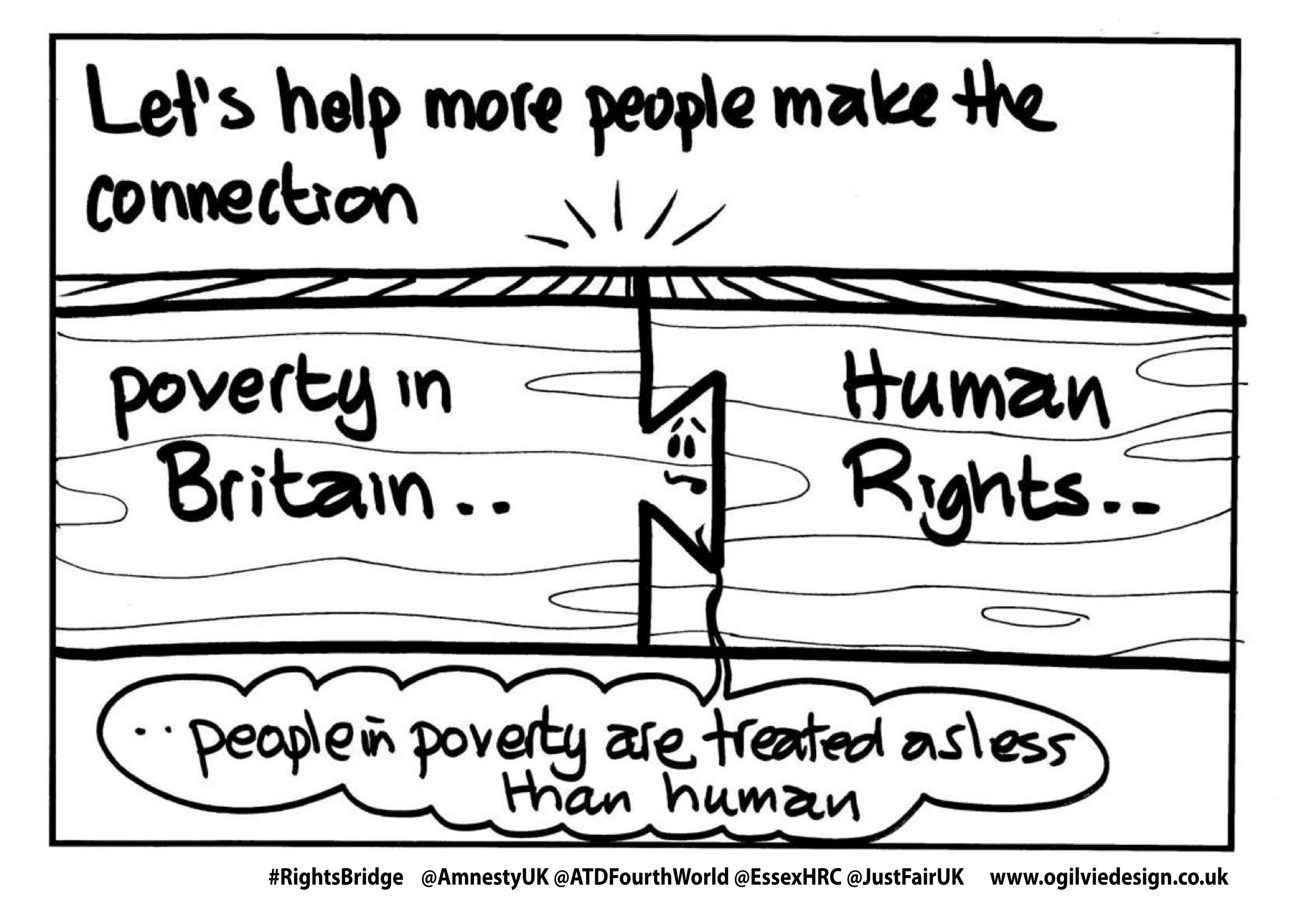 The event is the first of a series.

Academics often argue in support of or against the alleged timelessness and universality of human rights. Meanwhile, community groups around the country show that the endurance of human rights depends on what we do with them closer to home in our local communities. Take, for example, York as a ‘Human Rights City’ or Brighton’s proposed ‘Homelessness Bill of Rights’. Both are key examples of localising the language of human rights to become meaningful and relevant. 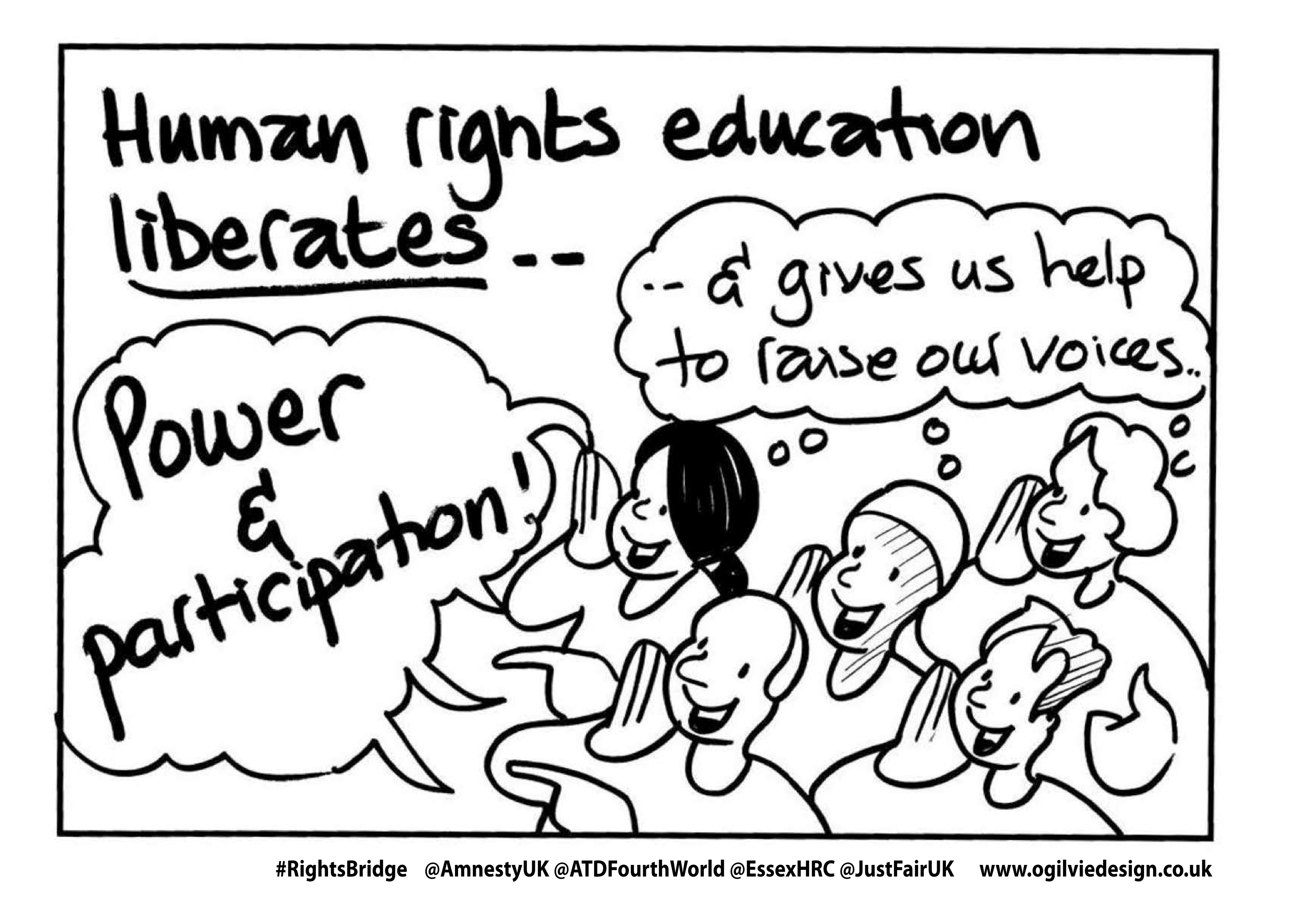 The experiences of these community groups contribute to connecting international human rights law with local activism in a way that reinforces both spheres, but puts the centre of gravity of human rights action and research at the local level. These cases encourage us to expand and develop a model of human rights advocacy from the ground up, reflecting lived experiences and amplifying local narratives to trigger hope and change. 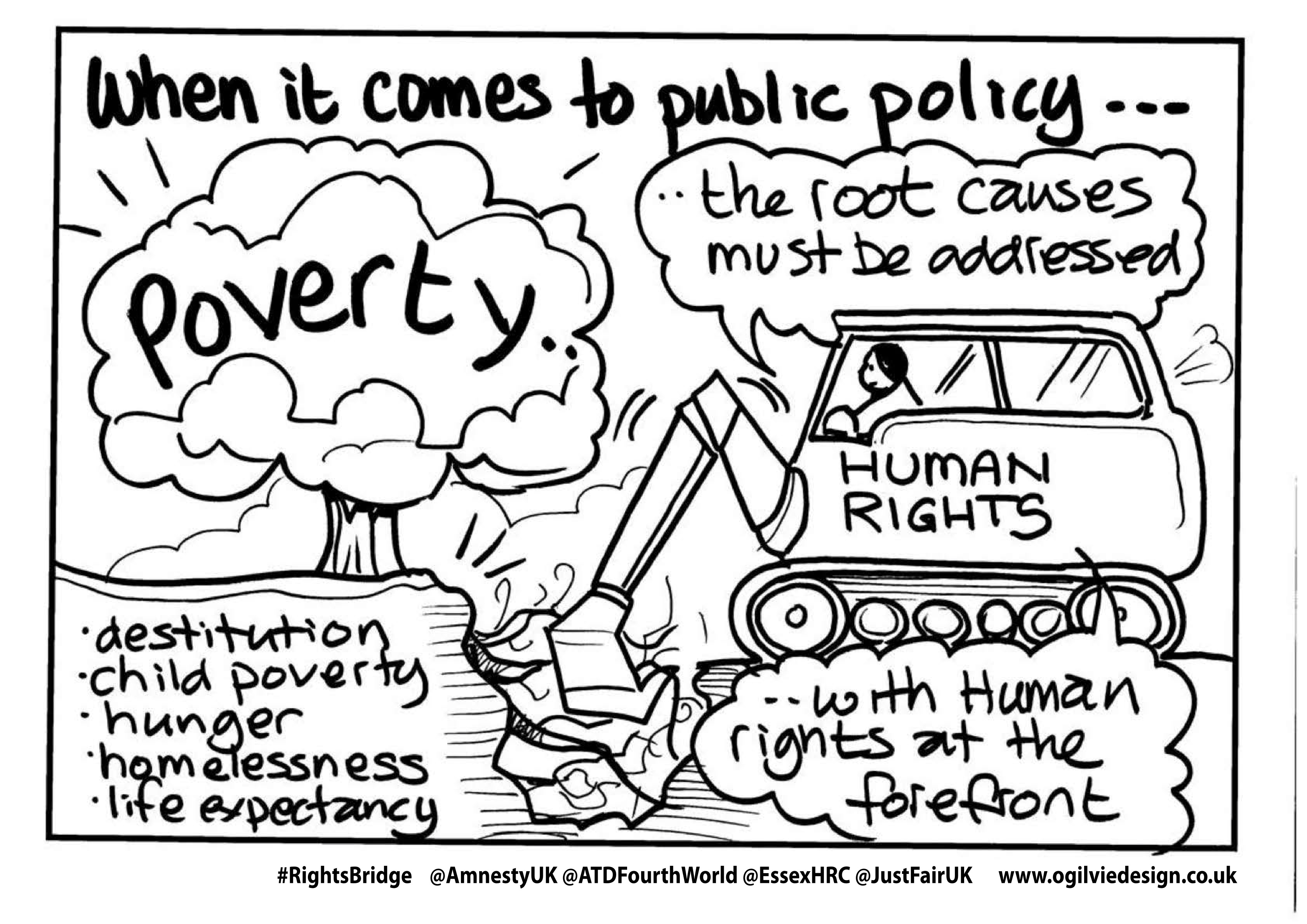 The root causes of poverty must be addressed with human rights at the forefront.

This was the first of a series of events organised by Just Fair, Amnesty International UK, ATD Fourth World and the Human Rights Centre of the University of Essex to build bridges between people with lived and learned experiences of poverty in the UK.

These organisations are working in partnership with a diverse group of individuals and community-based grass-roots organisations tackling poverty, inequality with some using human rights in their work.

The next event will take place on 10 February and is open to all who would like to attend. As well as contacting the organisations directly, you can follow #RightsBridge on social media. It will be an opportunity to learn from local advocacy led by people with lived experience of poverty and other forms of disadvantage, including a campaign for the right to work in Belfast, for refugee rights in Manchester, the right to food in Wales, the socioeconomic duty in Teesside, and a regional effort to address the digital divide around the North East, among others.

As a global movement of over seven million people, Amnesty International is the world's largest grassroots human rights organisation.

We monitor and advocate for economic and social rights in the UK. Through our research, campaigns, training and events we bring together social justice and international human rights law.

ATD FOURTH WORLD is a human rights based anti-poverty organisation, with more than sixty years experience of tackling inequality and promoting social justice in the UK.

Human Rights Centre of the University of Essex

The Human Rights Centre at Essex boasts a global reputation for excellence in the promotion of world-leading interdisciplinary human rights education, research and practice. At the heart of our work is the interface between the theory and practice of human rights, conflict and acute crises.