By Aaron Walawalkar, News and Digital Editor 7 Jan 2020
A 19-year-old found guilty of lying about a gang rape appears at court in Cyprus to be sentenced. Credit: YouTube.

A British teenager who was found guilty of lying about being gang raped while on holiday in Cyprus has been sentenced to four months in prison, suspended for three years.

The 19-year-old student’s defence lawyer immediately said that she will be appealing her conviction to the Supreme Court of Cyprus, and also consider appealing to the European Court of Human Rights, following a sentencing hearing on Tuesday (7 January).

A Famagusta district court judge had last week ruled that the woman, who cannot be named for legal reasons, had “wilfully indulged in public mischief” after claiming she was gang raped by a group of male Israeli tourists in Ayia Napa in July.

The tourists, aged between 15 and 22, were allowed to fly home after she allegedly retracted the complaint two weeks after the incident. She signed the statement of retraction after being questioned for eight hours by Cyprus police without a lawyer, translator, or family member present.

The prosecution claimed she invented the story after feeling ashamed that she had been filmed having sex with one of the Israelis. Her lawyers argued she made the statement to police under duress and while suffering trauma from the incident.

The suspended sentence means the woman can now return home after having to spend Christmas in Cyprus and foregoing a place at university due to the trial proceedings. She was also ordered to pay a fine of €140 (£119).

The woman’s British lawyer, Lewis Power QC, told The Guardian: “Whilst we welcome the fact that the sentence imposed today allows her to go home, we strongly contest the conviction and the fight for her innocence will go on regardless.

“We will be appealing the conviction and will take this case to the supreme court of human rights.

“We say and will maintain that this young girl was stripped both of her dignity and her basic human rights. She has been diagnosed with severe PTSD and this case has resulted in the deterioration of her mental health.”

The case has provoked outrage in the UK, Cyprus and Israel. On Monday protesters in London called for holidaymakers to boycott Cyprus, chanting “we believe her”.

Protesters from Cyprus and Israel could be heard chanting in solidarity with the woman outside Famagusta district court on Tuesday. 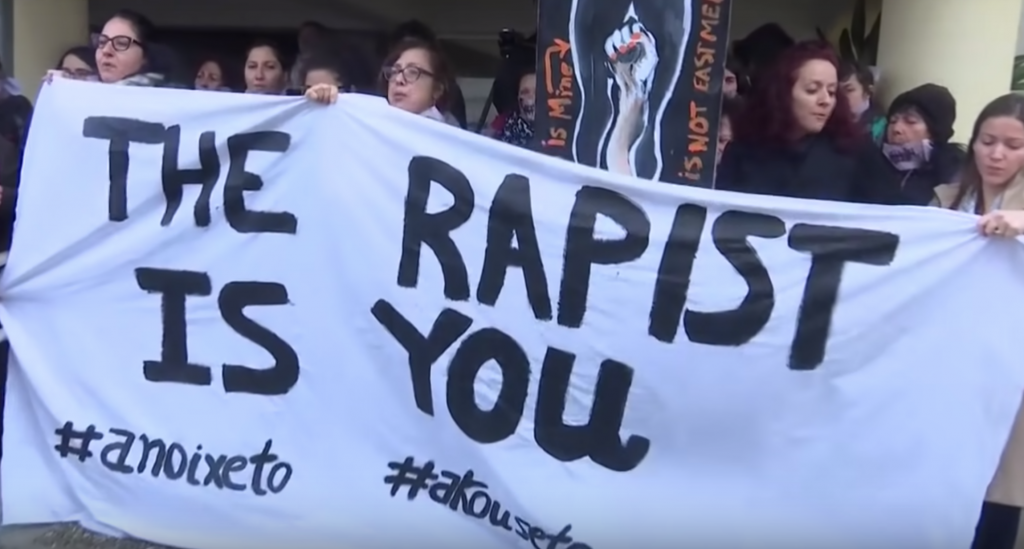 Protesters gather outside the court during the sentencing of a 19-year-old found guilty of lying about a gang rape incident. Credit: YouTube.

The right to a fair trial is protected by Article 6 of the Convention of Human Rights – which Cyprus is a signatory of.

In the case of a criminal trial, this gives us a number of rights, including the right to:

The European Court of Human Rights has previously said that being unable to access a lawyer in custody is a breach of Article 6.

It has also said that any confession made in these circumstances will irreversibly undermine the ability to have a fair trial, according to human rights barrister and EachOther founder Adam Wagner.

In a statement posted on Twitter, he said: “The absence of a lawyer during her ‘confession’, and the duress she says she was put under, would be enough to make the entire proceedings, including her conviction, a breach of her human rights.

“It also sounds like her conviction may have been premised on a faulty investigation.

“It is also possible she was unlawfully detained, if the police had no reasonable justification for arresting a charging her. She may also have been inhumanly treated and had her privacy breached because of the way her allegation of rape was dealt with.

“Instead of being fully investigated, it appears she has been treated as the perpetrator. This will all depend on the full facts of the case but as things stand the circumstances sound very troubling indeed.”

Adam Wagner played no role in writing this article.