Three anti-fracking campaigners who breached an injunction restricting protest at a shale gas site struck by what is believed to be the UK’s biggest fracking tremor have been given suspended prison sentences.

Christopher Wilson, 55; Katrina Lawrie, 41; and 44-year-old Lee Walsh were on Tuesday (3 September) sentenced to four weeks in prison suspended for two years after being found in contempt of court in July this year.

The three took part in a “lock-on” protest on 24 July 2018. With their arms fastened together inside tubes, they blocked traffic going in and out of the shale gas site near Blackpool in Lancashire – owned by energy company Cuadrilla – for around six-and-a-half hours.

Lawrie was sentenced to an additional two months in prison suspended for two years for breaching the injunction on a separate occasion. She ran into Preston New Road in August last year, causing a lorry to swerve out of the way.

Handing down the sentence, Judge Mark Pelling QC said: “I would say that breach of a court order is always serious as it undermines the administration of justice”.

He added: “The protest lasted for a number of hours and caused disruption and expense”.

The judge awarded costs against the campaigners which are believed to amount to at least £70,000.

Speaking outside the court, Katrina Lawrie told EachOther that the protesters intend to launch an immediate appeal against the committal for contempt of court.

Judge Pelling had previously ruled out imposing a prison sentence and said his options were either a fine or a suspended sentence or to give no penalty.

Defence barrister Richard Brigden, representing Wilson, had on Monday urged Judge Pelling to act benevolently in sentencing the protesters. He said that they “may be vindicated” by fracking tremors that have struck the site in the past week.

Regulators ordered Cuadrilla to suspend fracking at its Preston New Road site after tremors were recorded last Monday, including a tremor with a magnitude of 2.9 on the Richter scale, believed to be the biggest fracking-related tremor experienced in the UK.

Representing Cuadrilla, Tom Roscoe argued that the Judge should issue a prohibition order banning the three protesters from going within 250m of Preston New Road for 12 months as well as giving them a suspended sentence. 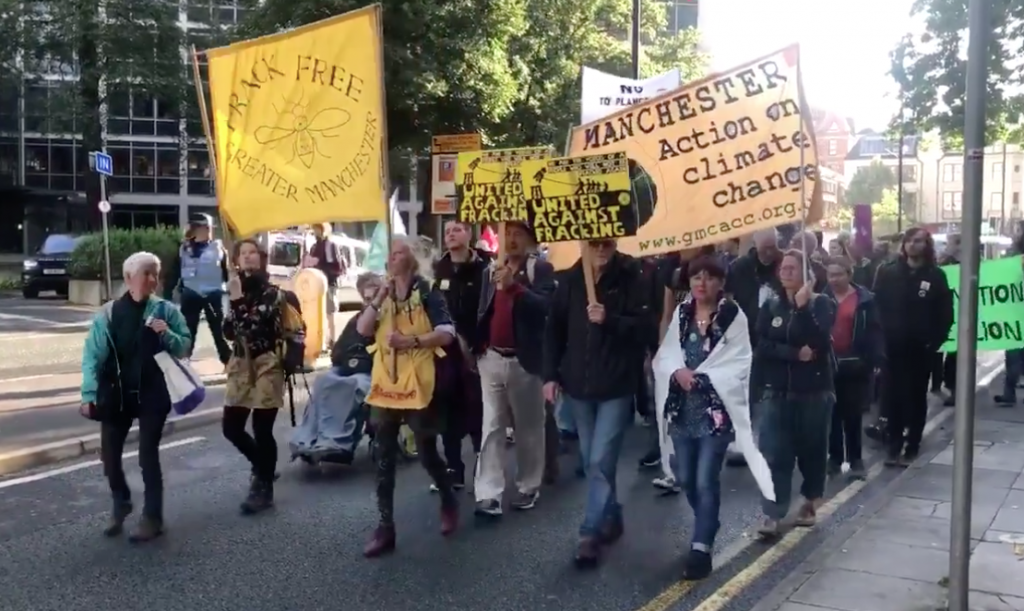 The protesters had also applied to lift a “draconian” injunction curtailing protest at the site while fracking remains indefinitely suspended, as well as applying to amend some of its restrictions on human rights grounds.

Judge Pelling refused to lift the injunction citing that this request “was mentioned for the first time yesterday” and so “the claimant [Cuadrilla] has had no opportunity to consider the point”. He also refused an application for the injunction to be reviewed every three months.

But he clarified that Articles 10 and 11 of the Human Rights Convention – which protect freedom of expression and freedom of assembly – are “qualified”.

“They do not trump the rights of others – including [Cuadrilla’s] rights under Article 1 of the First Protocol,” he said. This provision protects the right to “peaceful enjoyment” of property.

Judge Pelling accepted an amendment to the injunction clarifying the specific geographic area in Preston New Road which protesters must refrain from trespassing on.

He also agreed to alter the wording of a clause which restricts the types of protest activities that can be carried out at the fracking site’s entrance. A mention of “slow walking in front of vehicles” was removed along with all reference to protesters’ “intention of causing inconvenience or delay” to the claimant.

Defence barrister Adam Wagner, representing Lawrie and Walsh, had previously argued that the word “slow” is so subjective as to render the injunction unenforceable. While intentions are also inherently difficult to prove and subject to change from moment to moment, he added.

Including reference to the intentions of protesters made the injunction “too-wide”, creating uncertainty as to what conduct it covers, which can have a “chilling effect” on protest, he argued.

The amended clause now prohibits “standing, sitting, lying or walking in front of any vehicle” on the carriageway “with the effect of interfering” in vehicles passing by as well as “blocking or obstructing the site entrance” with “persons or things”.

However Judge Pelling permitted a separate reference to protesters’ “intention of damaging” Cuadrilla in a different clause of the injunction which is aimed at prohibiting criminal damage to the firm’s supply chain.

Wagner, arguing that this means the injunction is still too wide, requested permission to appeal against this to the Court of Appeal but was refused. However, permission is not required to appeal the contempt of court decision.

The original injunction had been approved by Judge Pelling in July last year.

Adam Wagner is chairman and founder of EachOther. He played no role in writing this article.